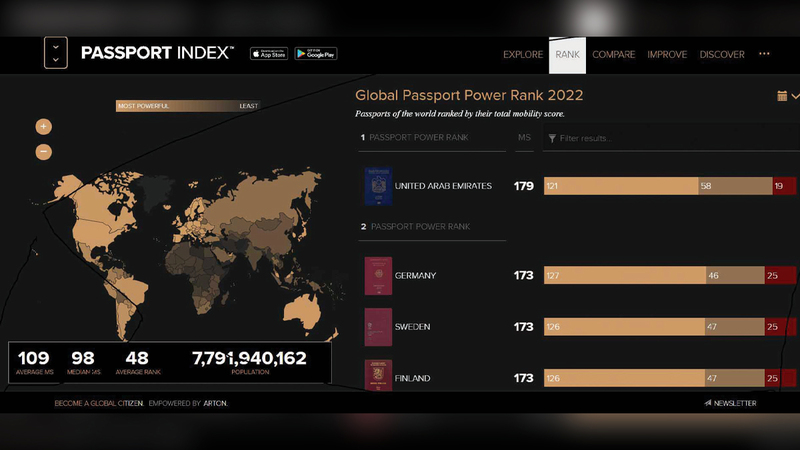 The Emirati passport increased the number of countries that allow its holder to enter it without a prior visa to 179 countries, compared to 177 countries in early November, to continue to maintain its first position, among the list of the most powerful passports in the world, according to the latest update published by Passport. Index, a subsidiary of Arton Capital, a global financial advisory firm.

Passport Index stated that the UAE passport currently grants its holder entry to 179 countries around the world, including 121 countries without a visa, and 58 countries whose visas can be obtained online or upon arrival, while 19 countries require a prior visa.

He pointed out that the holder of the Emirati passport can currently travel to 90% of the countries of the world without a prior visa, out of a total of 198 countries around the world.

According to the latest ranking in the global index of the list of the most powerful passports in the world, it ranked second after the UAE passport, the passports of 11 countries: Germany, Sweden, Finland, Luxembourg, Spain, France, Italy, the Netherlands, Austria, Switzerland, and South Korea. , as it grants its holder entry to 173 countries without a visa, followed by the passports of eight other countries that allow its holder to enter 172 countries, namely: Denmark, Belgium, Portugal, Norway, Poland, Ireland, the United States of America, and New Zealand.

Six passports that allow their holders to enter 171 countries are ranked fourth in the list, namely passports: Czech, Greece, Hungary, Japan, United Kingdom, and Australia, and came in fifth place with entry to 170 countries without a visa, passports of: Singapore, Malta, Lithuania , Slovakia, and Canada.

Freedom of movement is added to many countries of the world to the list of priorities that the UAE provides to its citizens, and the positive returns for ease of movement are not limited to enabling UAE citizens to move freely for the purpose of tourism, but also include economic, developmental and even humanitarian returns, by facilitating trade exchange and economic investment. For individuals and institutions. The Federal Authority for Identity, Nationality, Customs and Ports Security began issuing the new generation of the Emirati passport, with exceptional technical features that keep pace with the aspirations of the UAE government, and promote the development and modernization process, in addition to embodying the civilized status that the UAE has reached within the various government services provided, and to meet the latest security requirements. And technology in proving personal identity, as the new generation of the UAE passport is unique with unprecedented technical characteristics and highly complex security specifications to limit counterfeiting attempts.

ALSO READ  The Sheikh of Al-Azhar, Chairman of the Council of Muslim Elders, congratulates the Head of State on the 51st Union Day

Sessions of the Eighth Emirates Neurosurgery Conference kick off

“Abu Dhabi Pension”: extending the period of installments for “adding the service period” to 10 years