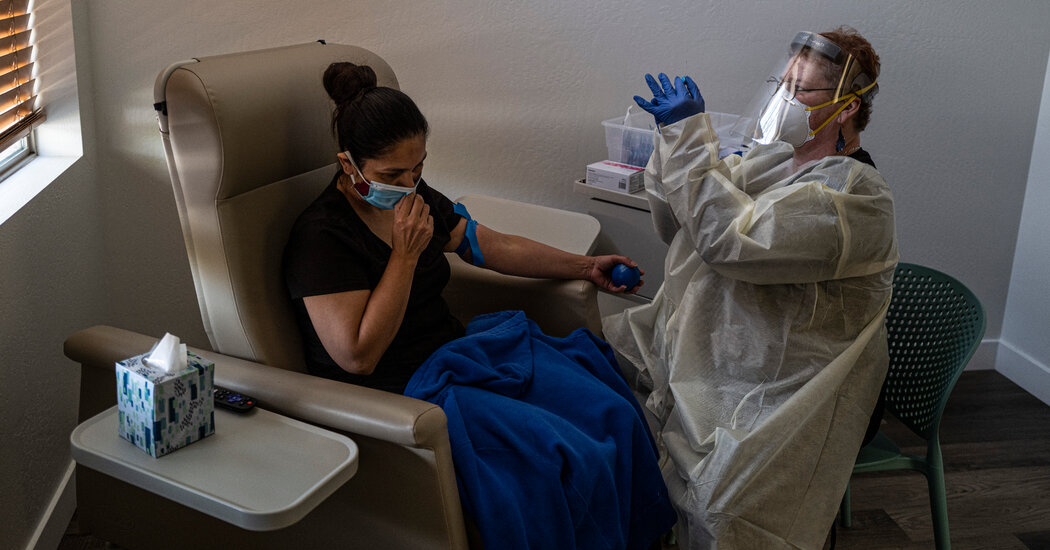 The Food and Drug Administration granted emergency clearance for the experimental antibody treatment given to President Trump shortly after he tested positive for the coronavirus, giving doctors another option to treat patients as cases across the country continue to rise.

The treatment, made by biotech company Regeneron, is a cocktail of two potent antibodies that have shown promise in early studies to control infection, reducing medical visits for patients who receive the drug early in their illness. . A similar treatment, performed by Eli Lilly, received emergency approval earlier this month.

The emergency authorization for the drug Regeneron has a limited scope: it is aimed at people who have tested positive for the coronavirus and who are at high risk of developing severe Covid-19. And the evidence so far suggests that Regeneron antibody therapy, like Eli Lilly’s, works best early in the course of the disease, before the virus has taken hold in the body. Like Eli Lilly’s treatment, Regeneron’s is not allowed in people who are hospitalized or in need of oxygen.

The emergency clearance raises immediate questions about who will have access to treatment. On average, more than 168,000 cases of coronavirus are reported every day in the United States, and hospitals are running out of beds in some areas of the country. Regeneron said it would have enough for only 80,000 people by the end of November, enough for 200,000 patients from the first week of January and 300,000 at the end of January. After that, the company said it would be able to increase production through a partnership with Swiss manufacturer Roche.

Regeneron has received more than $ 500 million from the federal government to develop and manufacture the treatments. Although the first 300,000 doses are provided free of charge, patients may be billed for the treatment given; it must be infused in a clinic or hospital.

Antibody treatments have drawn less attention than vaccines, but health officials have long hoped they could serve as a bridge until a vaccine for the coronavirus became more widely available. Two vaccines, one made by Pfizer and the other by Moderna, have recently been shown to be over 90% effective in early analyzes. Pfizer, which has completed its trial, submitted an emergency vaccine clearance request on Friday, and Moderna said it also plans to apply soon. Nevertheless, it will take weeks for the FDA to review the applications, and if it issues any approvals, access will be limited to people belonging to high risk groups.

Dr George D. Yancopoulos, President and Scientific Director of Regeneron, said in a statement he was encouraged by recent vaccine results, but “there remains a need to treat patients who develop Covid-19, especially more than some may not have had access to vaccination or were not protected by vaccination. “

Regeneron saw an explosion of publicity in October, when Mr. Trump was infused with his cocktail and then enthusiastically promoted the drug as something that made him feel like a superpower. In one published video on October 7, the president claimed without evidence that it had cured him and that he had authorized it – which he had no authority to do.

Whether the Regeneron treatment helped Mr. Trump remains unclear. He received several medications at Walter Reed National Military Medical Center, and many people are recovering from the virus on their own.

The rise and fall of Carl Lentz, the famous pastor of Hillsong Church