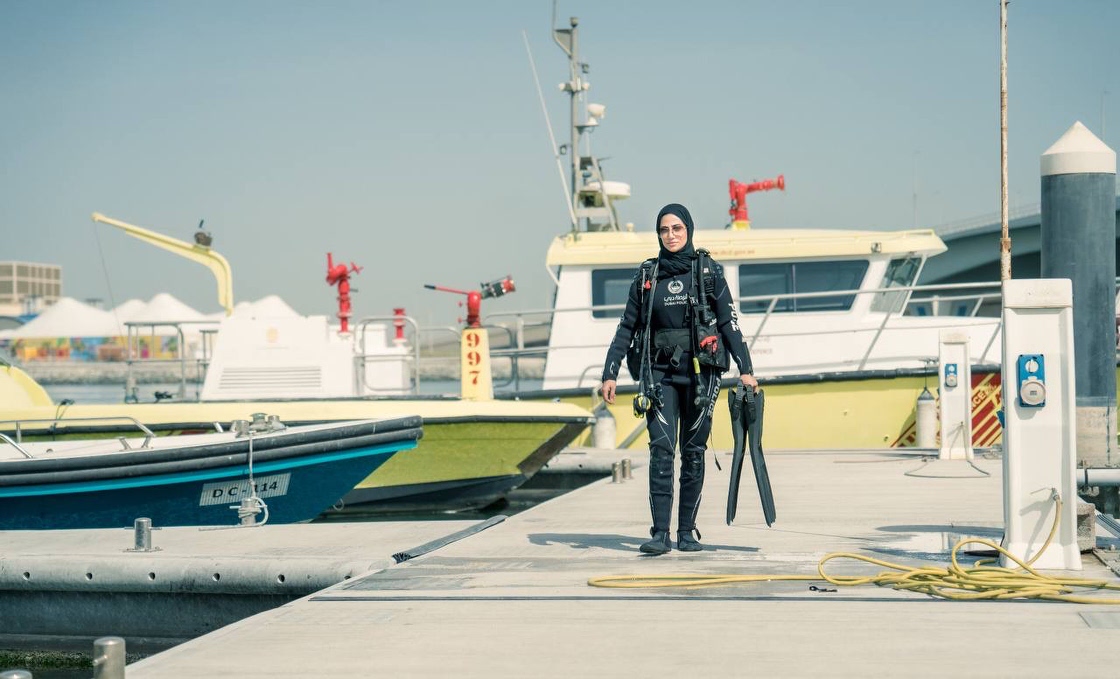 Sergeant Kholoud Abdullah Al-Marri is the first female member of the Dubai Police working in the field of detecting underwater explosives, in addition to her work in the security inspections and explosive disposal team in the Explosives Security Department of the General Department of Organizations, Facilities and Emergency Security in Dubai Police, thus forming a distinctive addition to the role of the female component in police work.

Acting Assistant Commander-in-Chief for Operations Affairs Major General Abdullah Ali Al Ghaithi said that the Dubai Police General Command has a distinguished and proactive human cadre in various disciplines, and that the female component of Dubai Police has a basic, important and integrated role in roles with men in various disciplines and tasks without distinction, as Today, women participate in the implementation of various tasks, including tasks that were the preserve of men in the past.

Major General Al Ghaithi added that the Explosives Security Department is rich with highly specialized competencies, and has a wealth of knowledge and scientific and applied experience, as well as numerous experiences and participations that make it one of the most professional departments in this field in the region, stressing that these efforts harnessed to develop human resources are one of the pillars On which the Dubai Police is based, which would ensure the achievement of strategic goals in enhancing the security and safety of the community.

For his part, Director of the Explosives Security Department, Colonel Hisham Al-Suwaidi, explained that the work of Sergeant Kholoud Al-Marri is to detect underwater explosives in various types of water bodies. It was established in the year 2020, and then she joined advanced diving courses to form an integration in her work with the security inspections and explosives disposal team.

Colonel Al-Suwaidi added that the specialized training program that Sergeant Kholoud Al-Marri and her colleagues joined in the team lasted for 6 months, during which they learned many skills related to the detection of explosives, how to carry out security inspections in various locations and how to identify suspicious objects, as well as how to employ artificial intelligence. In this field to reduce the risks that workers in this field may be exposed to while dealing with unknown objects and packages, and then worked to develop its field to catch up and train in diving and detect explosives under water, which is an important addition to its work.

In turn, Sergeant Kholoud Abdullah Al-Marri said that she is proud of her work in this field, which contains many challenges, and that she loves the challenge and is constantly working to develop herself in various disciplines that support her work and functional tasks, and that the Dubai Police General Command greatly supported her and opened the way for her to delve into and experience for various tasks.

Al-Marri added that the General Department for the Security of Organizations, Facilities and Emergencies provides all support and meets the needs requested by the employee, and creates a stimulating and encouraging work environment that contributes to supporting young people and raising the ceiling of their ambitions. with youth.

It is worth noting that Sergeant Kholoud Al-Marri completed 16 years of work in the Dubai Police, where she joined in 2006, and is one of the first in the line of individuals from the female component to join the cavalry team and the explosives team and received many honors, worked in many work teams and participated in security teams On many major occasions, she also holds a motorbike license, and has enrolled in many specialized courses and programs.

The Arab Media Forum announces the partners of its 20th session

Suspect arrested for stealing tuition fees for 1,500 students and escaping