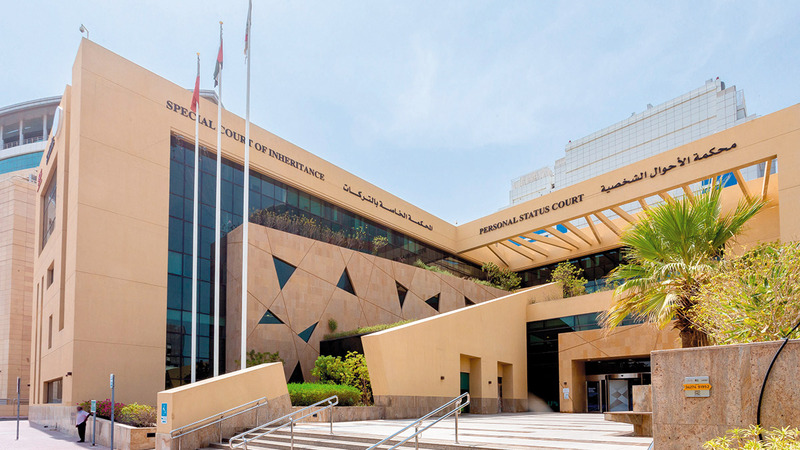 The President of the Special Court for Inheritance in Dubai, Judge Muhammad Jassim Al Shamsi, said that the new court reduces the three degrees of litigation in one circuit, and issues final rulings that can be implemented immediately for the new procedures, which saves time and effort, and makes it easier for dealers.

He added, during a dialogue session on the issue of the special court for inheritance, through the judicial space broadcast by Dubai Courts via its smart platform on Twitter, that the idea of ​​establishing the court was studied by the Supreme Committee for Legislation in the Emirate of Dubai and the Ministry of Justice, and accordingly it was stipulated in the regulation. The organization of the Civil Procedures Law in Chapter Nine relating to the organization of the work of special courts, then a decision was issued to establish it in the Emirate of Dubai under the name “Special Court for Inheritance”.

He explained that the court mainly aims to preserve social and family ties, protect them from disputes that may arise due to inheritance, and collect lawsuits and requests related to or arising from the estate in one lawsuit before a single judicial authority, pointing out that disputes related to inheritance were not limited to the Status Department. personal, but extends to other circles related to the nature of the estate funds, whether commercial, civil or real estate, but the court will contain all these aspects in one circle.

She pointed out that the court consists of one degree of litigation headed by a cassation judge, membership of an appellate judge and a first instance judge, in addition to a preparation judge, of no less than a first instance judge, who exercises his competencies stipulated in the Civil Procedures Law and its regulations and their amendments, as the case is prepared and prepared. Within 30 days from the date of its registration, and it is decided within 12 months, and its circulation may not be extended except with the approval of the President of the Court, and in the presence of strong reasons that require it.

She emphasized that the establishment of the inheritance court at a single level of litigation does not prejudice the guarantees of achieving full justice for the parties to the lawsuits, as its rulings may be challenged by way of seeking reconsideration, and it may also retract its rulings in accordance with the controls and procedures stipulated in the Civil Procedures Law and its amendments, as well as being subject to The umbrella of the judicial inspection, like other courts, to ensure that its rulings are issued with the highest degree of accuracy and integrity.

Hamdan bin Mohammed: We have clear strategic goals that we are working to achieve according to Mohammed bin Rashid’s vision for the future