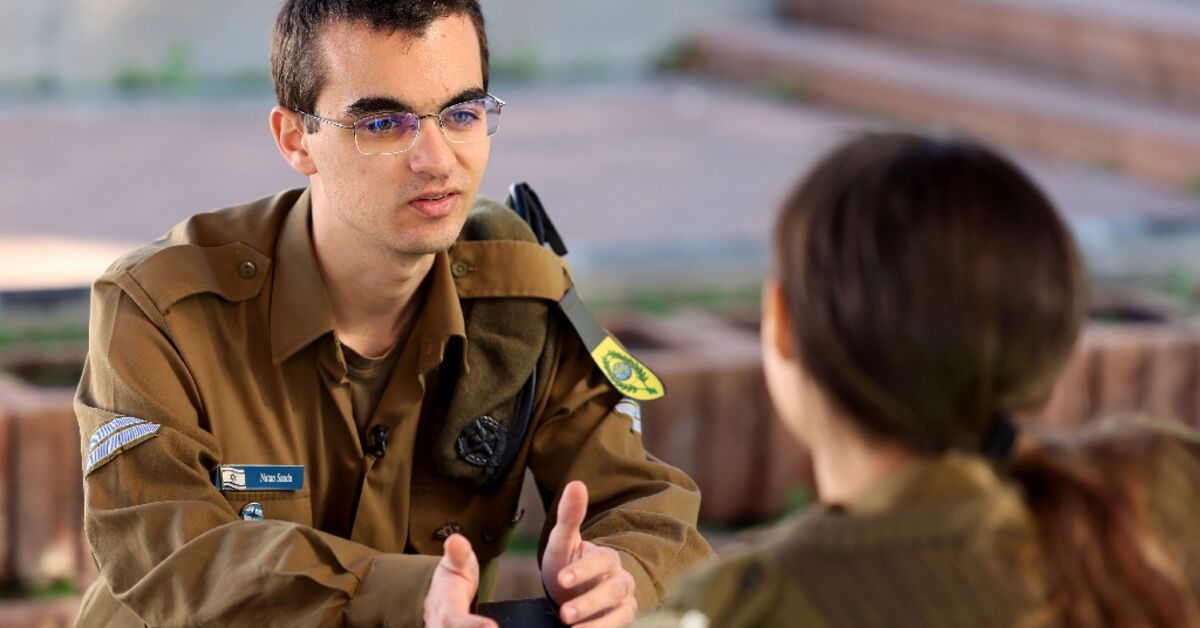 Israeli soldier Nathan Saada works at his computer at an army base in Tel Aviv, where he is part of a specialized program for military personnel with autism.

About 200 people with high-functioning autism have joined the ranks since the program – Titkadmu (Move Forwards) – launched in July 2021.

“I wanted to enlist because in Israel military service is important. It’s something every young person should do, and I also wanted to have this experience,” said Saada, proudly wearing a Titkadmu badge on his khaki uniform.

The 20-year-old has an administrative role and is putting the finishing touches to a file behind his desk.

“I have responsibilities; they count on me,” says Saada from the northern city of Haifa.

Military service is mandatory for most over-18s in Israel, with men serving for 32 months and women for two years.

For those enlisted, military service is a rite of passage.

The military plays a central role in the society of Israel, which has fought wars with all of its neighbors since the state was founded in 1948.

People with autism are exempt from military service, although they have been welcome for short courses since 2008.

For years, few have signed up, said Brigadier General Amir Vadmani of the army’s personnel department.

That changed with the creation of Titkadmu, the brainchild of an officer with autism.

Apart from combat units, Vadmani said, “you find them in all departments. In the air force, the navy, the ground forces, in the intelligence unit, everywhere”.

“Soldiers with autism have tremendous potential” and are a real asset to the military, he added. “These young people want to prove that they can succeed, that they are like everyone else.”

Vadmani said it is particularly important to integrate people with autism into the military as the number of those diagnosed is rising.

According to the Israeli Society for Children and Adults with Autism (ALUT), the number of diagnoses is increasing by an average of 13 percent per year.

This is partly due to an expansion of the criteria, according to ALUT spokeswoman Lital Porat.

One in 78 children in Israel will be diagnosed with autism, the group says. This compares to one in 100 children worldwide, according to an estimate by the World Health Organization.

People with autism may benefit from joining the military because it “provides a framework that prepares them to live as independent a life as possible,” Porat said.

As part of the Titkadmu program, the army has adapted its training methods and established a support network.

Once a week, Saada is visited at his base by a fellow soldier, Liri Shahar, who is charged with monitoring what the military calls its “special” groups.

“We tell each other how the week went, if something special happened,” says 19-year-old Shahar, who acts as an intermediary between Saada and his commander. “We talk about everything.”

Saada was diagnosed at age four and said he sometimes struggles with social interactions and communication.

“It helps me a lot to have someone I can turn to, who can advise and help me,” he said.

Although the Titkadmu program is still in its infancy, Vadmani said it has long-term goals for the recruits.

“The idea is to help them integrate into the job market, by taking advantage of the skills they’ve acquired during their service,” he said.

Saada already has clear ambitions for his life outside the base when he is fired next year.

“I would love to be a filmmaker,” he said with a smile. “I’ve already written several screenplays.”

Netanyahu counts Iran and Sudan as victories after Blinken’s visit

A Palestinian teenager dreamed of becoming a chef before the attack, teachers say