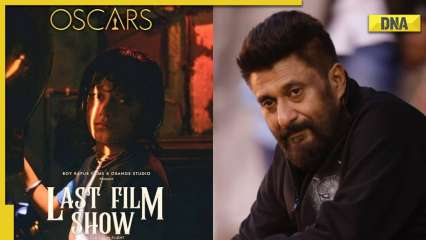 Kashmir Files director Vivek Agnihotri took to Twitter to congratulate the creators of the Last Film Show after the Film Federation of India (FFI) as India’s official entry for the Oscars 2023.

Vivek Agnihotri tweeted: “Congratulations to the entire team at #LastFilmShow (Chhello Show) for being selected as India’s official entry. I wish them the best film award at the #Oscars2023. Thank you to all the benefactors and especially the media who supported #TheKashmirFiles.”

Congratulations to the entire team of #LastMovieShow (Chhello Show) for being selected as India’s official entry. I wish them the prize for best film on the #Oscars2023

I thank all the benefactors and especially the media we were looking forward to #TheKashmirFiles. pic.twitter.com/nNjOe2Fv3D— Vivek Ranjan Agnihotri (@vivekagnihotri) September 20, 2022

Social media users responded to the tweet, one of them writing: “Show The Kashmir Files in the new theaters opened in Kashmir!” The second wrote, “I still support Kashmir Files because it could have taken the unspoken and unknown human atrocities on the world stage.” The third person commented: “Thank god rrr didn’t send rrr to oscar as he says this despite being a rajamouli fan.”

The film, starring Bhavin Rabari, Bhavesh Shrimali, Richa Meena, Dipen Raval and Paresh Mehta, had its world premiere as the opening film at the Tribeca Film Festival last June. The film is inspired by Nalin’s own memories of falling in love with films in rural Gujarat as a child.

It won multiple awards during its festival run, including the Golden Spike at the 66th Valladolid Film Festival in Spain, where it also enjoyed commercial success during its theatrical run.

However, there were assumptions that Vivek Agnihotri’s film The Kasmir Files of SS Rajamouli’s RRR starring Jr NTR and Ram Charan will be India’s entry for the Oscars 2023. (With input from PTI)

Selma Blair Says Being Blindfolded On ‘Dancing With The Stars’ Was...

Selma Blair Says Being Blindfolded On ‘Dancing With The Stars’ Was...