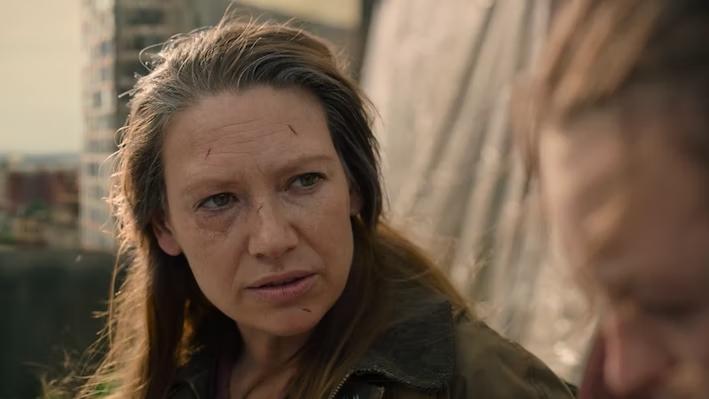 In HBO’s second episode The last of us, we finally get to see what life is like outside the Quarantine Zone (QZ) and what the world has become after two decades of the Cordyceps pandemic.

It is beautiful and terrifying at once, a breathtaking look at the demise of human civilization. Fallen skyscrapers, brick buildings overrun with vines and mold, highways in ruins. Everything we built is abandoned.

Our trio of survivors, waking up from a night spent in the wild of what was once Boston, find themselves at a crossroads of sorts. Ellie (Bella Ramsey) wakes up to find Tess (Anna Torv) and Joel (Pedro Pascal) investigating her, clearly unsure of what to do next. They offer her a piece of their jerky, but she has sandwiches. She sticks to the sandwiches.

Joel in particular does not believe she is immune. But she explains that this was the whole point of the mission that Marlene (played by Merle Dandridge who also played Marlene in the video game) and the Fireflies were on. They would take her to some doctors out west who would study her to make a vaccine. Still, Joel says he’s heard it all before.

Tess manages to convince him not to return. She doesn’t think it’s safe for Ellie. If anyone finds out she’s been bitten, they’ll kill her. Besides, this is their only chance to get a vehicle and head west to find Tommy (Gabriel Luna), Joel’s brother who may or may not be in trouble.

So after some back and forth they set off. The Capitol is not far, but the road is treacherous. The ways I should say. There’s the safer long route and the “we’re basically dead” short route, though neither proves to be a safe option. They wade through a flooded hotel that Ellie immediately finds enchanting. She is bubbling with pleasure. Have they ever stayed in a place like this? she wants to know. When she sees the front desk, she sloshes over to it and pretends to be the clerk checking guests into their rooms. It’s all fun and games until she finds a surprise skeleton.

The road ahead is blocked, and when they finally reach the upstairs balcony, they look down on a grim scene: hundreds of zombies scattered on the pavement below. They shift and move in ripples, and we discover that they are all connected by underground hyphae. The zombies of The last of us are a beehive. If someone sees you miles away, they can warn the horde – a grim foreshadowing of things to come.

So they take the shortcut through a museum completely covered in mold. But Joel discovers that it has dried up and that the way forward, he reasons, may finally be safe. But once inside, they find a recently deceased human and continue in silence. Unfortunately, the building is dilapidated and falling apart. The stairs almost give way under their weight. When they reach the top floor, a new terror awaits: the horribly mutated, fungus-headed ‘Clickers’ – more dangerous, violent zombies who are blind but have extremely sensitive hearing. Any noise will immediately draw them to you.

They make a horrible clicking sound as they sneak through the dark museum. Our heroes try to sneak past, but they don’t quite succeed and what follows is a desperate fight for survival. Tess and Ellie run and are quickly separated. Joel shoots his revolver at one of the Clickers, but runs out of ammo and needs to reload. The whole scene is a nice dose of intense action and suspense, but the trio escapes almost unharmed. Ellie has another bite on her arm, right next to her scar from the previous bite. “Well, if it had to happen to one of us,” she says, fair enough. They cross a wooden plank bridge and continue their way outside to the main building.

When they reach the rendezvous, they find a bleak scene of death and violence. All the fireflies are dead. Joel says it wasn’t an attack by bandits or FEDRA soldiers. Instead, it seems that some of the fireflies turned and everyone died in the ensuing fight.

Here things take a turn for the tragic. Joel again states that they should return to the QZ. Tess says she’ll stay regardless and then says sometimes you’re just unlucky. Ellie realizes what happened before Joel does. Tess was bitten by one of the Clickers right between her shoulder and neck. At this moment they hear something. The fungus in the Capitol has activated and sent a warning to the horde of zombies they saw earlier. We see the zombies get up off the ground and start running fast. These are not walk dead. They throw themselves forward in a horrible attack.

Tess tells them to go. She will buy them time. The Fireflies have stored all of their ammunition, grenades, gasoline, and other goodies inside, and she begins to dump it all, pouring the gas on the floor and throwing grenades on the floor. Without saying a word, Joel grabs Ellie and runs off. She tries to fight him – she doesn’t want to leave without Tess – but he just pulls her with him.

The zombies charge into the building and run past Tess as she fumbles with her lighter. She can’t light it. One of them turns and sees her and has to acknowledge that she is already spinning because instead of running towards her and biting, he slowly approaches. As she flicks the lighter, he opens his mouth and bends over for a grotesque kiss. Fungus vines grow out of his mouth and twist in hers – and eventually the lighter catches fire. She lets go and it falls to the floor.

Outside, Joel and Ellie watch as the building goes up in flames.

This episode was laser-focused on Joel, Tess, and Ellie, which was great for a lot of reasons, but mostly because we got to know both Ellie and Tess a little bit better, and just in time for Tess to die tragically. But the opening piece takes place a world away in Jakarta, where the outbreak appears to have started. Remember, Joel, Tommy and Sarah all discussed Jakarta in the kitchen at the series premiere. Well, now we know why.

Soldiers track down an elderly woman in a restaurant. She turns out to be a mycologist at the university and they need her expertise. They take her back to their base where they show her the corpse of a woman infected with cordyceps. As she examines the body, we see the tendrils begin to grow out of the corpse’s mouth. She panics and flees the exam room in shock.

The general explains the situation. The woman worked in a flour factory and attacked her colleagues. She had to be killed. The mycologist asks if any other workers have been infected and learns that fourteen others have not shown up for work. Their whereabouts are unknown. The news terrifies her. When the general asks what to do, she tells him to bomb the city. Bomb the city and kill everyone in it. There is no cure, no vaccine, no way to stop this without mass destruction. Then she asks for a ride home. She wants to spend time with her family before the end of the world.

We learn through conversations between Joel, Tess, and Ellie that bombing is exactly what happened around the world to slow the spread. Giant craters poke through Boston’s devastated landscape. It didn’t work everywhere, but in Boston it gave them time to establish a QZ.

I really enjoy getting this broader glimpse of the apocalypse. In the game you actually only follow the main characters on their trek through America. In the show, you get a broader look at the global events, but also – as you’ll see next week – deeper dives into individual characters and relationships that were only briefly mentioned in the game. This helps shape the story, world, and characters.

I also really loved Ellie this episode. I’ve heard some people say they can’t stand her or think she was out of place, but I think Ramsey does a great job playing the spunky teen. She is curious, funny, stubborn but not stupid. She knows how to survive and she is not meek or timid, but not too brash either. We’re only just beginning to see her relationship with Joel develop. Next week they are on their own.

Finally, I really loved the Clickers! These are not your average zombies. Even the regular Infected in this show are scary, but the Clickers are terrifying – which is exactly how they were in the video games. I’m so impressed with the level of detail here and while they’re making some changes to the game, it’s close enough to the source material in my book. And that is rare these days! Bravo HBO! And bravo Craig Mazin and Neil Druckmann for another great episode.

What did you think of this week’s episode of The last of us? Are you a newcomer to the story or have you played the games?

Watch my video review of this episode below:

‘Overwatch 2’ will remove card pools, but maybe not forever

‘Marvel Snap’ seems determined not to let me play my cards

It’s 32 million PS5 sales for how many Xbox sales exactly?