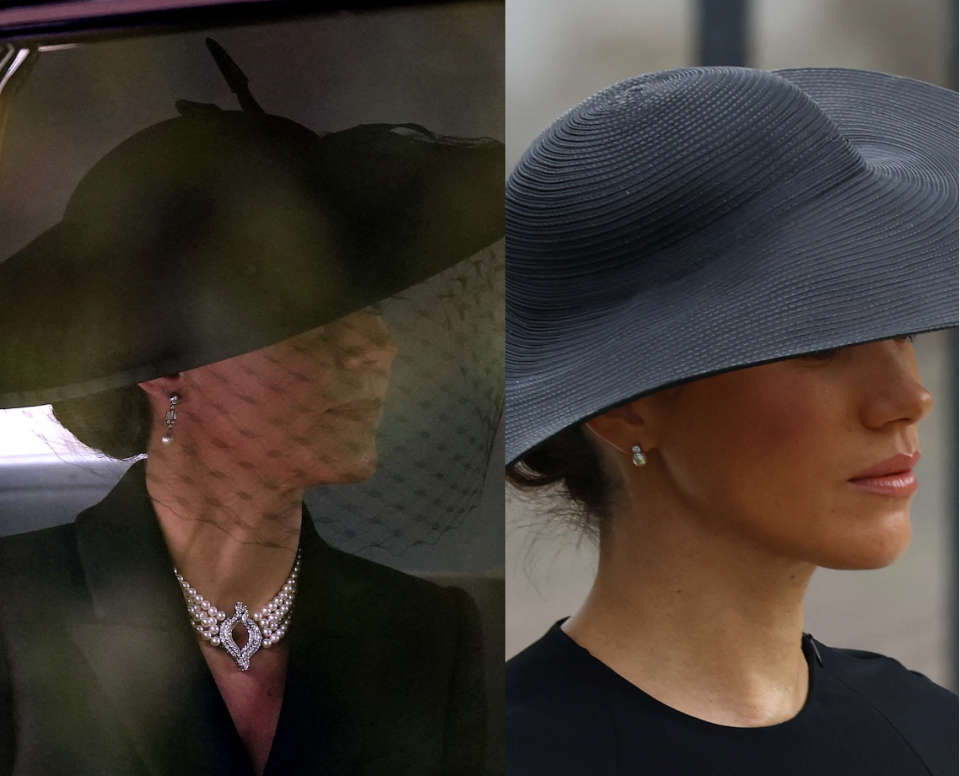 While more than 2,000 people gathered to attend the Queen’s memorial service at Westminster Abbey in London, the Princess of Wales and Duchess of Sussex showed up in full black in accordance with requirements during a mourning period. Both also feature jewelry inspired and donated by the late Queen.

Middleton’s necklace was probably the standout piece of the day, as the four-string pearl and diamond choker that belonged to the Queen has a storied history with both the late monarch and Middleton’s late mother-in-law, Princess Diana.

The Princess of Wales also wore the Bahrain Pearl Drop Earrings from the Queen’s Jewelery Box, a wedding gift from the ruler of Bahrain in 1947.

The earrings, decorated with multiple diamonds and a dangling pearl, were worn by Middleton at the memorial service in 2016. Queen Elizabeth II had worn the same accessory at the event the year before.

Markle also wore a significant pair of diamond and pearl earrings, which she wore on her first solo outing with the Queen in 2018.

The Duchess of Sussex honored the important outing and her time with the Queen by wearing the gift again when the Queen was buried.

“Let’s see what fighting feels like in our marriage!” : This time it’s personal for ‘Voice’ coaches Blake and Gwen

The Bharat Express News - October 4, 2022 0
Britain's richest households will still earn nearly 40 times as much in cash as the poorest of Kwasi Kwarteng's tax-giveaway budget, even after its...