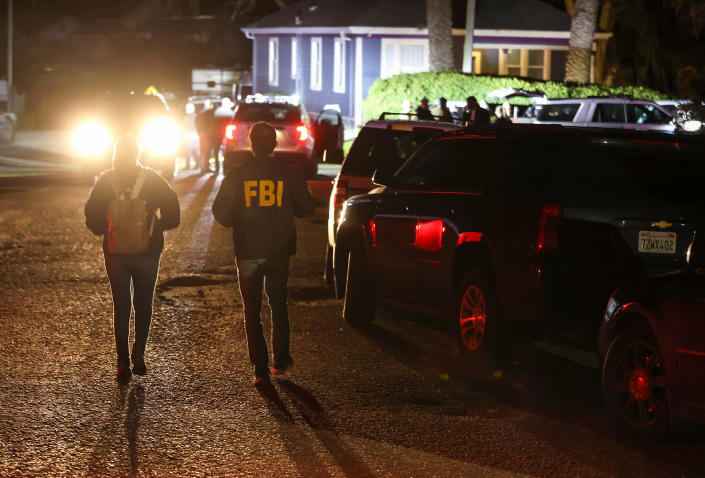 The murder of seven people, gunned down in a small Northern California town, was an act of “workplace violence” that victimized members of the “migrant community,” officials said Tuesday.

“The only known connection between the victims and the suspect is that they may have been co-workers,” San Mateo County Sheriff Christina Corpus told reporters in nearby Redwood City. violence.”

Five of the fatally injured victims were men, Corpus said at a later press conference. Two were women. A man who was hospitalized with life-threatening wounds on Monday is in stable condition, she said.

Zhao was arrested in the parking lot of a sheriff’s substation in Half Moon Bay shortly after the attacks.

“The semi-automatic pistol was legally purchased and owned,” Corpus said.

Sheriff’s investigators also said they are struggling to notify loved ones of victims who were described as “members of the migrant community,” who were of Asian and Hispanic descent.

“Since some of these victims were members of our migrant community, this presents a unique challenge when it comes to reports (of survivors) and identifications,” Corpus said.

Robert Tripp, special agent in charge of the FBI’s San Francisco field office, said the agency was providing technical and forensic support in the aftermath of the shooting. The agency was transitioning to providing services to victims, he said.

While investigators did not immediately disclose what, if any, criminal record Zhao might have, it was not a major concern, officials said.

“I will say there were no specific indicators that would have led us to believe that he was capable of such a thing and that he was not known to us,” said Sheriff’s Captain Eamonn Allen.

Zhao, who detectives originally said was 67, will appear in court for the first time on Wednesday afternoon.

“We’ve never had one in this county with so many deaths … all at once,” the prosecutor said. “So it’s a very hectic scene.”

The quaint coastal town of about 11,000 is known for its farms — there are more than 100 in the area, according to Senator Josh Becker, whose district includes Half Moon Bay — and many people from out of town visit for its winter squash.

“Many of you come here for pumpkins and ignore the farm workers,” Half Moon Bay Vice Mayor Joaquin Jimenez told reporters Tuesday. “Not today.”

California Governor Gavin Newsom recalled speaking to migrants from China who saw the shooting but did not understand what they saw.

“They thought they were acting,” Newsom said. “They had never heard such a sound. They had never seen such a scene. They didn’t know how to understand a gunshot wound.’

“Only in America do we see this kind of massacre,” he added.

President Joe Biden extended prayers for the victims, saying in a statement: “For the second time in recent days, California communities are mourning the loss of loved ones in a senseless act of gun violence.”

The Half Moon Bay murders came in the midst of a horrific 72-hour period of gun violence in California and across the country.

Dallas Zoo is offering a $25,000 reward for information on tampering with animal habitats

Man dies after a wild brawl breaks out during a high...