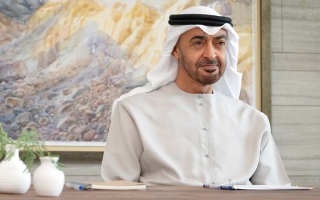 His Highness Sheikh Mohammed bin Zayed Al Nahyan, President of the State, declared 2023 the “Year of Sustainability” in the United Arab Emirates.

His Highness said in a post on Twitter: “God willing, 2023 will be (the year of sustainability) in the UAE, coinciding with our hosting of (COP 28) .. Our history and approach in preserving the environment and the sustainability of its resources is constant .. And I call on our society to adopt new ideas and qualitative initiatives It embodies the civilized face of our country.

The “Year of Sustainability”, which was launched under the slogan “Today for Tomorrow” – through its various initiatives, events and activities – aims to shed light on the UAE’s rich heritage in the field of sustainable practices, since the era of the founder, the late Sheikh Zayed bin Sultan Al Nahyan, “may God rest his soul.” In addition to spreading awareness about environmental sustainability issues, encouraging community participation in achieving sustainable development, and supporting national strategies in this field towards building a more prosperous and prosperous future.

The year also aims to highlight the efforts made by the United Arab Emirates in promoting international collective action to address the challenges of sustainability and its role in searching for innovative solutions that benefit everyone on the international scene, especially in the fields of energy and climate change.

His Highness Sheikh Mohammed bin Zayed Al Nahyan stressed that sustainability has been a fundamental issue in the UAE society since ancient times, pointing out that «the UAE has presented, since its inception, a distinguished model in the field of preserving the environment and preserving resources. The late Sheikh Zayed bin Sultan Al Nahyan (may God rest his soul in peace) was a global leader and pioneer in the field of environmental and climate action, and he left remarkable imprints in this field, and today we are following his path.

His Highness, the President of the State, added, “The slogan chosen for the Year of Sustainability (Today for Tomorrow) embodies the UAE’s approach, goals and vision in the field of sustainability and its responsibility in facing challenges; Through our work, efforts and initiatives today, we will create a better tomorrow for us and our children and grandchildren to leave a positive legacy for future generations, as our fathers and grandfathers left us.

His Highness stressed that what “acquires (the Year of Sustainability) is of particular importance because it is a year in which the UAE hosts the largest international event in the field of climate action, which is the Conference of the Parties to the United Nations Framework Convention on Climate Change (COP 28), where we are working to make it a milestone in the march of the world towards addressing the threat of climate change.” His Highness called on members of society and its institutions to interact positively with the initiatives and activities of the “Year of Sustainability” to achieve the desired goals.

It is noteworthy that the “Year of Sustainability” embodies the rich record of the United Arab Emirates in preserving sustainability through its inspiring initiatives, efforts and strategies in this field, foremost of which is the “strategic initiative to achieve climate neutrality 2050”, which confirms the state’s commitment to promoting environmental protection and economic progress, and consolidating the country’s position An ideal destination to live, work and create thriving communities.

The announcement of the “Year of Sustainability” comes at the end of the activities of the “Abu Dhabi Sustainability Week” 2023, with the participation of a large number of state leaders and officials concerned with the issue of sustainability, which confirms the UAE’s pivotal role in enhancing international awareness of this issue and the associated challenges and priorities. The role of the UAE in promoting work in the field of clean energy and building effective partnerships in this field benefits the whole world, foremost of which is the strategic partnership with the United States of America to invest 100 billion dollars in implementing clean energy projects in the UAE, the United States and various countries of the world.

The declaration of His Highness Sheikh Mohammed bin Zayed Al Nahyan, the current year, as the Year of Sustainability in the Emirates, was the culmination of the country’s rich march in the field of sustainability and environmental preservation, and a turning point in advancing international efforts to promote climate action to preserve the planet, and pave the way towards the COP28 Conference of the Parties.

The UAE has an inspiring path of action for the environment that coincided with its establishment in the early seventies of the last century, in addition to climate action that began with its signing of the Montreal Protocol on Substances that Deplete the Ozone Layer in 1989.

In the early 1990s, it was agreed internationally to launch the United Nations Framework Convention on Climate Change to represent the first global move to confront this challenge, and in 1995 the UAE joined the agreement to participate in the international movement for climate action.

After the launch and adoption of the Kyoto Protocol, which binds developed countries with the goals of reducing emissions, the UAE ratified the protocol in 2005 as the first country among the world’s major oil producing countries.

With the modernization and development of climate action goals to focus more on addressing the problem of global warming, in addition to further reducing greenhouse gas emissions with the launch of the Paris Climate Agreement in 2015, the UAE hastened to join the agreement and sign its provisions as the first Gulf state and one of the first countries in the region.

The UAE believes that achieving the necessary global transformation in the energy sector depends on the concerted efforts of partners. The energy sector also needs qualitative, commercially viable innovations, with investments directed towards clean energy solutions that can be developed on a large scale, new solutions for major industries, and increased efficiency in the use of natural resources, which contributes to reducing the consequences of climate change while ensuring sustainable energy supplies.

ALSO READ  On the National Environment Day.. 9 main stations in the UAE's march towards a sustainable future

The year 2006 represents a turning point in the march of the UAE’s work for the environment and climate, which witnessed the launch of the Abu Dhabi Future Energy Company “Masdar” as a global Emirati model for the clean energy sector, sustainable development and sustainable urban development.

The founding of Masdar and the growth it witnessed embodies the leadership’s vision aimed at diversifying the economy and energy sources.

Masdar is currently active in more than 40 countries on six continents, where it has invested and is committed to investing in projects around the world, with a total value exceeding $30 billion.

Masdar is entering a new phase with ambitious and bold goals, as it is supported by three prominent Emirati energy and investment companies, which are ADNOC, Mubadala and Taqa.

With the UAE taking over the responsibility of hosting COP28, Masdar, with its new structure, will contribute to accelerating the pace of development, supporting the UAE’s commitment to becoming one of the largest developer, owner and operator of renewable energy and green hydrogen in the world and supporting countries around the world to achieve their plans for climate neutrality.

The new “Masdar” targets a portfolio of projects with a total production capacity of more than 100 gigawatts by 2030, with aspirations to double that in the following years, while “Masdar Green Hydrogen” aims to produce one million tons of green hydrogen by 2030, as the company is working on developing advanced programs that support Building a green hydrogen economy that will be an important pillar of the energy transition and a future energy source that supports global decarbonization efforts.

• Masdar projects contribute to reducing the emission of more than 30 million tons of carbon dioxide annually.

• «Masdar» is active in more than 40 countries with investments exceeding 30 billion dollars.

• “(Today for tomorrow)…a national initiative to enhance commitment to sustainability and protect our environments, resources and society.”

• «Our history and our approach to preserving the environment and the sustainability of its resources is consistent».

• “I call on our society to adopt new ideas and qualitative initiatives that embody the civilized face of our country.”