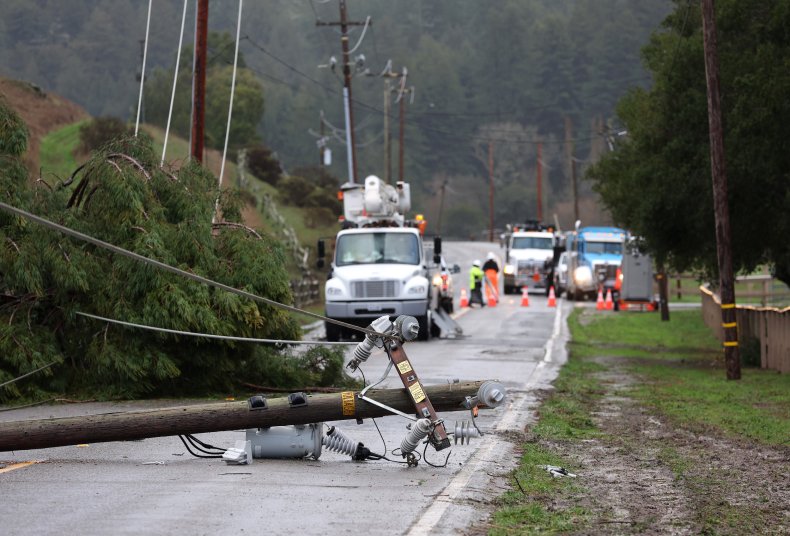 California is moving toward a ban on new fossil fuel cars by 2035, a key part of Governor Gavin Newsom’s climate change agenda. While there are major societal hurdles for his administration to overcome before that date, one perhaps unexpected obstacle is climate change itself.

The state has been pummeled by a series of extreme weather events since New Year’s Eve: strong winds and heavy rainfall, cyclones have led to severe flooding, rockslides and at least 20 deaths. Tens of thousands of people have been ordered to evacuate and many more homes across the state have experienced power outages due to downed power lines.

As extreme weather events are predicted to become more commonplace as global temperatures rise, their impact on energy infrastructure will also be felt across the U.S., including the infrastructure expected to power Newsom’s green transition.

“Federal and state authorities will need to work together to drive increased funding for grid resilience and development in the face of climate change and the electric transportation revolution,” Devin Gladden, manager for federal affairs at the American Automobile Association (AAA), said. News week.

The recent floods aren’t the first time California’s power grid has been hit by extreme weather. In August 2022, the state’s grid operator warned residents that they may need to conserve electricity, including avoiding electric vehicle charging, due to a heat wave in the middle of a drought.

The warning came a week after Newsom announced his electric vehicle (EV) ban, drawing criticism of the move. He said in a speech that the drought had reduced the state’s hydropower capacity and power outages were reportedly mitigated only by temporarily ramping up gas-fired power plants.

“The reality is we live in an era of extremes,” Newsom said during the heat wave. “Extreme heat, extreme drought and with the flooding we are experiencing around the world – just ask people in Missouri, Kentucky or Pakistan – the extreme flooding is a result of the wrath of Mother Nature.”

Newsom identified a common misnomer, that global warming means that the weather is generally getting warmer. On the contrary, the more heat energy in the weather system prompted by climate change makes its movements more erratic and therefore the weather it brings tends to be more extreme.

“Every summer and every winter it will be more variable and we get more weather records broken every time,” said Mark Maslin, a professor of Earth system science at University College London, UK, and an author on climate change. News week.

“What we’re seeing is that extra energy and heat in the system is making the bends in the Jetstream more extreme. So the incredible cold snap the US had recently is because that bend in the Gulf Stream has moved really far south,” he added . “Last year they had snow in Texas and the infrastructure was literally breaking down because they’re not used to that cold weather in Texas. It’s also the cause of our 40 degree superheat wave [Celsius in the U.K. last summer]when the warm bend in the Jetstream pushed very far north.”

What’s unusual about the weather isn’t necessarily that it occurs, but how far north or south it occurs, Maslin explains, caused by a “strong, oscillating boundary between the warm and cold air, which brings hot air to places that it usually doesn’t come, and cold air to places where it doesn’t usually come as south.”

California remains in drought despite the recent deluge, as the long, dry spells of 2022 have made the soil less permeable and able to absorb so much precipitation in such a short time; wildfires caused by extreme heat have also had a destabilizing effect.

While this has exacerbated California’s flooding and questioned the state’s ability to hold floodwaters for the summer, it shows how the two weather extremes don’t cancel each other out, but rather amplify each other’s effects.

Newsom’s gas car ban was created “without the proper infrastructure for electric cars,” Reshef said, adding that “grid stress will be major barriers” to the transition.

Gladden noted the “uneven patchwork of grid development approaches” among U.S. electric utilities, adding: “Given the urgency of climate change, profits and service areas can no longer determine where clean energy is available in this country. For this reason, profits can and service areas no longer dictate where clean energy is available in this country, federal and state electricity regulators must work hand-in-hand to demonstrate a higher purpose in the name of energy independence and climate change to build the energy infrastructure that will support our future required. If not, our nation’s energy future will become more dim by the day.”

The question of how EVs fare in these extreme weather conditions has also been raised during the evacuation orders; for example, following a story about a power outage during one of the storms, a News week reader wrote, “I hope the governor’s Tesla is indicted.”

Is this a concern for EV drivers in California?

“If the grid goes down, you can’t get gas either,” Marc Geller, spokesman for the Electric Vehicle Association, based in California, told me. News week. “Gas stations need electricity; if there’s no electricity, they don’t supply gasoline. So the same problem worries those who hadn’t filled up with gasoline [tank].”

When Geller owned a gas car more than 20 years ago, he said he, like others, would drain it to a quarter of a tank or less before filling it back up. “But in fact, most people with electric cars do or can certainly plug their car in when they get home – and the car stays there and charges. And most people leave every day with a full battery, because it was charged overnight.”

“So sure, [there may be] the odd case where someone hasn’t charged their car and no electricity is available — these things can happen,” he added. “But is that likely to happen to someone with a gas car?”

It is also true that while green infrastructure has been affected by extreme weather events, so have fossil fuels. An increase in gas prices in early 2023 was caused by refineries having to temporarily close due to the December cold snap, the AAA said.

Gladden suggested that swapping batteries or generator-powered chargers be part of emergency response planning, but added that “the interconnection between fossil fuels and clean energy cannot be underestimated in times of need: to repair the transmission lines that electricity from a renewable source, you might need a diesel car to get the repair crew to the pipes.”

Ricciardo: The Australian GP buzz will tell me a lot about...

Startups, here’s how to make hardware without ruining the planet