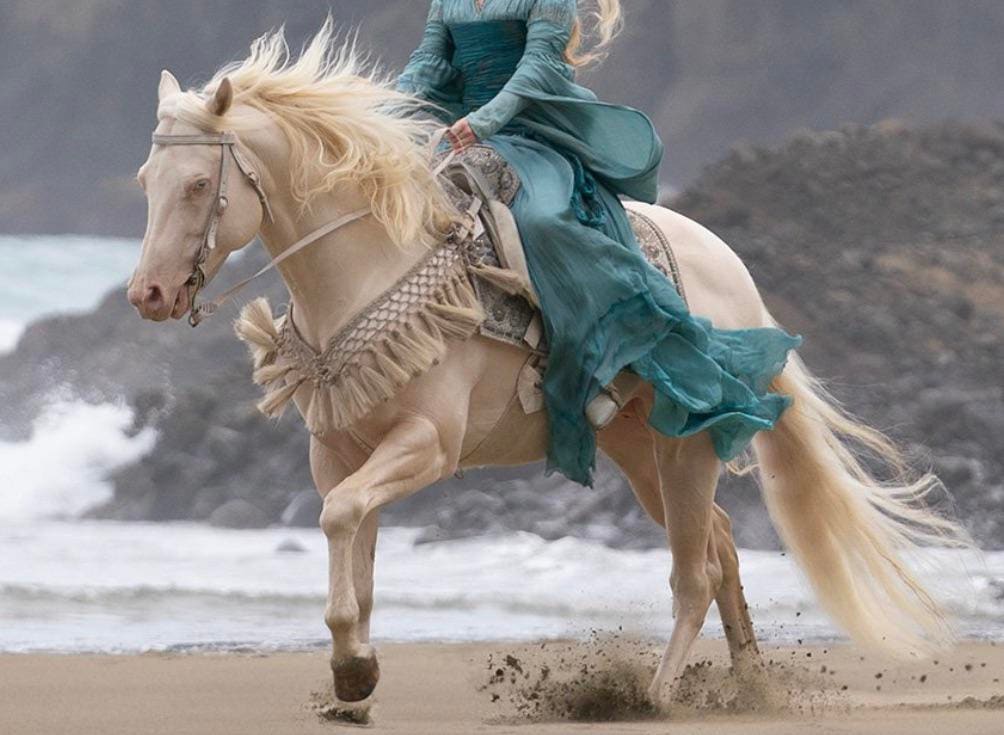 In the third episode of Amazon’s Lord of the Rings: the rings of power, Galadriel finally smiles.

It’s a radically expressive change for a character who, unfortunately, has virtually no emotional reach. Galadriel wears – almost exclusively – different shades of frown; maybe the occasional grin or bewilderment – but most of the time she frowns and stares at people, either in gritty determination or impatience and frustration.

I think a lot of the criticism of this version of Galadriel missed the mark. She is not ‘Mary Sue’ as some claim. For example, she is far too unsympathetic to be a Mary Sue. And her character is far too old and experienced to qualify. Mary Sues, by definition, are characters who are good at everything, despite not having the training or experience necessary for such mastery.

If you’re not clear on what a Mary Sue is, I’ll discuss the concept in the video below:

I also don’t care that she is portrayed as a warrior and has skill with a sword. Of course we don’t see that Under the spell of the Ring, but by then she will be nearly 10,000 years old. She has fought against Morgoth and Sauron. It goes without saying that she has gained some skills with a knife and probably a lot of other weapons. She is a level 200 High Elf. She is organized down to the last detail.

Unfortunately, in Power rings it seems that Galadriel hasn’t picked up human skills, despite being several thousand years old at this point. She shows up in Númenor – rescued by Elendil and brought safely to the island – with the hairs on the back of the neck raised, combative for no apparent reason.

She is an elder of an immortal race, born in Valinor, one of the few remaining beings to have lived through the First Age and seen the Two Trees. And yet she acts like a petulant teenager — so much so that Elendil tells her she reminds him of his kids. I’m not sure how old Elendil is supposed to be – his people live hundreds of years – but he’s not nearly as old or wise as Galadriel. And yet here he is, cackling at her like a loving father.

After three episodes, I also sadly have to admit that I think the casting choice here was a mistake. I like most of the cast at the moment, but Galadriel is a weak link, and while I’m sure Morfydd Clark is a great actor, she just doesn’t convince as Galadriel. Sure, a lot of this is the writing, and maybe if her character were better written I wouldn’t notice as much, but she doesn’t strike me as a believable Galadriel at all – even a younger, bolder version.

With Galadriel set up as the main protagonist of the show and five seasons planned, I admit I’m starting to worry. There’s a lot to love Rings of Power and the third episode had enough that I liked, but I’m really concerned that Galadriel will sink the ship if major changes are not made to her character – and it might just be too late for that. What a shame. Again, a hugely expensive, beautifully shot TV show slips away, because despite all that money, the writing quality just isn’t there.

I still enjoy The rings of power, and the massive campaign against it is foolish and largely fabricated by people who made a decision long before it ever came out. Lamenting that it is somehow overly awake or agenda-driven is clearly contrived and utterly nonsensical. But that doesn’t mean there aren’t legitimate issues with the show and Galadriel is unfortunately one of them. Hopefully that changes.

PS No, I’m not suggesting that Galadriel smiles anymore. I only brought up her moment of smiling because the slow-motion scene was so shocking. Galadriel always has a very gritty face on this show, and then suddenly we have this painfully long shot from her grinning ear to pointy ear. I think the problem lies more in how they wrote her so quirky and brash that she lacks other basic social skills like diplomacy, patience and so on which could make her feel like a more rounded and convincing character. Then suddenly, in slow-mo, they give us this:

Most of the reactions I’ve seen on this piece have been positive and, anecdotally at least, the general reaction of fans to Galadriel online seems to be in line with mine.

I think the coming weeks will determine a lot about fans’ opinions of the character, but right now she’s definitely falling into the Strong Female Protagonist trap that has doomed many other modern characters.

I wrote about this with She-Hulk, although I think they took a different approach to writing that character. In the Disney+ show, She-Hulk (aka Jennifer Walters) is actually quite charming and fun. She is a very likeable protagonist and her cast aside fourth wall is fun and entertaining.

The problem the show is running into is that it feels the need for the men around She-Hulk to constantly caricature sexist and misogynistic men. Sure, there are a lot of sexists, but by knocking us over with the fact, the audience starts to feel like they’re being preached to, which isn’t the best feeling if you’re hoping to enjoy a story.

Ultimately, this diminishes She-Hulk’s character, making her seem strong only because the men around her are so awful. (A woman is even referred to as “it” at one point, which is a lot cruder than even the very sexist phrases I’ve heard from other men).

This is very similar to making the hero smart by making all the other characters around them very stupid. Instead of making viewers think, “Oh, this character is so smart!” we think instead, “Oh, the writers must think” goods stupid too!”

But the way Galadriel is treated is not the same, even if the writers fall into a similar trap. The men around Galadriel are not made to look bad, so she can look good. Indeed, characters like Halbrand and Elendil come out pretty well in comparison. Both seem reasonable and cold-blooded by comparison. Even the overly cautious Gil-Galad and Elrond at least seem patient and calm compared to the overly emotional and constantly angry Galadriel.

Here Galadriel is presented as a strong female protagonist, her strength only equal to her spiky rage. The writers seem to think that the more she sticks out and the harder she behaves, the stronger she will appear, even going so far as to have her knife drawn on Elendil.

Unfortunately, this just gives Galadriel the same traits as poisonous men, and not the kind of tough guys we actually like to see like Aragorn, but rather the boastful, impatient, and often abusive men we put in the antagonist category.

Positioning Galadriel as a stubborn, younger, more warrior-like elf could have worked just fine had she also been given some of her more admirable qualities, such as wisdom and grace and the innate power that makes simply being in her presence an otherworldly experience. She shouldn’t remind Elendil of his children; she should give him as much awe as it does fear, just to be around a creature that is so much further than anyone he’s ever encountered. Of course you don’t have to turn the knob that high, but fairies are supposed to be exotic. At this point, only Arondir comes across as non-human. He is the only elf on this show with an ethereal presence. Galadriel’s strength must come from her wisdom and command, not just from her ability to demand and act tough, bark all the way and not bite.

Even the troll scene could have been handled better, displaying her leadership skills rather than showing off some wacky acrobatics out of place in Tolkien’s work (and more in line with the worst excesses of the hobbit trilogy).

What do you think of Galadriel and? Power rings? Am I exaggerating here? Let me know on Twitter or Facebook.

The Bharat Express News - October 3, 2022 0
CHICAGO - The Cleveland Guardians were probably the biggest surprise in Major League Baseball this season, with the youngest roster in the major leagues...