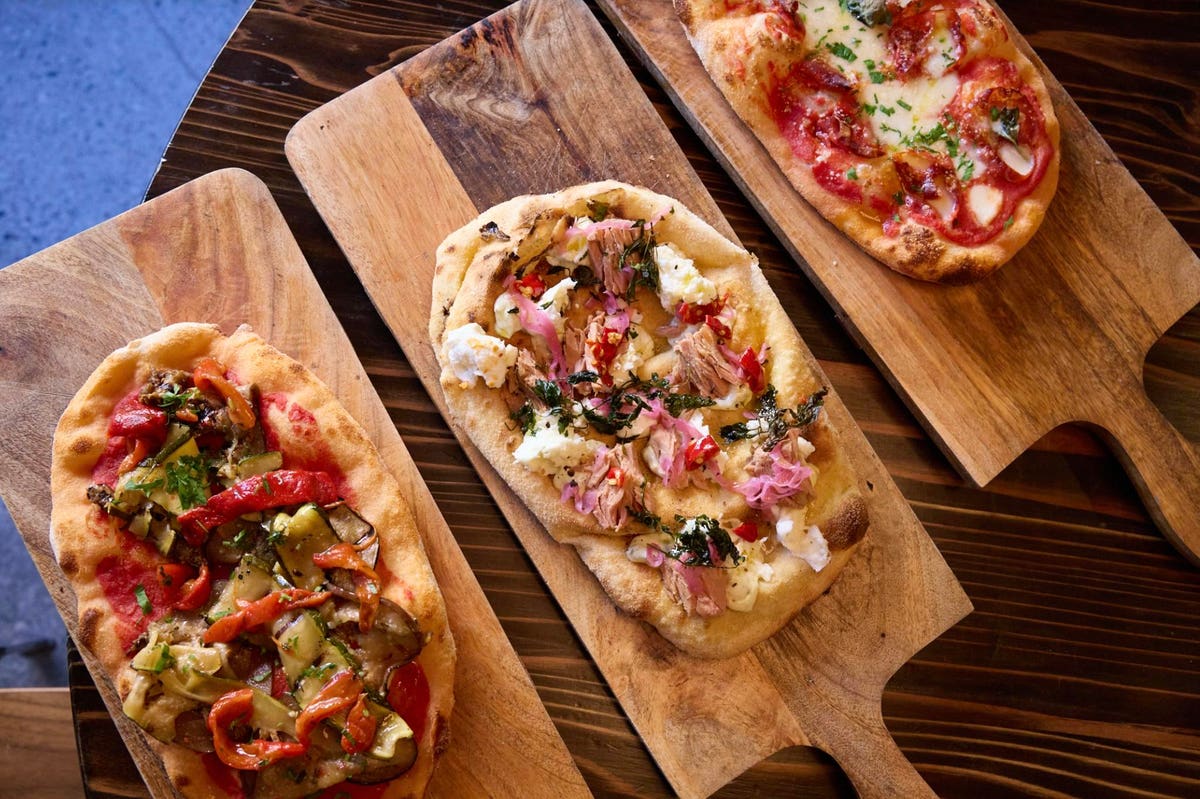 Pinsas are similar to pizzas and made from soy, rice and wheat flour. Crispy on the outside, yet soft and light on the inside. The menu includes pinsas such as The Garbatella with Caper Mayonnaise, Mediterranean Tuna, Buffalo Mozzarella, Hot Chili, Pickled Red Onion, and Parsley; MONTESACRO the namesake Montesacro with rosemary mashed potatoes, artichokes, house lamb sausage, buffalo mozzarella and chilli oil; and the vegan San Lorenzo with Tomato, Extra Virgin Olive Oil Cured Paprika, Zucchini and Eggplant.

We chatted with founder and owner Gianluca Legrottaglie about the menu inspiration, the team’s Roman heritage and more. This is what he had to say.

Montesacro is the very first pinseria in the United States. What exactly is a pinseria and why did you open it 8 years ago?

I discovered pinsa on a trip back to my hometown in Rome eight years ago. The crunchiness and overall texture of this product blew me away. By the time I returned to SF I decided to import the pinsa flour from Rome to the US and start a pinseria. When we signed the lease for the first Montesacro, I envisioned a casual, rustic place where people gather, enjoying a pinsa with seasonal toppings, which is gentle on the stomach but a delicious experience for your taste buds.

Talk about your menu and the highlights. What is the inspiration for the menu?

The endless inspirations from traditional Roman cuisine are the heart and soul of our cuisine. We like to source local ingredients from the Bay Area purveyors and combine them with some Italian staples. We pride ourselves on making simple, authentic food. Take our Grottaferrata pinsa, with tomato, local wild mushrooms and hot Calabrian chili. Very few ingredients, incredibly tasty.

In the newest locations opened, Montesacro Marina and Montesacro Walnut Creek, we offer an extensive menu, with some classic Roman dishes, such as Amatriciana, Carbonara, Cacio & Pepe and Abbacchio (cast iron lamp chops.)

Brunch is the newest menu offering at the Marina location – tell us what’s special about this menu.

We like to say that we offer brunch with an “Italian twist”. Our Savory Croissant with avocado and fried eggs is becoming increasingly popular, along with a cocktail menu designed by our bar manager Jacopo Rosito. Jacopo has revisited some classics with a sexy twist, not to be missed is his take on Espresso martini and Shakerato.

How does Montesacro honor the team’s Roman heritage?

The real intention in creating Montesacro was to take our customers on a trip to Rome, without plane tickets. People dining at Montesacro are encouraged by our staff to share their food. We make these dished and share their stories. For his incredible Supplì al Telefono (tomato rice croquettes), our Rome-born and raised chef Mattia Marcelli religiously uses his nunna’s recipe.

What’s in store for the holidays and the future for this location?

In mid-November we opened our newest addition to the group, Montesacro Walnut Creek. Right now, we are committed to bringing consistency and a great dining experience to our neighbors, family and friends.

How the definition of good health varies from country to country

Yes, Mondays Are That Bad: 3 Ways To Make Them Better