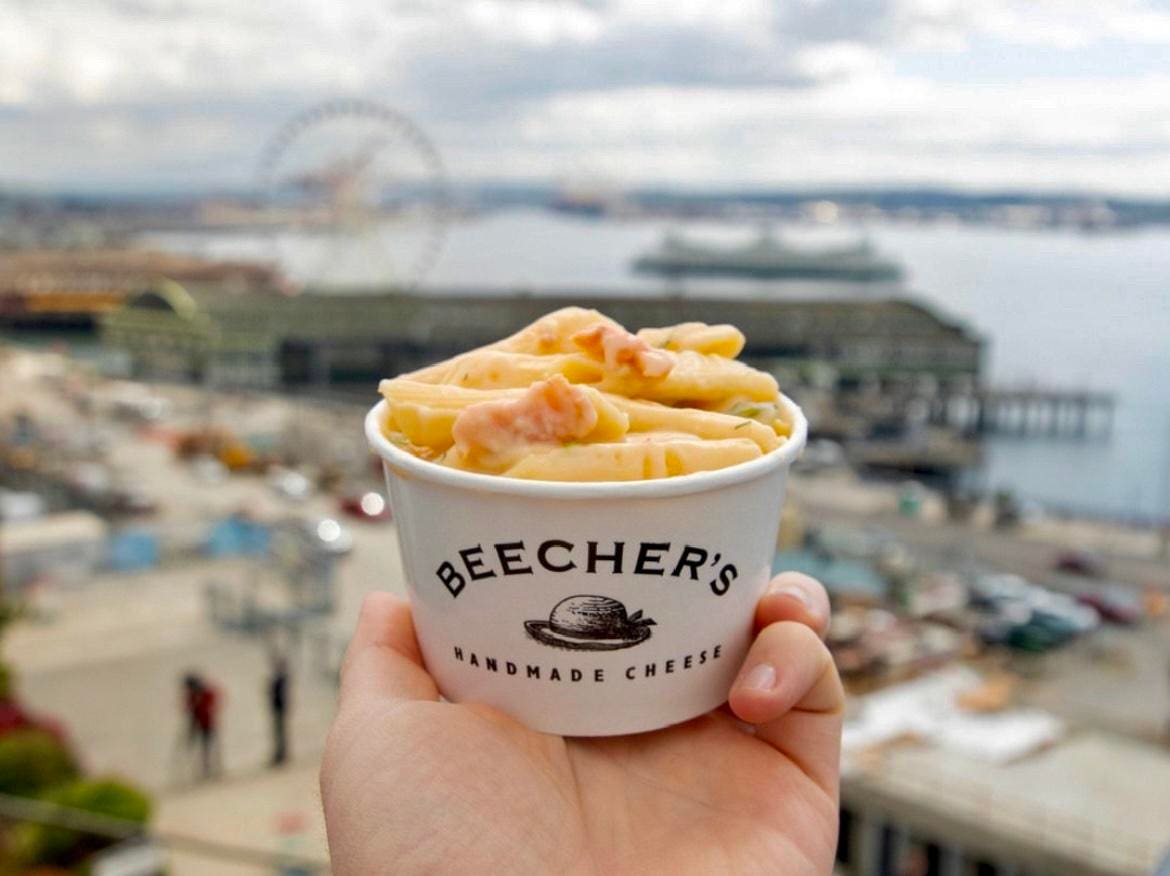 It all starts with the cheese

Kurt Beecher Dammeier’s lofty goal with the November 2003 launch of Beecher’s was to convince consumers that eating handmade cheese should not be reserved for special occasions. “We wanted to take artisanal cheese and make it an everyday cheese,” he explained in a recent phone interview.

The mission began when Dammeier rented a prime spot at Seattle’s Pike Place Market. “We did it a bit backwards,” he said. “We had the space and then we tried to learn how to make cheese. It was more challenging than expected, so we hired a cheese maker and then tried to find a local source for milk. That was much harder than we thought it would be.”

Finally, the hard work has paid off, with fans often queuing for the now-famous grilled cheese and mac-and-cheese served at its Seattle spot, as well as its location in Manhattan’s Flatiron neighborhood.

Those gooey creations became the irresistible introduction to Flagship cheese, a cheddar with Gruyere undertones. Made in the Swiss tradition, it has a sweet, slightly nutty flavor with a creamy finish. It was a surprising new product when it debuted and now it has quite a few wannabe products for a similar profile.

Although the flagship is aged for a minimum of 14 months, it is often aged for longer, helping to develop the complex flavor, a complexity shown in the mac-and-cheese.

How about that mac now?

Dammeier’s entrepreneurial fervor was fueled by the success of Beecher’s, which showcases the cheese-making process for the hordes of tourists who frequent Pike Place Market. Soon the parent company – known as Sugar Mountain – expanded to include the popular Pasta & Co. “This iconic spot had a four cheese mac-and-cheese in the frozen section. We adopted that recipe,” he said.

Something like over 20 versions later and the culinary team had a winner, one that has won awards and adoration from discerning foodies.

The subtle seasonings make the dish crave in the category, and Dammeier generously thanks his neighbors at Pike Place Market for ongoing inspiration. “There are few places like Market Spice. It really hasn’t changed since it opened.”

And those key spices that make up the flavor profile of Beecher’s Mac-and-cheese?

“We use a little chipotle power, some granulated garlic and a little bit of salt,” he said. “It’s such a small amount, but it really adds to the umami.”

Mission accomplished! With the success of that product — which is available in the frozen section of more than 12,000 supermarkets nationwide, as well as online — the mac-and-cheese portfolio has expanded over time.

There is now a gluten-free version, as well as a variation made with smoked Flagship and a preparation with peppers. Roasted potatoes, street corn, and mushroom rice have also gotten the mac-and-cheese treatment.

Dammeier is happiest when he has a full plate and an ambitious agenda. Expansions and acquisitions include the opening of a Beecher’s in New York City’s Flatiron neighborhood, a move that led to the development of Dutch Hollow Dulcet, an ultra-rich cheese made with Jersey cow’s milk at Dutch Hollow Farm in the Hudson Valley.

The creation of The Butcher’s Table was connected to the company that acquired Mishima Reserve, which sources sustainable American Wagyu beef from a cooperative of farmers across the country.

When it comes to supermarket-friendly frozen foods, consumers can expect more options in the coming year: different types of lasagna with red sauce, meatballs made with grass-fed beef and mac-and-cheese appetizers.

Zenith Supports Susan G. Komen in the Race for Healing