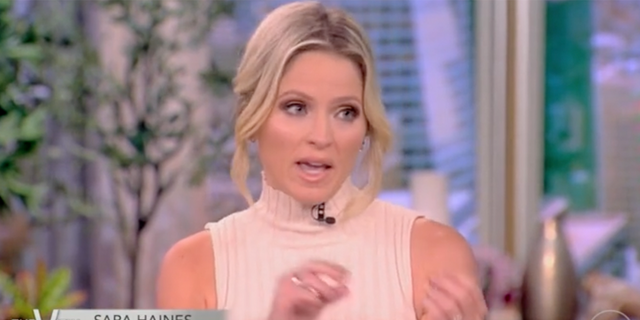 Sara Haines, co-host of The View, claimed there is “no such thing as people having late-term abortions” on Wednesday’s episode of the daytime talk show.

Haines would go on to explain that the GOP’s claim that the Democratic Party supports late-stage abortions is a “myth” designed to achieve a political outcome. She eventually admitted that 1.3% of abortions are late abortions, but used that statistic to double her original point.

Haines also argued that late-term abortions are only done for “heartbreaking medical reasons.”

On Wednesday, “The View” co-host Sarah Haines claimed late abortions are a “myth” used to advance the political agenda for life.

The co-host’s statements emerged during a segment on comments by Senator Lindsey Graham, RS.C., about a potential Republican bill to introduce a federal limit on abortion after 15 weeks of pregnancy. Of course, the ladies of “The View” strongly disagreed with Graham’s proposed legislation, something he claimed would go to vote if his party won a majority in Congress in November.

Though a few of the co-hosts sarcastically thanked the senator for encouraging Democratic voters to show up to prevent pro-life Republicans from infringing on their right to vote.

Haines took aim at Graham’s bill, starting with criticism that it left room for red states and their tighter abortion restrictions, while causing more pro-choice states to ban it in the past 15 weeks.

“The way he’s written this will allow the states that have stricter regulations — those six-week bans — to say, ‘Ah, that’s fine.’ But if you’re more liberal than that, he’ll say, ‘No, you have to come back.’ So he also chose the way it applies,” Haines argued.

On Wednesday, the ladies of “The View” Sen. Lindsey Graham, RS.C., in for his proposed federal abortion restriction.
((TBEN Photo/Alex Brandon, File))

The co-host then claimed that Graham justified his pro-life bill through a political “myth.” She said: “He calls it a late-term abortion, um, late-term abortion — BTW, 15 weeks for anyone who doesn’t know is a week into your second trimester. And just to get rid of an oft-cited myth that is used to get a certain political outcome, there is no such thing as people having late abortions.”

“Say that again,” co-host Whoopi Goldberg told Haines, reiterating the point. Even more emphatically, Haines stated, “There is no such thing as people having late-term abortions.” The audience followed with applause.

“I’ve never seen a situation where someone decides that,” she continued, adding, “That’s a myth that is being shopped around to get a certain political outcome.”

Abortion protesters gather outside the Supreme Court in Washington, Friday, June 24, 2022. The Supreme Court has ended constitutional protections for abortion that had been in effect for nearly 50 years, a conservative majority decision to overturn the court’s groundbreaking abortion cases to undo .
((TBEN Photo/Jose Luis Magana))

Earlier this year, TBEN News Digital reported on NPR’s findings that “collectively, 3% of abortions occur after 18 weeks of gestation and beyond.” NPR, like Haines, wanted to categorize late abortions as a negligible part of the abortion debate.

Although, as one prominent Twitter account noted at the time, “But the reason they’re only showing % is because 10% of the 800,000 annual abortions are 80K! In context, there are only 12K gun homicides in the US every year. the first trimester can be considered a pretty significant amount for many people.”

Haines continued with her numbers, stating, “And 91 percent of all abortions are performed in the first trimester.” She then stated, “So until we’re all clear about the information and data, we shouldn’t play around with this because it’s false shoppers.”