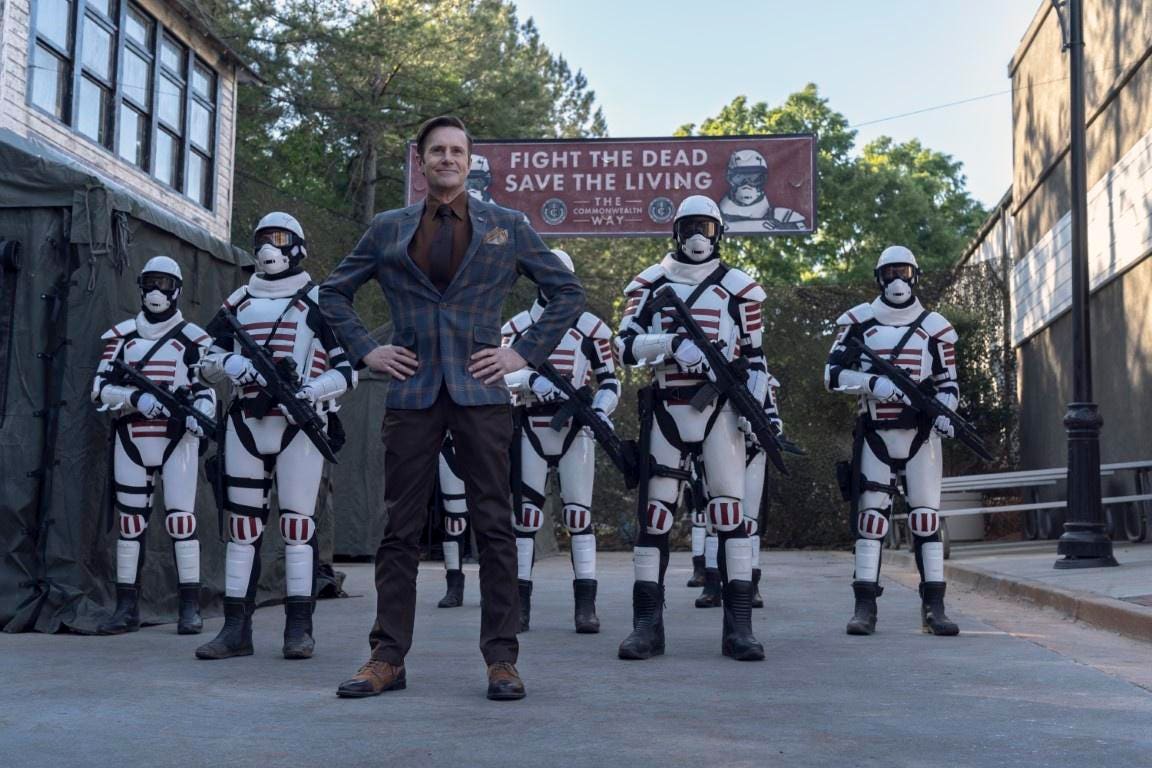 There is a scene in The Walking Dead last episode, ‘Out of the Ashes’, which really made me think of a different show.

Eugene and his compatriots were eventually allowed into the Commonwealth and undergo a brief orientation process where they watch the guy in the photo above, Lance Hornsby, talk about the wonders of this new utopia.

After orientation, the group splits up. Eugene walks with his new lover, Stephanie, who actually seems interested in him rather than a honeypot designed to attract strangers. They walk along the city’s clean, pristine streets eating ice cream cones. it makes me think of The right place, a comedy about several not-so-good people ending up in “The Good Place” – a paradise with a dark underbelly they haven’t yet discovered (I highly recommend the show, especially its first season).

It’s, I guess, not that different from the Commonwealth, which seems to be pretty perfect at first glance, but which we know has its own darkness lurking underneath. Yumiko reunites with his brother and while he insists it’s not too good to be true, he adds a qualifier: as long as you follow the rules.

Our heroes ruin everything, of course. Instead of taking their time to settle down and build trust, they immediately hatch a (very ill-conceived) plan to return by radio to Alexandria. The princess is trying to distract Mercer, which probably makes matters worse, and before you know it everyone except Yumiko (who has been treated separately and has a lovely conversation with her brother) is okay with it. arrest and risk exile.

Curiously, Hornsby intervenes and pleads for their release, Stéphanie by his side. She is accused as a citizen while the others are refugees, but at least it seems that she was actually helping them. Then again, this could all be part of a larger ruse on the part of the Commonwealth to lull our heroes into a false sense of security.

Stephanie only “helped” so they could all get arrested. Hornsby’s intervention is only part of the scam. Once he has their confidence, they turn the tide on their compatriots and the Commonwealth takes action, but what action and why remains to be seen.

This is just one of the four stories that make up Season 11, Episode 5 of The walking dead. The others concern:

Something is wrong with season 11

Something is wrong this season. A lot can happen in an episode and it can still feel oddly boring and slow. It’s like if you could pick just the right pieces from each episode, you could stitch them together into a few really great episodes.

Instead, we have a lot of filler and uneasy moments, like when Jerry recognizes one of Hilltop’s zombies and is like, “It’s Tony! As if we were supposed to know who Tony is, let alone care.

Maybe it wasn’t even Tony, maybe he said another random character’s name like it meant something. Please, writers of The walking dead, in order for us to deal with someone’s death, you first need to spend time figuring out who they are.

This also applies to all of Maggie’s poor and unhappy souls. Oh know, not Agatha, I loved Agatha, she was the best. I’m so sad she’s gone. Poor me.

When it comes to Judith’s teens, I like to imagine that at this point most kids and teens would be pretty hardcore, raised in a dangerous, deadly, traumatic world. They’d be a little screwed up, sure, but they’d be tough like Judith. Why is she so tough but those other kids who grew up in the same circumstances are playing “zombie bite dodge” and are clowns?

Also, I get Lost extra vibes in Alexandria where we constantly meet new people that we don’t recognize and don’t matter and that just serve to prove that if we don’t know so many characters in a zombie apocalypse show, it Maybe it’s time to cut the cast down a bit.

The whole thing is just a little boring when it comes to it. A little dull, a little uneven and incredibly slow for the final season of The walking dead.

Then I also have questions about the Commonwealth. Those ice cream cones that Eugene and Stephanie ate – “creature comforts” as he calls them. What kind of manufacturing and farming do these people have? It is not easy to produce all the components necessary for their manufacture. Sugar alone would be a pretty big business, not to mention dairy products and so on. Is this really where the Commonwealth is diverting its resources? Hmmm.

Am I wrong? Did I miss anything brilliant in this episode that someone else noticed? Let me know!