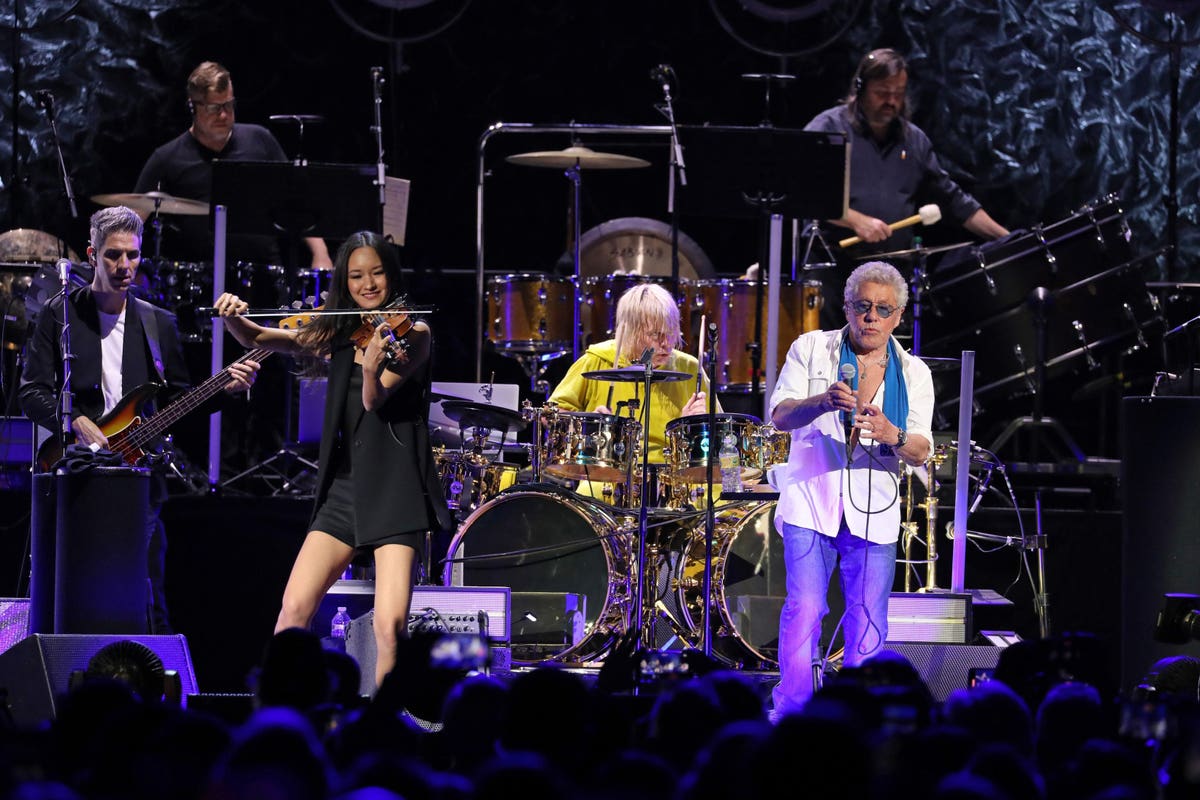 In the first half of 2022, as part of its “Hits Back” US tour, The Who played to 14 cities and then took the summer off. They will return to America on October 2 to conclude that tour with performances in 16 other cities, including Toronto, St. Louis, Las Vegas and Detroit. The tour ends on November 5.

For every ticket sold, $2 goes to Roger Daltrey’s Teen Cancer America charity, which we wrote about last month. (Also, a stop on the tour will be for a ‘backyard’ TCA fundraiser with The Who and some other famous bands, including John Fogerty, Green Day and Billy Idol, performing.)

I recently spoke with Daltrey about touring at age 78 and what fans could expect at The Who’s concert shows. Following are edited excerpts from a longer Zoom conversation.

Roger Daltrey: I love it, I love it, it’s that simple. i just did [solo] tour in England, for free, for the musicians who care passionately about our industry. They were treated pretty badly during the ? [COVID-19] lockdowns, and received very little help from either [British and American] governments. It’s the road crews that worried me the most. Those guys, they’re extraordinary people, incredibly skilled. Every day they arrive at 10am, spend all day setting up the stage, turning on the lights, all that. Once the band comes off the stage, they take everything down, load it into a truck, travel overnight to the next gig and do the same thing again. To find people like that again, to rebuild that company, would take years. I was worried if they would really be there when we went back? [to touring]. So me and my big mouth [laughs]I made a statement that the bands that can afford it, like us who have had privileged careers, should take care of their own careers, try to give them some money and work to help replace what they’ve had over the years. lost.

To collide: At the age of 78, touring and traveling has to take a toll on your body?

Daltrey: Yes, but it’s a good toll – it makes you fit, keeps you moving – instead of just sitting in a chair watching TV. My recent solo tour was an absolute joy. As I indicated, I took nine musicians with me to give them a month’s work. We had no expectations. and I was hoping the tour wouldn’t be cancelled. Some of us did get Covid, but we made it to the end anyway.

To collide: Your Who concerts seem to attract all ages. I saw that last spring during the show of The Who’s Madison Square Garden in New York.

Daltrey: I was lucky enough to belong to that generation of bands that believe that rock music can be much more than just a three minute single that appeals to teens. Here we are at this advanced age of 78, 79 – like Mick Jagger – where people take their grandchildren to shows, some of them eight years old. Eight to 80 [laughs]. To know that rock music has achieved that and that The Who was a part of it is what I’m most proud of.

To collide: What’s next for you, The Who, etc.?

Daltrey: The Who is approaching retirement age. I’d like to stop while we’re still doing it right. When I can’t sing the notes anymore, sing where it touches the audience, then it’s time. The Who’s music is very different from most rock. You are dealing with words from a deep inner space within all of us. She [the words] connect the singer with the audience. If I lose the strength to do that, well, I’ll stop, even if it’s after this tour. I don’t want the downward slope where you’re not as good as you used to be.

To collide: Was that possibly the case when you had a voice cancer a while ago?

Daltrey: Yes. I sang through so much crap. I should have stopped. I hated it, will never do it again. I thank my audience for sticking with me. Luckily it wasn’t cancer, but a condition. My throat doctor, Steven Zeitels in Boston, has given me a voice that is better than ever. I think I sing better than in all my life.

To collide: Have you seen “Top Gun: Maverick” yet? There’s a great placement of “Won’t Get Fooled Again” early in the movie.

Daltrey: No, I’ve been on the road so much [laughs]. I also need to see the new Elvis movie. I am a member of BAFTA [British Academy Of Film And Television Arts], so I’ll be reviewing both to see if they deserve awards. I’m watching in the comfort of my home after the next half of The Who tour. As for, “won’t be fooled anymore”, that’s the beauty of [Pete] Townshend’s writing. You can place any kind of action movie behind the pulsating music. Then there’s my scream in that song. I can only imagine where that is [placement] could be.

To collide: Where did that scream from Roger Daltrey come from?

Daltrey: Pete had indicated a scream in that part of the song and I thought, “This must be completely and utterly primal.” I’ve always been concerned with the primal shock connection with the audience that a voice can have. “Love Reign O’er Me,” has the same sort of thing with the last one, “love.”

To collide: You still throw the microphone in the air at concerts. Have you ever dropped it?

Daltrey: I can’t see anymore so yeah [laughs]. But I hardly ever do it anymore. I was so good with that damn thing. I suddenly realized that I am not in a circus.

To collide: Why did you even start it?

To collide: You say boredom. When they do that lengthy introduction to the rock opera “Tommy” with the big orchestra opening your current shows, you have nothing to do on stage. What do you think up there?

Daltrey: What the hell am I doing here [laughs]?

To collide: “The Real Me”, a podcast for your charity, Teen Cancer America, is also a song you sing from the “Quadrophenia” LP. Who is the real Roger Daltrey?

Daltrey: He is a very simple man, to be honest, complicated simple. I like to look respectable, not like a sack of laundry, although I usually do on my farm. I don’t want for much. I am very quiet. I’ve had to live in silence for so much of my life. Singers don’t talk much, especially when they’re doing three-hour shows. You come off the stage with not much more of a voice. Shut up until you’re back on stage [laughs].