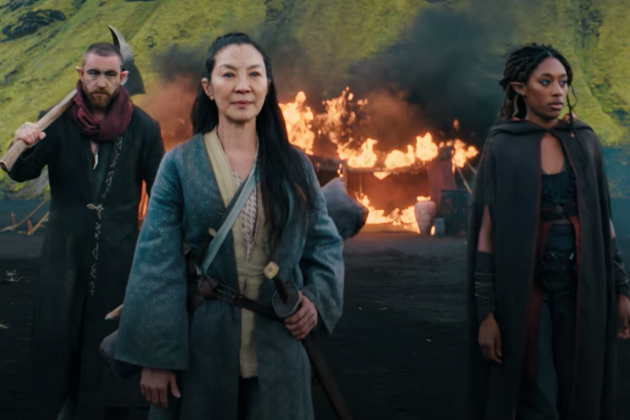 Henry Cavill may be leaving the Netflix franchise “Witcher,” but Michelle Yeoh is on deck to lead the four-part prequel series “The Witcher: Blood Origin.”

Netflix has released a new teaser for “Blood Origin,” which takes place 1,200 years before the events of “The Witcher.” The prequel series explores the creation of the first prototype Witcher and the events leading up to the Conjunction of the Spheres.

The first teaser trailer for “Blood Origin” was revealed after the end credits rolled out on the season finale of “The Witcher,” which premiered on Netflix in December 2021. The teaser introduced Yeoh as the deadly Scian, the last member of a nomadic tribe of swordsmen on a quest to recover a knife stolen from her people – along with Sophia Brown as Éile and Laurence O’Fuarain as Fjall. The cast includes Mirren Mack as Merwyn, Lenny Henry as Balor, Jacob Collins as Eredin, Lizzie Annis as Zacaré, Huw Novelli as Callan “Brother Death”, Francesca Mills as Meldof, Amy Murray as Fenrik, Nathaniel Curtis as Brian, Zach Wyatt as Sundril and Dylan Moran as Uthrok One-Nut.

Last month, Cavill made the shocking announcement that he would be stepping down from his lead role as Geralt in “The Witcher” after Season 3. Liam Hemsworth will take on the role in Season 4.

Sarah O’Gorman and Vickey Jodenon directed ‘Blood Origin’, while Declan de Barra was the executive producer and showrunner. Lauren Schmidt Hissrich, executive producer, and author Andrzej Sapkowski was a creative consultant for the series. Other executive producers include Jason Brown and Sean Daniel of Hivemind, Tomek Baginski and Jarek Sawko of Platige Films.

“The Witcher: Blood Origin” premieres on Netflix on December 25. Watch the trailer below.