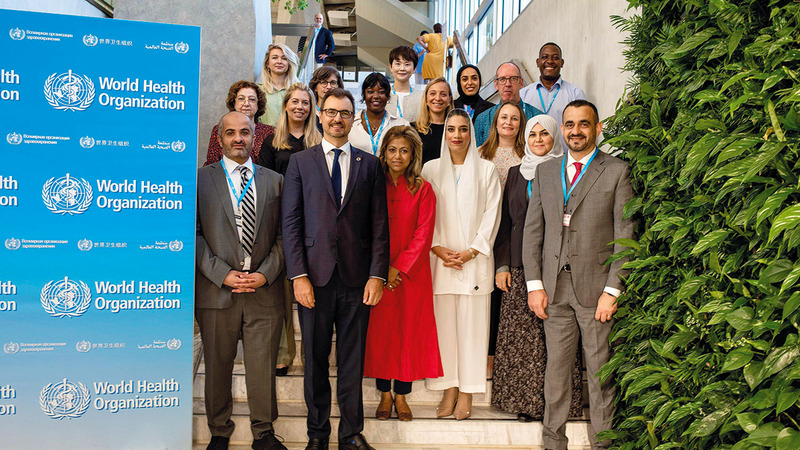 An official delegation from the UAE government held a series of workshops on the methodology of government accelerators at the headquarters of the World Health Organization in Geneva, within the framework of activating the strategic partnership launched by the two sides last December, as part of an official visit that witnessed a series of bilateral meetings with representatives of a number of international, European and academic institutions It aimed to strengthen global partnerships and international cooperation in vital and future fields.

The UAE government delegation discussed strengthening cooperation and partnerships with a number of international institutions in Geneva, where bilateral meetings were held with representatives of the European Organization for Nuclear Research (CERN), the World Economic Forum team, the IMD School of Business and Leadership management, and the United Nations Conference on Trade and Development team. UNCTAD”, the International Institute for Sustainable Development team and the Geneva 2030 Initiative team, and the meetings aimed to exchange visions and ideas and discuss expanding areas of partnership with the UAE government, and ways to activate and intensify international efforts to accelerate the achievement of development goals and advance various vital sectors.

The UAE government held a series of interactive workshops within the framework of the strategic partnership with the World Health Organization aimed at strengthening the health sector, health care and quality of life, and expanding the range of health services provided in various countries of the world. The three-day workshops aimed at introducing the WHO team to the 100 Challenge methodology and designing projects and initiatives to ensure the adoption and application of the government accelerators model to accelerate the achievement of health care goals, and launch the first batch of global accelerators.

The Director of the Government Accelerators Center in the Prime Minister’s Office at the Ministry of Cabinet Affairs, Dr. Radhia Al Hashemi, said that the interactive workshops seek to raise the competencies and capacity-building of WHO employees by sharing the model of government accelerators and the methodology of the 100-day challenge in the UAE government, in order to ensure Finding solutions to the most important health challenges faced by societies around the world.

She added that the UAE government was able to enhance its global model in capacity-building, setting challenges and identifying the most important opportunities that contribute to modernizing the global government work system, developing competencies and enhancing the use of data to make a positive global impact.

The interactive workshops organized by the UAE government to train WHO employees focused on introducing the first government accelerators of their kind in the world, and training them on the 100-day challenge methodology by designing projects and initiatives and simulating the most important stages that the methodology follows to complete them within 100 minutes.

The workshop work program also focused on the challenges facing the organization, to implement the 100-day program of initiatives, so that it is applied quickly and smoothly, and with a high degree of efficiency and effectiveness.

By sharing the government accelerators business model, the UAE government seeks to enable the World Health Organization to adopt the achievement of the organization’s strategies and make it a top priority and implement them on a larger scale.

The methodology of the 100-day challenge in the government accelerators model launched by the UAE government includes three main stages. Launching and mid-term review workshops to achieve the goals, while the third phase focuses on achieving sustainability and expanding the scope of results achieved within 100 days.