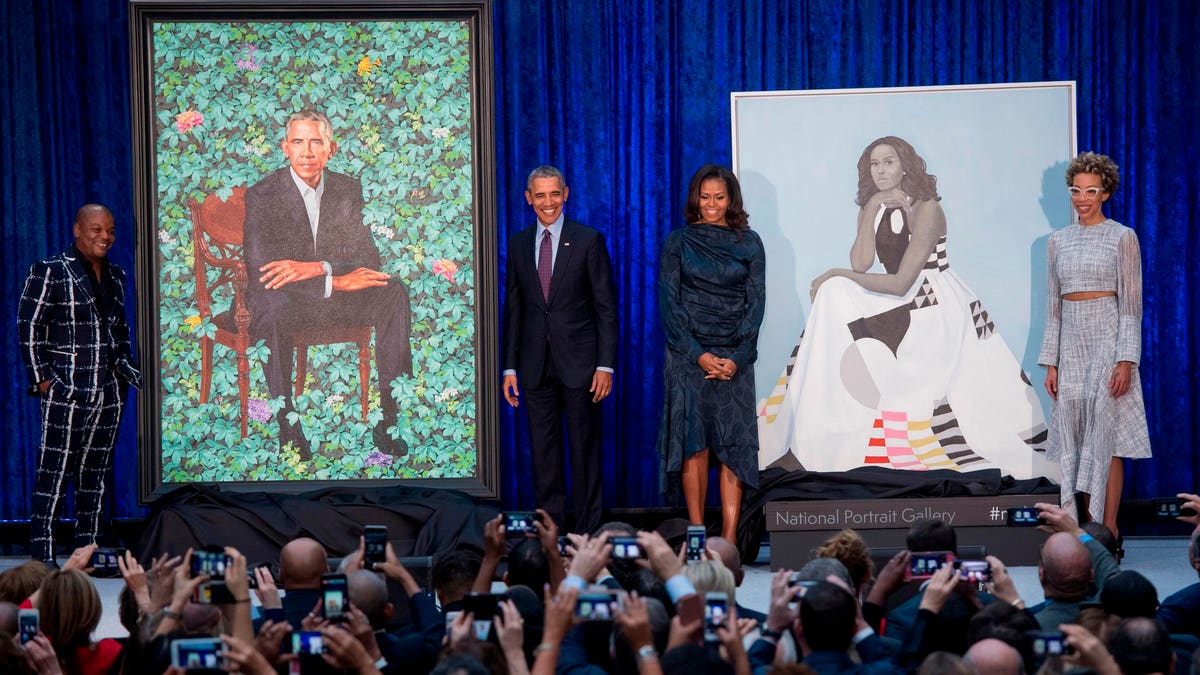 The Portraits of Obama tops the Art Institute of Chicago’s summer exhibition program. Chicago is the first stop on a nationwide tour for the instantly iconic paintings by Amy Sherald and Kehinde Wiley which are typically housed at the National Portrait Gallery in Washington, DC.

Visitors who take the time to explore the rest of the museum will be rewarded with the nation’s premier collection of “hey, I’ve seen this before” paintings, images familiar even to non-art-loving audiences. Bisa Butler’s stunning portrait quilts remain on display. They revolutionized what is now expected of art museums.

The song “I’ve Been Everywhere” tells the story of a man traveling far and wide through the countryside from big towns to small towns with little more than clothes on his back. It could have been written about Joseph Yoakum (1891-1972).

Did Yoakum actually visit all the places he painted and titled his dreamy, flattened landscapes, of which around 100 are on view until October 18?e during the exhibition “Joseph E. Yoakum: What did I see?

“I think it’s very likely that he visited many places that he claimed to have visited, but even if he didn’t, suspending my disbelief leads me to conclude that his focus on specific land masses and bodies of water was a portrait of her spiritual self – her surrogate visual self-portrait, ”Mark Pascale, Janet and Craig Duchossois, Curator of Prints and Drawings at the Art Institute of Chicago. “He claimed to have visited the places based on memories of his youth, so, as an older man, isolated in a city far removed from all his subjects (Chicago), he is expanding his immediate surroundings. C it is very beautiful for me to imagine this as part of his reflection.

No matter how many of these places Yoakum has laid eyes on, it has been surprisingly well traveled. Born during Jim Crow in Missouri, Yoakum left home as a boy to work for circuses. He worked on Buffalo Bill’s Wild West Show in 1902. He served in France during World War I. He traveled the rails around the American West. He lived in Iowa and Florida and intermittently in Chicago before settling there permanently.

In 1962, at the age of 71, when Yoakum said he had a dream that inspired him to draw, he was everywhere. The day after this dream, he began a daily artistic practice that produced some 2,000 works over the next 10 years.

“Recognizing that Yoakum’s designs were consistent throughout the known body of his work and the great success of his compositions, touch and invention is what sets him apart from the masses of so-called ‘self-taught’ artists,” explains Pascale. “He was an artist, pure and simple.”

Other Chicago artists recognized Yoakum’s accomplishments, leading them to collect and support his work, bringing him to wider attention than he could have done himself as a black outsider in the world. of art in the late 1960s and 1970s.

As fate willed it, Chicago turned out to be the perfect place for Yoakum to be recognized and appreciated.

“In Chicago, there has long been an interest in the art of world cultures, not as ‘primitive’ art, but as objects produced by artists and artisans who made it from a spiritual and cultural mandate, ”said Pascale. “This idea was taught in art history classes at the School of the Art Institute of Chicago, first by Kathleen Blackshear, then by her student Whitney Halstead. They took SAIC students to the Art Institute, Field Museum, Oriental Institute, and other places such as Maxwell Street Market, and in doing so, prepared them to open up to things that did not follow any strict Western Anglo-aesthetic model.

Pascale also notes that Chicago collectors had a well-developed interest in surrealism, a genre to which Yoakum’s work tends to lend itself if it is to be categorized.

“Jean Dubuffet gave his famous ‘Anti-Cultural Positions’ lecture at the Arts Club in 1951 (in Chicago),” said Pascale. “In it, he pleaded for the celebration and elevation of non-Western art as art. All of these things combined so that open-eyed Chicagoans had a propensity for work that was intensely personal that was aesthetically compelling, but lacked the elements of art school training – drawing of life, perspective, etc.

This atmosphere allowed Yoakum to have his first trade show in 1968, in Chicago, and at least three of the artists who lent to the current show saw and purchased his designs.

Yoakum saw the world and painted it; Chicago brought these paintings back to the world.

Contemporary traveler of the world, Mimi Cherono Ng’Ok (born 1983, Kenya) uses a camera – a film camera – to share her visions of the tropical climates of the Global South, mainly focused on the vegetation of the region.

Her first solo exhibition in a museum in the United States, “Mimi Cherono Ng’ok: Closer to Earth, Closer to My Own Body,” features photographs and a film made across Africa, the Caribbean and the United States. South America, all as part of an investigation of the rich and diverse botanical cultures of the tropics.

“Because Mimi does most of her work on her travels around the world, sometimes several months go by before she develops the film and can see the results,” said Antawan Byrd, associate curator of photography and media at the Art Institute of Chicago. TBEN.com. “This distance, a kind of delayed gratification, is part of her process – it allows her to see the images again and thus discover details and associations that might not emerge through instant engagement with the images in digital format. “

Ng’Ok’s work is rooted in a long tradition of plant photography, albeit from a radically different angle.

“Some of the earliest known photographs, such as the ‘photogenic drawings’ made by William Henry Fox Talbot in the late 1830s, depict plant forms,” Byrd explains. “Throughout the 20th century, artists ranging from Imogen Cunningham and László Moholy-Nagy to Robert Mapplethorpe have all used photography to visually analyze botanical specimens. Mimi is aware of these precedents and would say that her approach stands out for the peculiarity of her life experiences growing up in Nairobi where she developed a respect for the botanical diversity of the tropics.

The photographs of “Closer to Earth, Closer to My Own Body” lack frames, titles or any indication of location. By this, the artist intends to offer the viewer an immediate, intimate and vulnerable experience.

“Mimi is really interested in the public having unfiltered engagement with her work; she likes to leave it open so viewers are encouraged to tap into their own associations and stories as they experience the work, ”Byrd said.

To help visitors dig in, while the artist explores the formality of plants, consider what she might try to say about their broader connections to domestic and social life, indigenous culture, and the stories of imperialism.

Think about other places where flowers are featured prominently in the museum.