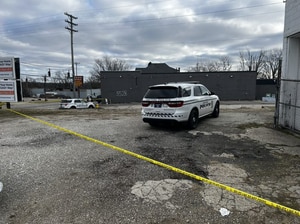 The Dayton Police Department is on scene for a homicide investigation

Dayton Police Department responded to reports of a possibly deceased person on the 3500 block of W. Third Street around 9:10 a.m., according to the first emergency scanner traffic.

Dayton Police Sergeant Creigee Coleman confirmed that crews were on the scene for a homicide investigation.

>> Suspect in custody after fatal shooting near Dayton apartment complex

News Center 7 has a team on site. They report seeing five Dayton Police cruisers at the scene.

Officers used police tape to seal off a drive-thru at the corner of W. Third St. and Upland Ave. Part of Upland Ave. has also been dropped off.

We’ll update this story as we learn more.