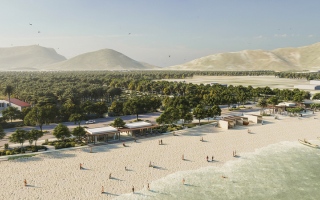 His Highness Sheikh Diab bin Mohammed bin Zayed Al Nahyan stressed that providing a decent life for citizens in various regions of the country is a priority for the leadership of the UAE to ensure social stability and improve living standards and quality of life.

His Highness said that the Emirates Villages project aims to build a new model in the development of villages in terms of development and tourism, expressing his thanks to His Highness Sheikh Hamad bin Mohammed Al Sharqi, Member of the Supreme Council and Ruler of Fujairah, for his great support in starting work on the first village.

His Highness Sheikh Diab bin Mohammed bin Zayed Al Nahyan added: “I am proud of everyone’s cooperation to make the Emirates Villages project a success. Our goal is for the people of these villages to be part of the development process.”

His Highness Sheikh Theyab bin Mohammed bin Zayed Al Nahyan stressed that the project constitutes a qualitative step towards achieving the vision formulated by the leadership, to create a sustainable development model that suits the remote regions of the country, and benefits from the human energies and natural capabilities of each region.

The project to develop the “Qidfa” area comes within the strategy of the Emirates Council for Balanced Development 2022-2026, which aims to achieve sustainable growth in remote areas in the country, through an innovative methodology that supports the creation of mini-economy.

Sultan Al Jaber, Minister of Industry and Advanced Technology, Vice-Chairman of the Emirates Council for Balanced Development, said: “The Emirates Villages projects represent a distinguished development model that is in line with the leadership’s vision, and relies on effective partnership between the government sector, represented by the Emirates Council for Balanced Development, and the private sector. and the societal sector. This pioneering project represents a model for balanced and sustainable economic and social development.”

He pointed out that the project aims to develop tourism potential, introduce the distinctive capabilities of villages, and launch development projects for youth in cooperation with a group of strategic partners. The Qadafa area development plan aims to attract 100,000 tourists annually, by developing tourism potentials and introducing the distinctive capabilities that the region enjoys through the media, to enhance its location as a tourist destination. The plan also works to launch 50 development projects for the region’s youth, as well as train 200 youth. And young women in various fields and sectors, in cooperation with a large group of strategic partners from the public and private sectors.

The project’s work mechanism relies on five tracks, which include developing development projects, coordinating and beautifying the village, and raising awareness of the historical and archaeological dimension of the region, as an important part of the history of the Emirates. And the ingredients that the region possesses, in a way that enhances its presence on the map of domestic tourism in the country.

The development paths of the “Qidfa” development plan attach great importance to youth, by providing them with all means of support, enabling them to unleash their energies, and raising their participation in various development paths. This path includes the establishment of commercial spaces, a local market for farmers, and the development of innovative ways to market agricultural products to the people The region in all emirates and cities of the country.

The path aims to provide the necessary support to activate business and create suitable opportunities for people in various economic and tourism sectors. In addition, investment opportunities will be created for the private sector, as it is a key partner in the development process of the region, especially in the tourism sector, which has promising potentials, which would make Qidfaa one of the leading domestic tourism centers in the country. The plan relies on empowering young people in the agricultural craft within the framework of achieving optimal utilization of the great potential of the agricultural sector in the “Qidfa” region, as the project seeks to link them with the companies and stakeholders concerned, with the aim of helping them develop their businesses.

The track includes supporting farm owners, and supporting the private sector to establish factories for dates and figs, which contributes to creating new jobs for the people of the region, and enhances cooperation with technical and specialized companies in the country to train youth in the region and provide them with remote work opportunities.

The path of developing development projects is based on the construction of new pedestrian roads and bicycle paths between farms, linking them with the waterfront, in addition to developing the streets leading to the waterfront, and constructing car parks. The path also includes the establishment of a council for the people of the region, the establishment of a central community and commercial square, as well as the construction of pedestrian walkways.

In the course of landscaping the village, a tourist entrance will be built, and informative boards will be placed in all areas, in addition to renovating and unifying the side walls, to create an attractive appearance and a tourist identity that reflects the unique natural capabilities of the region, and highlights it as a tourist center.

The path includes the development of the two-kilometre waterfront, and its afforestation and shading, to be the tourist and commercial center of the region, based on its natural and environmental components, as it extends on the coast of the Arabian Sea, which provides visitors with a wonderful experience amidst stunning landscapes.

This path depends on defining the historical places and archaeological sites that spread in the region, and defining them as an important part of the history of the UAE. .

ALSO READ  Rain and a noticeable drop in temperature tomorrow

Historical roots and a promising future

“Qidfa” is an important part of the historical depth of the UAE, as the village’s history dates back to the era of “Wadi Suq”, which is estimated to date back to more than 2000 years BC, while “Qidfa” includes many historical sites and artifacts dating back to ancient times, such as Limestone, Bronze and Iron Age. It also has many economic components that enhance its position on the map of economic regions and villages in the UAE, as it includes an electric power plant built by the state at a cost of 10 billion dirhams, to provide energy for about 380,000 homes.

The village of Qedfaa is famous for agriculture, and it is one of the main activities in it, as it is characterized by the fertility of its land, and its residents inherit this profession through generations, while green farms full of perennial trees spread among its valleys.

The “Emirates Villages Project” witnessed the signing of agreements with seven major partners, for social contribution in supporting the project, within the agenda of the annual meetings of the UAE government in its last session, and the contributions, which exceed 200 million dirhams, come within the framework of the involvement of all government and private sectors in the development of services and facilities. In villages, in a way that contributes to making them tourist, cultural and heritage destinations, the human energies and natural potentials of each region are employed.

■ Develop development projects in the region.

■ Coordinating and beautifying the village to support its presence on the country’s tourist map.

■ Introducing the historical and archaeological dimension of the region as an important part of the UAE’s history.

■ Launching a media campaign to shed light on the most prominent features of the region.

A school principal organizes traffic to protect students from accidents