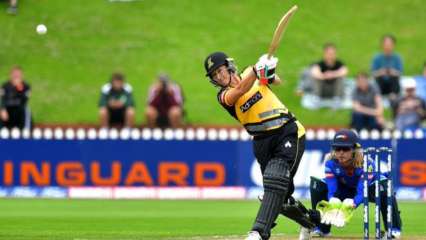 It seems that when it comes to New Years’ time New Zealand cricketers seem to have mastered the art of breaking a world record. In January 2014, Corey Anderson broke an ODI record of 17 by beating a century of just 36 balls against the West Indies in Queenstown to break the previous record of 37 balls held by Pakistani versatile Shahid Afridi. Today, in January 2021, another New Zealand player broke a world record in the Women’s Super Smash tournament. In the Wellington Blaze v Otago Sparks clash at University Oval in Dunedin, New Zealand cricket team captain Sophie Devine made history by achieving the fastest T20 century in the history of the female cricket. Her century went on with just 36 balls and broke the previous record of 38 balls set by West Indies star Deandra Dottin at the 2010 ICC Women’s World T20 meeting against South Africa in St Kitts.

Sophie Devine’s move included nine fours and nine sixes as Wellington Blaze beat Otago Sparks by 10 wickets. The blow was even more remarkable considering she was in managed isolation for 14 days after returning from Australia. But, Sophie Devine showed no rust as her potency continued. One of the shots she hit touched a girl sitting on the embankment and she was slightly injured. After the match, Sophie Devine checked out the girl and she received a signed jersey.

It was Sophie Devine’s first time playing competitive cricket since November 25, when she played for the Perth Scorchers in the Women’s Big Bash League. Speaking to stuff.co.nz, Sophie Devine admitted she was nervous but said she only focused on smart cricket. “(I wanted to) know where my holes were, trying to manipulate the pitch … I felt like I knew where they were trying to bowling so if I could manipulate myself around the crease I could open up areas of the pitch. So, yeah, I’m happy with how it went today, ”Devine said.

A hat and a snap.

All classes of @ sophdevine77 after the game. She went to sit with the fan who got hit on her sleeves.

The assault was such that Wellington Blaze hit the target of 129 in just 8.4 passes. The Otago Sparks only managed 128/7 with Jess Kerr and Leigh Kasperek limiting them to a below par score. The Wellington Blaze sit first in the Women’s Super Smash tournament while the Otago Sparks are second from the bottom with eight points in five games.

ALSO READ  Dad always wanted to see me play test cricket: Mohammed Siraj explains why he broke down during the national anthem

Sophie Devine is also a worthy bowler, having respectively taken 73 and 91 wickets in ODI and T20I at a good average. Her presence on the New Zealand cricket team has made her a force to be reckoned with.