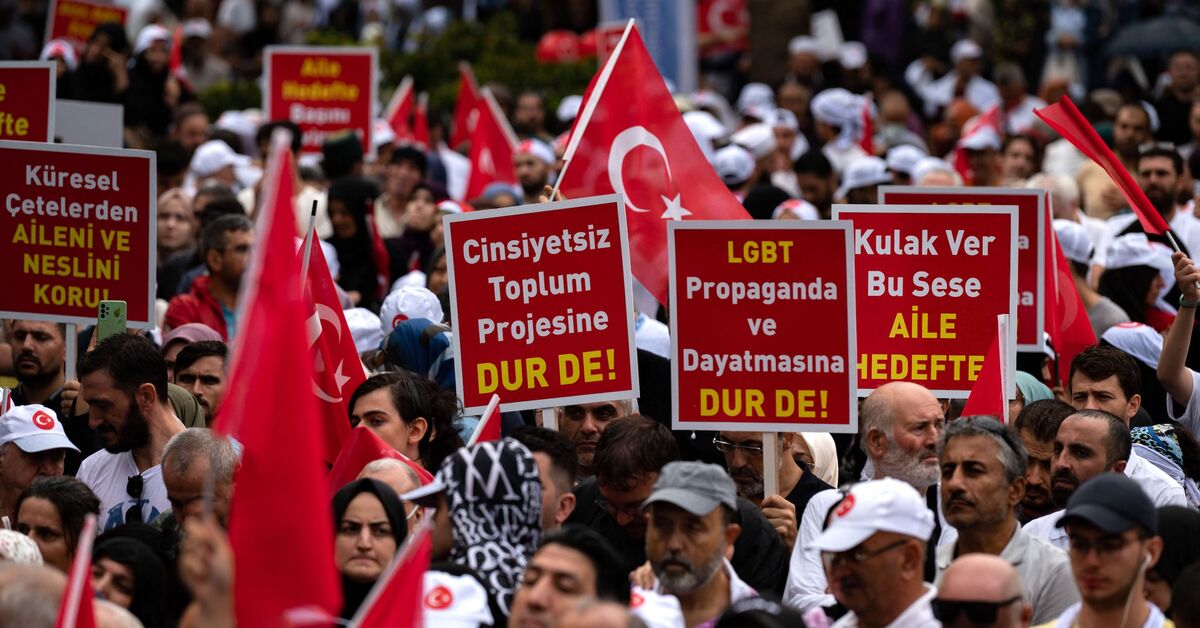 Thousands gathered in the conservative heart of Istanbul on Sunday to urge the government to change its laws to protect the family by punishing homosexuality and banning activities that support the LGBTQ movement.

The Big Family Gathering, attended by about 150 conservative non-governmental organizations from across Turkey, called out the government to shut down LGBTQ associations; prevent any action or expression of support for homosexuality in public places; ban LGBTQ “propaganda,” especially those aimed at children on screen; and punishes “all perverted movements that undermine traditional family values”.

The petition, titled “Protect your family and generation from perversity,” was signed by 150,000 people, according to Kursat Mican, chairman of the Islamo-nationalist Unity of Opinion and Struggle Platform, which hosted the meeting.

The rally in the conservative district of Fatih is the latest in Turkey’s growing barrage of anti-gay utterances and acts. Although homosexuality is constitutionally legal in Turkey and was sanctioned in the mid-19th century during the Ottoman Empire, local and international groups are expressing concern about the growing hate speech against the LGBTQ community, especially over the past seven years. For example, the LGBTQ rights group ILGA Europe placed Turkey second to last – just ahead of Azerbaijan – in its assessment of 49 European and Central Asian countries in its 2020 report. These include statements from Turkey’s head of religious affairs accusing homosexuals of “spreading the disease” at the height of the COVID-19 pandemic or President Recep Tayyip Erdogan telling people not to listen to “lesbian schmesbians”.

The meeting also demonstrates the rising profile and vocation of the anti-LGBTQ lobby. Pride marches in Istanbul — once the region’s most colorful and largest gatherings — have been banned since 2015, and smaller demonstrations have been brutally put down by police. Several universities, including the elite Bogazici University, have been forced to close LGBTQ clubs, and songs or gay film festivals supposedly advocating homosexuality have been banned from screen and airways. When the government announced its withdrawal from the Istanbul Convention, the pan-European agreement to combat domestic violence, one of its arguments was that the agreement was “hijacked by a group of people trying to normalize homosexuality, which is incompatible with social and family values.”

Sunday’s gathering brought together unlikely bedfellows, creating scenes bordering on the absurd. Women in headscarves renounced banners alongside ultra-secularist women who have long lamented the negative impact of Netflix and other digital services. Footage shown a group of participants, members of a religious sect, dressed in white Islamic robes, protesting to music being played. “We will walk in silence in the name of God. Turn down the music, the believers of Mohammed,” one shouted, while another shouted, “If you’re here to listen to music, go to a concert.”

One of the keynote speakers, former beauty queen Tugce Kazaz, a convert to Islam after changing religion four times over the course of two decades, called out “Muslims” to fight for their values ​​and protect the family from LGBTQ impositions in life and on streaming platforms.

The meeting was supported by the conservative Justice and Development Party government and its informal nationalist allies. Turkey’s media watchdog, RTUK, announced it in a public place, and Turkish Deputy Culture Minister Serdar Cam praise the event. “Families raising their voices to protect their children from those who want to pervert future generations … will meet today at 1430,” he tweeted on the day of the Great Family Gathering.

Kerem Altiparmak, a human rights lawyer, said the government’s support for the meeting was clear. “Big Family Gathering is openly supported by the state. Moreover, compared to other countries, Turkey is the place where more homophobic and transphobic acts of violence take place. In other words, this action has a high probability of provoking violence,” he warned.

“I couldn’t believe that a gathering showing such blatant discrimination… against one section of society could take place,” tweeted Defne Koryurek, an environmental activist who described herself as the proud mother of a strange child. In an open letter to Istanbul governor Ali Yerlikaya, Koryurek outlined her concerns that the meeting would further fuel attacks on the gay community in Turkey. “They say the purpose of the meeting is to protect the family. What about me, my husband and my beautiful, compassionate and smart child? What about our family?” she asked.

LISTAG, the association of friends and family of LGBTQ individuals in Turkey, said the march should not be hindered. “Let them hold their demonstration,” their press release read. “Let’s remember who they are, how to hold rallies that encourage discrimination and hatred when peaceful parades have proudly been banned for years.”

The group invited the friends and families of the LGBTQ community to watch online “My Child,” an award-winning documentary by filmmaker Can Candan about five families whose children were gay. One of the families interviewed was the mother and father of Irem Okan, a transsexual who was stabbed to death in 2010.

As with most social developments, dueling hashtags (#protectthefamily, #LGBTimposition and #gotoHolland on the one hand, and #notohatemarch and #loveislove on the other) immediately dominated the Turkish Twitter sphere. A rainbow that came after the rain on Sunday also became the target of controversy. “Clearly God is for the LGBTQ,” joked several Twitter users. To them, Cam, the undersecretary of culture, tweeted a short answer: “We are glad that God did not punish us with stones as he did the people of Lut. We ask forgiveness for widespread immorality on Earth and the idiots among us.”

Singer Mabel Matiz, whose recent hit “Copshop” tells the story of a gay man who was tortured by the police, called for legal action against what he called the hate march. “I call on everyone to show solidarity with LGTBQ people against the anti-LGBTQ march. … Such a thing has no place in a civilized society, and discrimination is a crime,” he tweeted.

Mican, the head of the platform, denied that they committed a hate crime. “We want to end this trend that threatens the survival of humanity by raising awareness against LGBTQ propaganda and imposition,” he said. “This rally is not against LGBTQ individuals – we would never for a moment support violence against them.”

Some banners were around the family or protecting on-screen children from what they called gay lifestyle propaganda. But others targeted LGBTQ, calling them perverted or asking them to leave Turkey and live abroad.

Participants say more of these meetings will follow. Kazaz said she is planning another family gathering in the future and has received support from several political party groups, including Dogu Perincek’s ultra-nationalist Homeland Party.

Other parties protested the meeting as discriminatory. The Pro-Kurdish People’s Democratic Party (HDP) warned against attempts to score points in politics by polarizing society. The Greens and the anti-discrimination committee of the youth wing of the main opposition Republican People’s Party also made similar statements. Most opposition heavyweights, however, remained silent. “And they would still ask for my vote?” Koryurek tweeted.