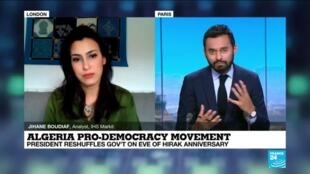 Thousands of Algerians marched in the capital and other cities on Monday to mark the second anniversary of the North African nation’s anti-government “Hirak” protest movement that rocked Algeria before the Covid pandemic -19 does not force him to leave the street.

Sing “A Civil State, not a Military State!”, “Enough is enough!” and “The people want independence!”, demonstrators crossed the center of the capital waving national flags, watched by a large number of police officers.

Some of the protesters hope to revive the bi-weekly Hirak protests that swept through Algerian cities from February 2019 for more than a year, regularly bringing tens of thousands of people to the streets until the start of the global pandemic.

“We are determined to continue our fight until victory,” said Djamel Habi, a student.

However, other protesters said the march was symbolic rather than a return to regular protests, or that without a clear opposition leadership, they were not yet sure whether they should continue the protests.

The Hirak movement in April 2019 forced longtime President Abdelaziz Bouteflika to resign, and Monday’s protest in Algiers was the largest since rallies were suspended in March last year due to the pandemic.

Security checkpoints created traffic jams across the city, with identity checks carried out around key flashpoints, with several arrests made.

Police tried to prevent protesters from gathering around the Grand Post Office, which was at the heart of the mass protests that began in Algiers and several other cities on February 22, 2019 to oppose Bouteflika’s candidacy. for a fifth term.

Elsewhere in the country, marches took place on Monday in particular in Annaba, Oran, Sétif and Mostaganem, according to witnesses and reports on social networks.

On the eve of the Hirak’s second anniversary, Algerian President Abdelmadjid Tebboune announced a limited government reshuffle in an attempt to prevent further gatherings.

The reshuffle saw few major changes from Tebboune, who was once prime minister under Bouteflika.

Among those detained are Prime Minister Abdelaziz Djerad and Minister of Justice Belkacem Zeghmati, seen as a symbol of Algeria’s legal repression against protesters and opposition activists.

Tebboune also signed a decree dissolving parliament, paving the way for early elections, for which no date has yet been set.

In a gesture of appeasement on Thursday, he announced pardons that have so far led to the release of nearly 40 pro-democracy activists, including opposition Rachid Nekkaz and journalist Khaled Drareni, who has become the symbol of ‘a struggle for a free press.

Tebboune returned to Algeria last week after spending most of the past four months in Germany receiving medical treatment after contracting Covid-19.

Zaki Hannache, a 33-year-old activist, said Hirak supporters were unimpressed with the president’s reshuffle and his call for early parliamentary elections.

“The reshuffle does not interest me, they are the same old people. Same with the parliament, the new (deputies) will work, like the current regime, for their own interests, not for the people,” he said.

Last Tuesday, thousands of Algerians gathered in the northern city of Kherrata, where the first major protest erupted in 2019 against Bouteflika’s candidacy for a fifth presidential term.