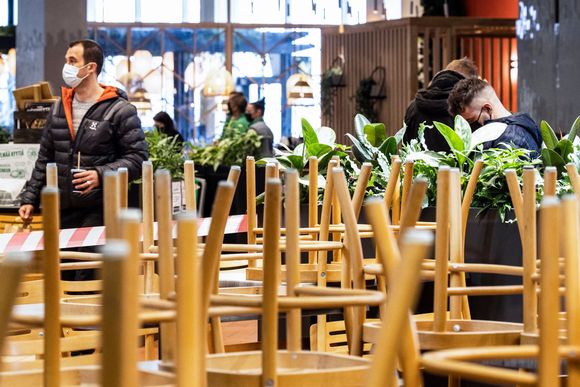 Turun Sanomat from Turku is among newspapers reporting that the Prime Minister Sanna Marin (SDP) says she is “cautiously optimistic” that life will improve by next summer with a gradual lifting of restrictions, and that the holiday season at the end of June could be “fairly normal”.

The government met Wednesday evening to discuss a plan to lift the restrictions. The discussion is expected to continue Thursday with the political opposition.

According to Marin, the restrictions must be lifted in reverse order. The first step will be to lift the state of emergency and end the use of the Emergency Powers Act. National restaurant restrictions can be lifted on April 18.

A key principle is that restrictions on the activities of children and young people should be lifted before those of adults.

According to Marin, a large-scale opening of public events could be possible in June or early July.

However, Turun Sanomat notes that Marin added that it is not yet possible to give an exact date for a return to normal.

One reason is that restrictions on schools, recreation and gatherings in public spaces are largely the responsibility of municipalities and regional authorities.

According to a project seen by Helsingin Sanomat on Wednesday, the lifting of restrictions would begin this month and run gradually through August. Schools would resume contact with education in May, and libraries and museums, for example, could reopen at the same time.

Restrictions on gatherings would be lifted between June and August. The objective would be to assess the conditions for lifting the restrictions every two weeks.

Tabloid Iltalehti reports that the government will continue to work on the plan on Thursday and discuss it with all parties represented in parliament.

Prime Minister Marin tweeted on Wednesday evening that the plan would be presented on Friday for a week-long series of comments, and separate talks will be held with labor market organizations and the municipal sector.

The Helsingin Sanomat daily examines plans by cruise lines and Finnair to provide summer travel opportunities as restrictions are eased.

Shipping companies, he writes, are preparing to increase the number of vessels in service and the number of departures again, but that depends a lot on the situation and the pace of vaccination in Finland, Estonia and Sweden.

“Vaccinations and tests play a key role. If all goes well, passenger traffic will gradually resume from the summer. Local tourism will probably be the first to return.” Tiina Tuurnala, CEO of the Finnish Shipowners Association, told Helsingin Sanomat.

One of the main reasons that cruises can recover is that ships have enough space for passengers to maintain a safe distance.

In March of last year, the cruise ship industry halted most passenger traffic due to coronavirus restrictions imposed by authorities. Leisure travel recovered somewhat last summer, but travel restrictions were re-imposed in August.

Of the seven Viking Line vessels, four are currently in service. Viking Line plans to open special cruises to Gotland, Åland and Riga, among other possible destinations.

Tallink Silja intends to take decisions in April on the reintroduction of its ship Europa on the Helsinki-Tallinn route and on the restart of services on its Helsinki-Turku and Helsinki-Riga routes.

Finnair, for its part, says its exit plan will closely follow the national strategy.

“The return from travel depends very much on the development of immunization coverage and how different countries, including Finland, start to lift travel restrictions,” according to Päivyt Tallqvist, Communications Director of Finnair.

Finnair continued international flights throughout the pandemic, but only to around half of its 100 normal destinations. The number of flights has also increased from around 350 daily flights to 75. Many routes have been flown with smaller-than-normal planes, and the passenger volume is about 10 percent of the number before the pandemic. .

A citizens’ initiative calling for revisions to Finland’s transgender law has collected 50,000 signatures and will now go to parliament, reports the Aamulehti of Tampere.

Entitled “The Right to Be Initiative”, the call to change the provisions of the law was launched Tuesday and has collected all the necessary signatures by Wednesday evening.

Among the changes the initiative foresees is the removal of requirements for transgender people to be medically diagnosed and sterilized as conditions for official recognition of gender change.

If approved, the official sex change in the future would be a matter of filing a notice for anyone over the age of 15. In the case of younger people, the consent of a guardian would be required.

In addition, the so-called “transgender registry”, ie the list of people who have legally changed their sex, would be removed from the population registry.

Finland’s current transgender legislation, which dates from 2003, has been criticized both nationally and internationally as a violation of human rights agreements.

Ilta-Sanomat reports that the Finnish National Archives have announced the end of their cooperation with the Finnish postal service Posti, after an incident in which the company claimed to have lost a shipment of archival documents.

The case concerned documents requested by an amateur historian in Helsinki from the Jyväskylä office of the National Archives.

They were handed over to Posti for delivery in January, but the shipment did not arrive in Helsinki. Following a complaint, an initial search for the shipment by Posti was carried out empty-handed.

Hours later, Posti announced that the shipment had been found.

Director of National Archives Päivi Hirvonen told the newspaper that even though the materials have been salvaged, that doesn’t change the agency’s intention to solicit bids from courier services for the transport of its materials.