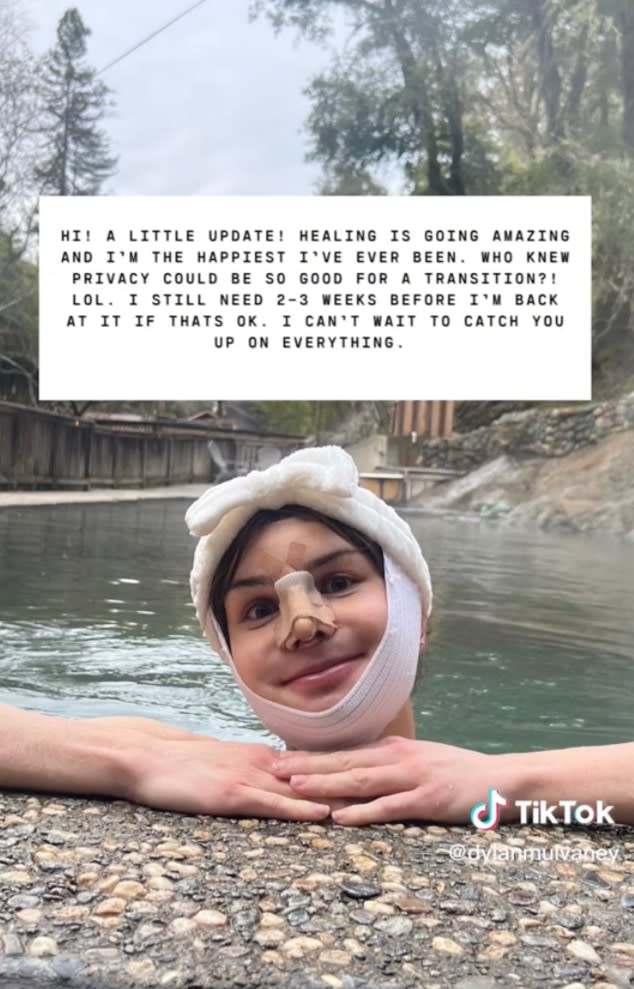 The TikTok star gave fans an update on how she’s doing two weeks after undergoing facial feminization surgery. Although Dylan still has some way to go in terms of healing, she is already experiencing a new level of joy.

“Healing is going great,” Dylan shared in a Jan. 3 TikTok. “I’m the happiest I’ve ever been.”

As shown in the video, Dylan had a bandage on her face and a plaster cast on her nose. While the 26-year-old has yet to publicly reveal her full face post-surgery, she noted that she will take a bit more time to heal.

“Who knew privacy could be so good for a transition?” Dylan continued. ‘I need another two to three weeks before I can continue, if that’s okay. I can’t wait to update you on everything.’

Reflecting on her own transition, Dylan continued her video by sharing a post about respecting different paths.

“A gentle reminder of the start of the new year — not all transgender people desire confirmatory surgeries or hormones,” she noted. “They’re still trans. But when we do, it’s a necessity and a win.”

From attending a pre-op doctor’s appointment to being dropped off at the surgery center, Dylan has kept fans in the loop both before and after her facial feminization process. After surgery, she shared a selfie she took in a hospital bed. Dylan paired the photo with a letter to her new look.

For the latest breaking news, click here to view the E! News app