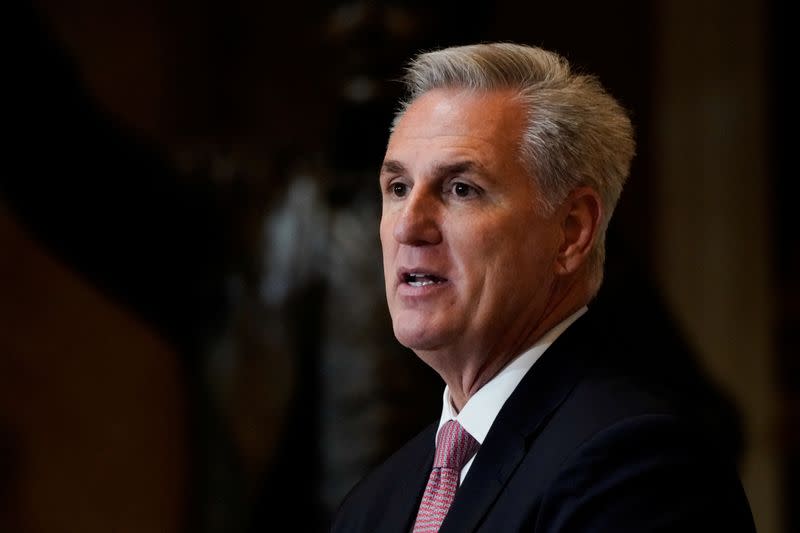 WASHINGTON (Reuters) – Republican leader of the United States House of Representatives, Kevin McCarthy, said on Friday that he does not recall urging then-White House aide Cassidy Hutchinson to prevent Donald Trump from going into office on Jan. 6, 2021. Capitol would come despite her affidavit to the contrary.

Hutchinson — the key witness in a televised hearing before the House committee investigating the Jan. 6 attack on Congress by Trump supporters — testified under oath that a “frustrated and angry” McCarthy called her that day after President Trump spoke during a nearby meeting. meeting had announced that he would join a march to the Capitol.

“Mr. McCarthy called me with this information,” Hutchinson told the panel on June 28. “I was confused, because I didn’t know what the president had just said. … He (McCarthy) said, ‘Well, he just said it on the podium, Cassidy. Figure it out. Don’t come up.’ ” She also said McCarthy had been in contact with her about Trump’s plans in the days leading up to the attack.

But McCarthy insisted Friday that he could not remember speaking to Hutchinson, then an aide to White House Chief of Staff Mark Meadows.

McCarthy said he had not watched Trump’s speech prior to the attack on the Capitol and was unaware that Trump said he would join his supporters in marching there.

The panel examines Trump’s role in the attack, which took place as the House and Senate worked to certify Democrat Joe Biden’s 2020 presidential election victory.

Trump ultimately did not join his supporters because the Secret Service prevented him from accompanying them. But the commission has presented evidence that the crowd was animated by its repeated false claims that the election was stolen by mass voter fraud.

Days after the June hearing, McCarthy dismissed Hutchinson’s testimony as “hearsay.” He insists the panel is conducting a biased investigation.

McCarthy said he instead called then-Deputy Chief of Staff Dan Scavino and senior White House adviser Jared Kushner in an attempt to locate the president on Jan. 6.