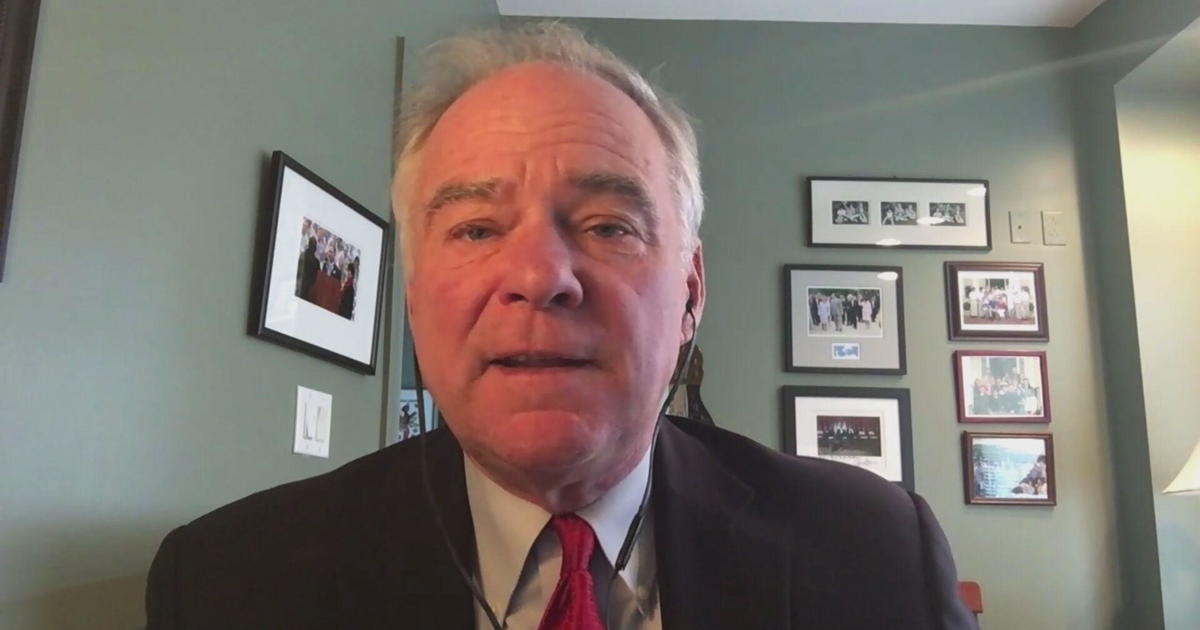 The following is a transcript of an interview with Democratic Senator Tim Kaine of Virginia that aired on “Face the Nation” on Sunday, January 22, 2023.

MARGARET BRENNAN: We’re back with Democratic Senator Tim Kaine of Virginia. I know that as a governor and senator in the state of Virginia you have experienced a number of mass shootings. I wonder how you felt about Monterey Park this morning?

SEN. TIM KAINE: Margaret, it’s… it’s like scar tissue that reopens every time these things happen. We are reminded in Virginia of the Virginia Tech shooting in April 2007. My heart goes out to this community. I’m afraid the perpetrators are still on the loose. So let’s first make sure law enforcement has the support to catch up. And then we have to support those survivors and everyone affected.

MARGARET BRENNAN: Okay, Senator, we need to take a break and I want to talk to you further. We will be right back.

MARGARET BRENNAN: Welcome back to Face the Nation. And we continue our conversation with Virginia Senator Tim Kaine. Senator, yesterday we learned for the fifth time that another tranche of classified information is being held in the President’s personal residence. How does a senator accidentally take home classified material?

SEN. KAINE: Margaret, I don’t really know the answer to that question because as a senator on the Armed Forces and Foreign Relations Committees I’ve looked at classified materials. But when I do, it’s always in a secret facility where I don’t have access to the materials except to sit there and read them. That is why an independent investigation and an independent prosecutor are needed. How many documents are we talking about? tens? A handful or hundreds. How serious are they? Why were they taken? Did anyone have access to them? And is the president cooperative? And I think by all accounts it suggests that, yes, of course, he’s cooperative as everyone should be. But these are the reasons why this independent prosecutor and an investigation are needed.

MARGARET BRENNAN: You are one of the few Senate Democrats who have said that you are concerned about this issue. I wonder how concerned you are. And doesn’t this politically damage the White House and the president in terms of trust and credibility?

SEN. KAINE: Well, again, those questions depend on the answer to the question that we’re going to get in this study. I mean Margaret, you know, this government tends to over-classify when they look at a document and they have to analyze it to decide whether to classify, sometimes they just market-classify. I read it in the SCIF and say Margaret reported on it a month ago or The Washington Post has been telling me this for the past six months. So you have to look at the scope, how seriously did someone have access? And those questions need to be answered before we decide. Is this how important a problem is this?

MARGARET BRENNAN: Right. And that can take a while. I want to ask you about some issues that Congress will soon have to address. As you know, the White House wants a clean hike to the debt limit with no strings attached. Senator Manchin said it was a mistake by the White House to refuse to negotiate with Republicans. Do you think that position is changing? Is it a mistake?

SEN. KAINE: First, we need to lift the debt ceiling cleanly, because the 14th Amendment to the Constitution says that no one should question the creditworthiness of the United States. This is about whether the US pays our credit card or not. And I don’t think anyone should flirt with not paying for the US credit card, which is what the Republicans are doing. So the position of the White House is correct. We need to raise the debt ceiling. But if Republicans say they won’t do it and they threaten our credit rating because they want austerity, let them put austerity on the table. Is the social security and health care cuts that Rick Scott wanted to make austerity aid to Ukraine in the midst of a war between a democracy and an illegally invading dictator? Have them put on the table what they want to cut so the American public can see what their priorities are.

MARGARET BRENNAN: Speaker McCarthy has said that the president has invited him to speak, have a conversation and discuss a responsible increase in the debt ceiling. So what does that mean? How is this politically dressed up so that we avoid the cliff?

SEN. KAINE: First of all, that’s a good thing. I’m very, very glad that the President and Speaker McCarthy are talking. That’s really positive. How do we solve this? Jeff Merkley and I have a bill that is based on an earlier solution that Senator McConnell led during the Obama administration, when there was a similar dilemma around the debt ceiling. And Senator McConnell said, look, we’ll allow the president to raise it subject to congressional disapproval. And that was done. And we think that should be the norm anyway. So we have a bill called the Protect Our Credit Act, which would basically say that the president should cover the debts of the United States. And if that includes raising the debt ceiling, the president can do that. But if Congress disapproves, you can fast-track a vote up or down in Congress. And I think this is the right solution for this.

MARGARET BRENNAN: Before I let you go, you’re in the armed forces. How concerned are you that Defense Secretary Austin has left Germany without Western allies agreeing to supply tanks to Ukraine?

SEN. KAINE: Margaret, there are — there are some differences on what exactly — and what’s the timing in terms of delivering equipment. But we have put together a global coalition to support Ukraine. The unity was very strong and the support, bipartisan, bicameral legislature in Congress was very strong. And I think that will continue.

MARGARET BRENNAN: Senator Kaine, thank you for your time today.