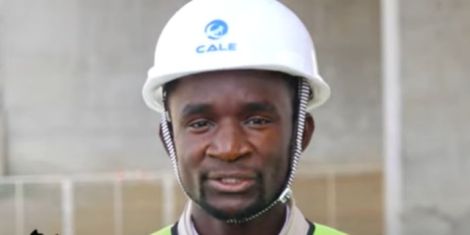 Engineers and site supervisors used a variety of techniques and tricks to build the 17-mile Nairobi Expressway that runs from Mlolongo to Westlands.

Former President Uhuru Kenyatta launched the elevated highway in October 2019, with some officials reporting that the project was conceived after Chinese officials encountered traffic congestion from the Jomo Kenyatta International Airport (JKIA).

According to one of the site engineers, Fredrick Kojo, the construction of the road involved laying good drainage systems, installing foundations, placing piers and laying the road.

Kojo explained that the process was divided into four key sections to ensure efficient and timely execution.

The Nairobi Expressway project was implemented as a public-private partnership with the China Road and Bridge Construction Corporation (Kenya) (CRBC) on a build-operate-transfer model. It cost north of Ksh62 billion.

Speaking with former citizen TV reporter Enock Sikolia through his YouTube channel, Kenyan historianKojo revealed that after surveying and identifying the construction site, drainage was the first component that engineers involved in the construction had to address.

“Areas around JKIA had large pools of water. What we did was place generators and know where we had existing drainage systems, especially along Mombasa Road and the surrounding areas, Kojo explained.

“To pump up this water, we pumped to the design which we then channeled into existing drainage systems,” he added.

They then contracted the government through the Ministry of Water to rebuild the water pipes.

According to engineers, laying the foundation was key to the construction of the causeway. To ensure the rigidity, the engineers deploy drills, rotary chucks and cranes to break the rocks.

After drilling and digging, concrete piers were built. They were five meters in diameter and 10 meters deep.

“We had to make sure that the underlying rock was good. If there was no favorable soil underneath, we replaced it. The concrete for the foundation that we had to make sure was strong enough to support the beams and piers,” Kojo detailed.

This was done to ensure that the beams were held firmly above the ground.

To build the piers, steel reinforcement cages were placed and hoisted, after which steel girders were attached around the cages. Concrete was then pushed into the cages, giving the columns their shape. The steel modes were removed once the concrete dried.

The outgoing Transport Minister, James Macharia, stated it was essential because of the space available.

“When they used some piers, they had to dig deeper and strengthen the foundation. The same technique was used when building the Standard Gauge Railway,” explains Macharia.

Construction of the road 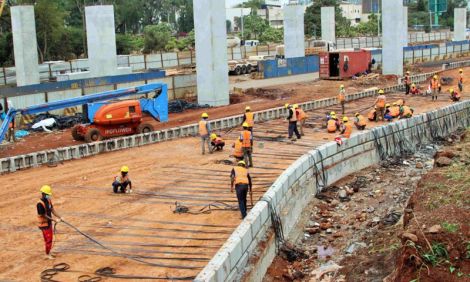 Archive photo of engineers laying steel on the Nairobi Expressway.

Engineer Kojo, along with other Chinese experts, played a key role in building the road from Mlolongo to James Gichuru Road in Westlands. He explained that different types of soil were used when laying the road construction.

The accumulated huge mounds of soil were compacted before the bitumen was laid.

“Engineers made sure that concrete maintained its quality from the factory to laying on the road. This was done by maintaining the right amount of temperature, measuring the soil texture and mixing it to perfection,” explains Kojo.

“The supervision with the Chinese team was very critical. That was the standard principle of the construction. They employed more than 4500 TBEN in different sectors. They were then divided into work gangs.”

“Each gang had a supervisor who had strict timeliness and a clear job description to ensure on-time delivery of the project,” Maringa added.

Planting flowers along the 27-kilometer road was assigned to another team. Other experts were also hired to build the toll plazas and repair various additional facilities on the road, such as street lighting and road signs.

After construction was completed, Moja Expressway was contracted to maintain the road and oversee operations. The company was tasked with helping to recoup the money pumped into the project before handing it over to the Kenya National Highway Authority (KeNHA).

In July 2022, Uhuru launched the road after months of testing. He argued that the project was key to opening up opportunities in the country.

“Since we opened the road for public trials in April, it now takes between 15 and 24 minutes to drive from Mlolongo in Machakos County to Rironi in Kiambu County. Before the highway, that journey would take at least three hours, which is the equivalent from flying to Addis Ababa and back,” explained Uhuru. 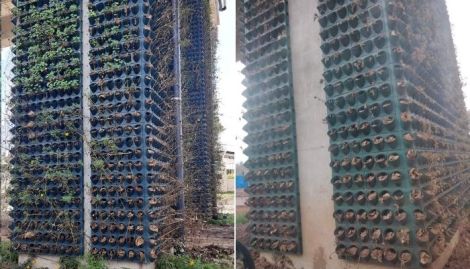 Sections of withered plants along the Nairobi Expressway.