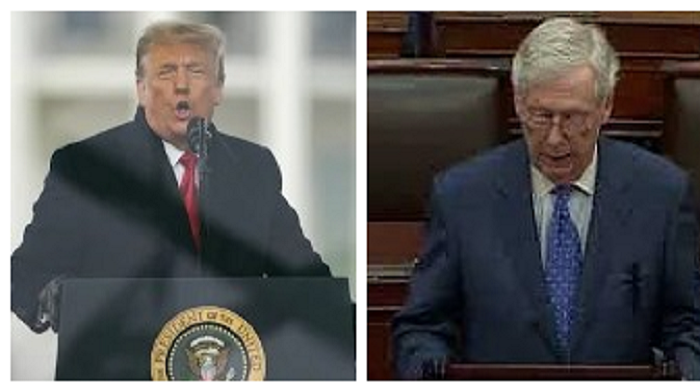 Donald Trump is calling on the Republican senators who voted for the $1.7 trillion omnibus spending bill to replace it as soon as possible.

The former president earlier today called on the GOP to “prime them all” in a post on his Truth Social media platform.

Trump began by congratulating new House Speaker Kevin McCarthy before lashing out at Senate Minority Leader Mitch McConnell and the other Republicans who voted for the spending bill.

“We have to stop Mitch McConnell now… It’s like he just doesn’t care anymore, he’s pushing through everything the Democrats want,” Trump added. “The quickly approved $1.7 TRILLION bill from the week before was TERRIBLE.”

The 2024 presidential candidate noted that if the omnibus had stalled, the issue of spending could have been taken up by a new “United Republican Congress.”

RELATED: Trump: Democrats must have “something really big” about Mitch McConnell

TBEN previously reported that omnibus spending passed within days of Republicans taking control of the House, relinquishing purse power for the GOP until September 2023.

The bill included a revision of the voter registration law to further strengthen institutional power, along with nearly $45 billion in aid to Ukraine.

Two of the senators mentioned above — Blunt and Shelby — have since retired, which at least explains it their willingness to sell their peers without worrying about the consequences.

Locking arms with the Democrats over spending seemed like a deliberate attempt to block a GOP House of new pro-Trump representatives from immediately diving in and tightening Ukraine First spending.

Especially after seeing the recent Speaker fight, which showed that true conservatives have more power than expected.

The vote on the spending bill was also a brutal reminder to voters that when it comes to spending taxpayers’ money, the two political parties in this country are really on a relatively united front.

No one – NO ONE – in that list can ever claim to be fiscally conservative ever again.

They can never again pretend that the deficit or out-of-control spending is ever a problem again.

Trump has been highly critical of Bill spending

This isn’t the first time the former president has criticized Mitch McConnell and Republicans’ support for the massive $1.7 trillion bill.

When McCarthy struggled to earn the votes for Speaker, Trump targeted McConnell and his “RINO allies” for “unrest” in the Republican Party.

He added that part of the unrest stemmed from the distrust fueled by GOP lawmakers who voted in favor of the omnibus spending bill.

The real problem, he explained, is the Republicans and their leaders who “constantly capitulate to the hopeless Joe Biden and the Democrats.”

President Trump: “There is so much needless turmoil in the Republican Party, due in large part to people like… Mitch McConnell, his ‘wife’… and their RINO allies, who are giving everyone a hard time by constantly capitulating to Hopeless Joe Biden and the Democrats.” pic.twitter.com/mKkX0uXyOI

Trump later insinuated that the Democrats must have some compromising information on McConnell after his support for the bill.

ALSO READ  Yes, they're coming for your gas stoves - and they've already started

“The Marxist Democrats must have something really big with Mitch McConnell to get him and some of his friendly ‘Republican’ senators to pass the horrible spending bill,” he said.

Trump even offered a nickname: the “ominous” spending bill.

Soon after, McConnell made one joint act with President Biden to celebrate “infrastructure” spending.

There’s nothing to celebrate about a waking, bloated infrastructure bill full of waste, union gifts, and green giveaways.

Republicans should not be at the center of Biden’s publicity stunt. https://t.co/KH7aFBJLsk

Trump has described McConnell as an “absolute loser” who has given Democrats “all they want” and pressured the GOP to oust the Republican leader.

Now he wants the other 17 senators who helped pass this spending bill also impeached. It looks like 2024 will be not only a big fight against the Democratic party, but also an explosive fight to see who will be the true leader of the GOP in the future.