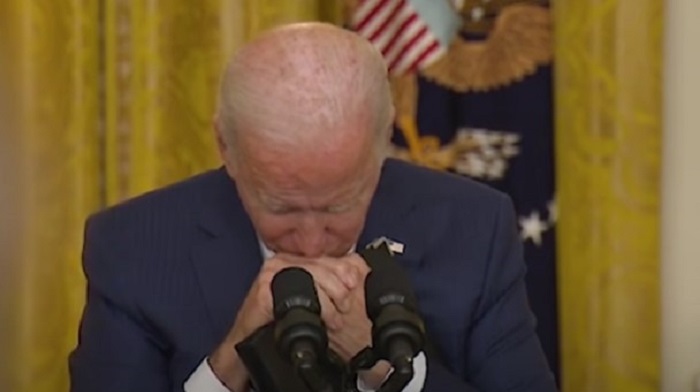 Donald Trump is calling for raids on President Biden’s homes after classified documents are discovered in a Washington, D.C. office he used during his time as vice president.

The data was discovered in an office of the Penn Biden Center for Diplomacy and Global Engagement, a “think tank” Biden used as part of his relationship with the University of Pennsylvania. The president had been an honorary professor at the institution.

CNN reports that Attorney General Merrick Garland has asked the U.S. attorney in Chicago to investigate the case.

The papers, which included a “small number of documents with secret markings,” were located in November by the president’s personal attorneys.

Unlike the president, the vice president does not have the same declassification power.

They just announced that Joe Biden was illegally holding secret documents belonging to his Vice President. I’m old enough to remember the media telling me this was impossible. So much for the indictment against Trump. Between Hillary and now Biden, this story is over. pic.twitter.com/Pv5qtqJPqe

What material was found in those documents classified by Biden is unclear.

It also remains unclear how, when faced with a similar story involving Trump, information was repeatedly leaked to the media by anonymous sources, but there have been no stories for two months since the records were first discovered.

Not to mention, Biden was an honorary professor at the University of Pennsylvania from 2017 to 2019. But these documents were in an office in Washington, DC and the federal officials never knew about them for 4 to 6 years?

It took them significantly less time to go after Trump for material he claimed was released and which he claimed was accidentally moved to his residence during a chaotic transition.

Joe Biden took secret documents from the White House when he was vice president.

The VP does NOT have the power to declassify, only POTUS.

This is a very serious crime.

DOJ & NARA can’t sweep this under the rug AND prosecute Trump.

According to the CNN report, the National Archives and Records Administration was notified by Biden attorneys immediately after the discovery and managed to keep things quiet until now.

And wouldn’t you know – the secret documents were found in this office on November 2, six days before the midterm elections.

Prior to the midterm elections, classified documents were found in Joe Biden’s think tank. Why are we only now finding out?

Contrary to what Trump has been accused of, TBEN News, which first reported on the situation, specifically states that “the documents contain no nuclear secrets.”

It seems they are already running for cover to let the people know that Biden’s taking of classified documents was not as serious as Trump’s transgressions.

Biden stole classified documents and kept them in his think tank while he was VP.

The VP has no authority whatsoever to release classified documents.

And this “think tank” received $54 million in funding from the CCP.

His actions marked an unprecedented legal effort by a sitting attorney general against the likely opponent of the president who nominated him for the post.

Tucker on Biden’s hoarding of classified documents: “It turns out Biden did exactly what he accused Trump of doing. There’s no question that Merrick Garland will unleash one of his signature pre-dawn raids on the University of Pennsylvania. pic.twitter.com/uE112wQjxU

Showing again that Garland is a partisan flak for the president and should not serve in his role as AG, there were no subsequent raids on Biden’s home to find more classified documents.

And Trump wants to know why.

“When is the FBI going to raid Joe Biden’s many homes, maybe even the White House?” he asked on the Truth Social media platform. “These documents have certainly not been released.”

Trump also linked to an April New York Post article claiming that the think tank in question received more than $54 million in donations from China through various cutouts, more than half of which were “anonymous gifts.”

Having classified documents in a location where China showers you with gifts doesn’t look good.

“Wow! The Biden Think Tank is funded by CHINA!!!” wrote Trump. “How much more information has China gotten?”

There is no indication that China or anyone else has seen the secret documents Biden kept at the think tank.

Biden was highly critical of Trump for allegedly mishandling classified documents after he left office.

“How is that possible? How can someone be so irresponsible? And I thought what data was in there that could compromise sources and methods? said the chairman. “And it’s just — totally irresponsible.”

Appearing on “60 Minutes” in September, President Biden was asked for his response to a photo showing the Trump documents recovered from Mar-a-Lago. “How is that possible? How can someone be so irresponsible,” the president said. “And it’s just — totally irresponsible.” pic.twitter.com/NaF0wz8nPy

It will be interesting to see the media slowly changing from ‘a president who has classified documents in his personal possession is treason and/or an attempt to sell nuclear secrets to Putin’ to ‘meh, it’s not much’.

They will protect Biden at all costs and the story of Trump’s actions will probably disappear, like so many other “big” stories that should end his political career over the years.

Remember, everything Trump is accused of was done by a Democrat first. These secret documents are more proof of that.