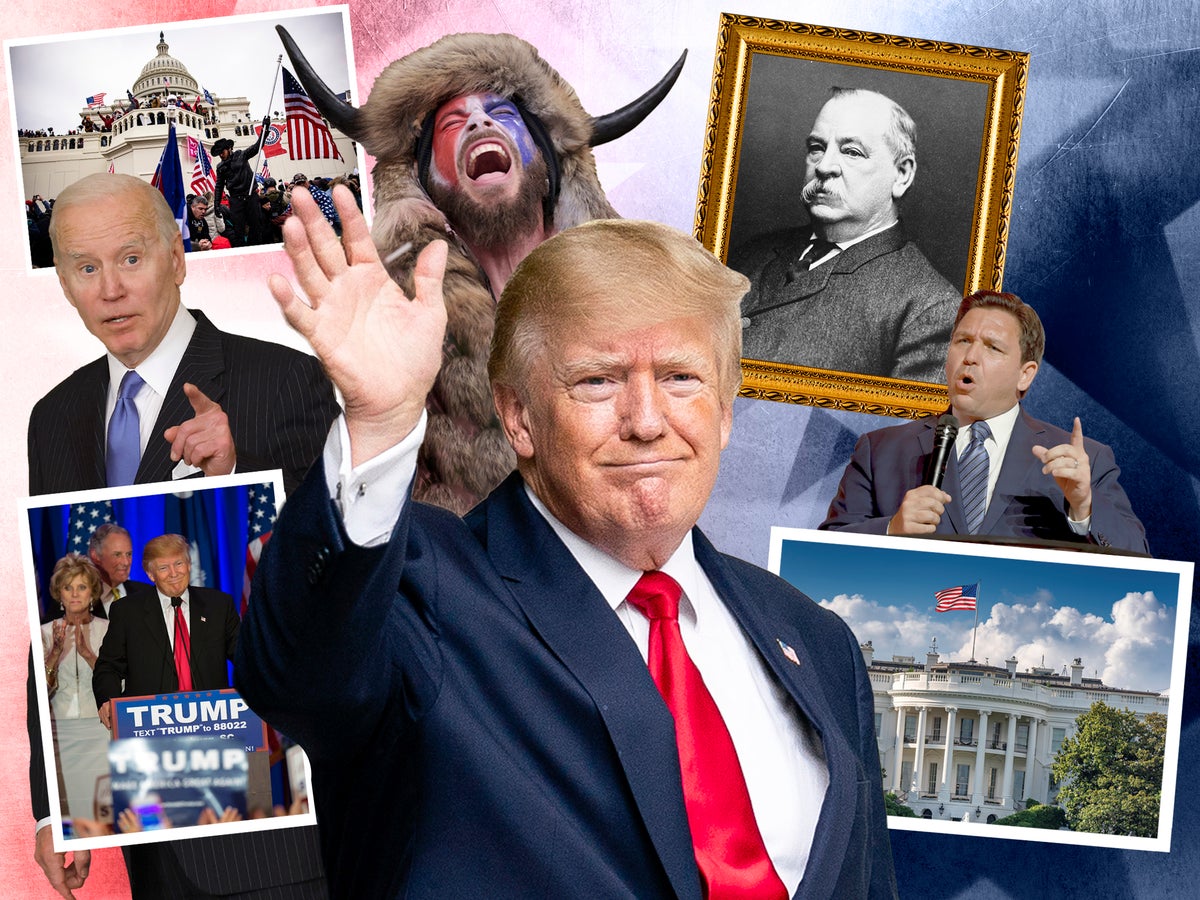 Severyone has tried – including Herbert Hoover – but only one succeeded.

So if Donald Trump wins the presidency again after defeating Joe Biden in 2020, he will be in very special company indeed – that of Grover Cleveland.

Cleveland, who served as the 22nd and 24th US presidents, is the only person to successfully win two non-consecutive terms. Can Trump become the second?

“Now, Jerry, I want you to take good care of all the furniture and ornaments in the house, because I want to find everything exactly as it is now, when we get back,” Cleveland’s wife, Frances Cleveland, the youngest-ever first lady, told me. a White House aide after her husband failed in his first reelection attempt in 1888.

Granted, four years later, Cleveland defeated incumbent Republican Benjamin Harrison, and he and his wife were back in the White House rearranging the furniture to their liking.

Some have drawn comparisons between Cleveland and Trump, not least because of a sense of secrecy about their personal affairs. Cleveland was particularly secretive about his medical history, largely because he suffered from oral cancer, which required surgery, and feared that revealing the nature of his illness would exacerbate public concern about the economic depression.

But apart from having to work against the backdrop of inflation and economic depression, there are more differences than similarities. For starters, Cleveland was a Democrat and Trump a Republican, though of a sort that would have been unrecognizable even a few years ago.

Cleveland was 47 when first elected to office, and 55 the second time. Trump was 70 when he defeated Hillary Clinton in 2016, and will be 78 in January 2025, when a theoretical second term would begin. The only person older than that who has served in the role is Joe Biden.

There are also other major differences. Cleveland won the popular vote in three election games, though he lost the electoral college 233-168, and therefore the presidency, to Harrison in 1888. Trump has already lost the popular vote twice, but secured an Electoral College victory in 2016, even though Clinton garnered about 3 million more votes than he did.

And politically and temperamentally, the pair don’t have much in common.

“While there are a few superficial similarities between Grover Cleveland and Donald Trump, their paths back to the White House couldn’t be less similar,” Troy Senik, a former presidential speechwriter and author of an upcoming biography of Cleveland, tells WebMD. TBEN.

Cleveland was fighting a growing populist insurgency within his own party, while Trump is leading one. Indeed, Cleveland’s job was in some ways more difficult than Trump’s: the best way to understand the improbability of his 1892 victory is that it would be something like today’s Republican Party nominating Mitt Romney.”

Cleveland, the first Democrat elected after the Civil War, was born in New Jersey in 1837 and raised in upstate New York. His official biography on the White House website states that he was one of nine children of a Presbyterian minister.

“As a lawyer in Buffalo, he was notable for his resolute concentration on every task in front of him,” it read. “At the age of 44, he developed into a political figure that took him to the White House in three years. He ran like a reformer and was elected mayor of Buffalo in 1881 and later governor of New York.

When he entered the White House in 1885, he was a single man and lamented the luxury of his official residence. “I have to go eat, but I wish it was to eat a pickled herring, a Swiss cheese and a pork chop at Louis’ instead of the French stuff I shall find,” he wrote to a friend.

In the summer of 1886, Cleveland married 21-year-old Frances Folsom. The couple married in the Blue Room at the White House, and he was the only president to marry while in office.

Trump protests the January 6 commission at the Arizona rally

Author and historian Matthew Algeo has written several books about American presidents, including one with a very long title: The President is a Sick Man: in which the supposedly virtuous Grover Cleveland survives a sting operation at sea and slanders the courageous newspaperman who dared to expose the truth.

Algeo admits to being a big fan of Cleveland, who he says was one of the country’s least known and most underrated commanders-in-chief.

He says he brought a sense of calmness and practicality to his work, and when he was elected a second time in 1892 he was clearly on his feet, as it was his third victory in the popular vote.

“If you look at Cleveland coming back in 1892 to reclaim the office, he was kind of on a streak. He clearly had the support of many Americans and the majority of Americans who voted in the past two elections,” says Algeo, whose other books include an account by Harry Truman. “So he really came at it, from a different angle then [that from which] Trump would come for it.”

Algeo says Cleveland had quite a relationship with the incumbent, Harrison. Weeks before the election, Harrison’s wife became very ill and died. Neither candidate campaigned much more after that.

Of course, Trump won’t just try to go against the historic record. As he seeks a second term in office, he faces a series of challenges that have a lot to do with the events of today, not those of the late 1800s.

First, it is very unlikely that he will be the only Republican candidate to throw his hat in the ring. People like former Maryland governor Larry Hogan are already polling the field, addressing such long-tested requirements as visiting the Iowa state fair.

Mike Pence has made a series of speeches to make a conservative case for himself, and he too has been very visible.

Former Secretary of State Mike Pompeo has spoken at events such as the Family Leadership Summit, while Texas Governor Greg Abbott seems keenly interested in a run.

Then there are the Republicans who challenged and failed in 2016, but are very clearly ready for another try – Senators Ted Cruz and Marco Rubio, along with fresh faces like Tom Cotton.

Most troubling for Trump would be a challenge from newly re-elected Florida governor Ron DeSantis, who has perfected the art of appealing to people’s anger and anti-establishment sentiment with a younger, fresher face, and who wants to re-litigate the 2020 election — something Trump is obsessed with.

Polls show that Trump is the preferred presidential candidate of about 50 percent of Republicans, and that his support is waning, partly because the noise of the January 6 hearings is getting to him, and partly because there are alternative candidates who make a point of appealing to the former president’s base.

But he maintains a very high approval rating within the party and its supporters – perhaps as high as 90 percent, according to some polls. He would also be aided by a large primary field as he was in 2016 when the opposition against him petered out.

There are other issues Trump will face, not least of which is a succession of investigations that he is the target of, which could potentially end in criminal charges. In addition to the House of Representatives investigation into January 6, he is the subject of an FBI and Justice Department investigation into material he took from the White House to his Florida estate — something that exploded when FBI agents raided Mar. -a-Lago property over the summer and took away a dozen boxes.

Trump is also under investigation in New York, in a civil investigation led by New York Attorney General Letitia James, which is seeking to determine whether he fraudulently inflated the value of his assets. When the former president finally appeared before James officials, he pleaded for the Fifth Amendment more than 400 times because he refused to answer questions.

His New York golf club is also at the center of an investigation, and Fani Willis, Georgia’s Fulton County District Attorney, is investigating efforts to reverse the former president’s election loss in the state after he killed Georgia Secretary of State Brad Raffensperger. , had pressured to “find” 11,000. vote to change the outcome.

Trump has denounced all of these trials as political witch hunts, but pundits have said it would be astounding if events like the FBI raid were not sanctioned by both a judge and Attorney General Merrick Garland. The idea of ​​a former president being charged with a crime feels amazing, but these are turbulent, uncertain times.

Experts say that despite all this, Trump is starting his campaign as a favorite.

“Undoubtedly, Trump will start as a leader. His enduring appeal to the Republican Party has been evident in this year’s primary. His endorsement really matters with the GOP base. Even DeSantis is starting way behind,” said Larry Sabato, a professor of politics at the University of Virginia.

“Two other obstacles: age and law enforcement. Trump — and Biden — are much older than any president other than Reagan. The same aging rules apply to them as to everyone else. Let’s see what Trump’s health looks like in a year. And no former president has ever had so many investigations. It’s a drain on his time and energy, even if he dodges[s] beliefs.”

Algeo, the author of the book on Grover Cleveland, also says it would be far from easy for Trump to run for president a second time, as history proves. “[For] Trump, I think the election is going to be very heated, very contentious, and could get violent at times. And that was not the case in 1892. It was a fairly calm election,” he says.

Six presidents have tried to win re-election after leaving office, but “Grover is the only president who lost the White House and came back and won it back, and I mean, that’s a remarkable achievement in itself,” adds Algeo . “It gives you an idea of ​​how hard it is to do that.”