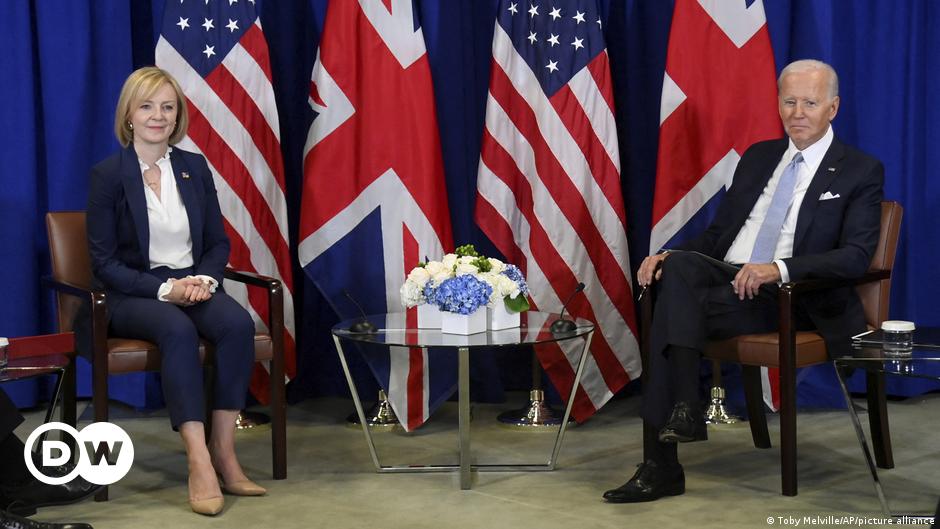 Britain’s Liz Truss and American Joe Biden spoke to the press on Wednesday ahead of their bilateral talks at the United Nations, with both expressing a desire to uphold the Good Friday Agreement that ended decades of sectarian conflict in Northern Ireland. .

The US has in the past expressed concern that British or European actions in the wake of Brexit could jeopardize the peace process in Northern Ireland, in which former Democrat President Bill Clinton played a major role.

Biden expressed his condolences on the Queen’s death and congratulated Truss on his appointment as Prime Minister. He called the UK “our closest allies in the world”, with Britain being Ukraine’s second largest donor after the US.

He started by listing a series of areas where US and UK foreign policies are broadly aligned, Ukraine and Russia, a more assertive China, preventing Iran from acquiring a nuclear weapon and energy – but he ended with a invitation to Truss to share her plans on Northern Ireland.

“And finally, we are both committed to protecting the Good Friday Agreement in Northern Ireland. I look forward to hearing what you think and how we can continue to work together,” Biden said.

Truss also started with areas of agreement and left Northern Ireland until the last in her opening statements.

“And of course I look forward to discussing the Belfast Good Friday Agreement, and how we ensure it is enforced in the future,” Truss said.

After the talks, Downing Street said Truss and Biden agreed that “the priority must be to protect the Good Friday Agreement” and preserve the peace achieved in Northern Ireland.

Whether the two governments will eventually agree on how best to achieve that may prove more complicated.

What does Brexit have to do with Northern Ireland peace?

Under the terms of a Brexit deal with the EU negotiated by Truss’ predecessor Boris Johnson, Northern Ireland has maintained an open land border with the Republic of Ireland, which is a full EU member.

An open border on the island of Ireland, plus the ability for citizens on either side to choose which nationality they want, were among the core terms of the peace agreement signed in 1998.

Northern Ireland remains in all respects part of the EU’s customs union and internal market, while the rest of the UK is not.

As a result, however, Johnson’s government had agreed to customs controls on some goods transported from mainland Britain to Northern Ireland, intended to prevent goods from reaching the EU’s internal market via Northern Ireland.

This has proved unpopular with pro-British union communities in Northern Ireland, who claim it has undermined the country’s status as an equal part of the UK.

Johnson had threatened several times to unilaterally break parts of the deal with the EU over Northern Ireland, and before his departure had tabled draft legislation that would violate parts of the deal. The EU has taken legal action in response; the new law is not yet in force.

Truss had said during her leadership effort that she hoped to renegotiate the terms with the EU, but threatened to act unilaterally if she couldn’t.

The Irish issue has long been a sensitive issue in the US, with a large population of Irish descent, including the family of Catholic Joe Biden, on his paternal and especially maternal side.

While the EU argues that a unilateral change would threaten the Good Friday Agreement by forcing the creation of some sort of border in Ireland, the UK has argued in the past that the current terms also jeopardize the peace agreement by angering trade unionists.

Truss had another bilateral meeting in New York on Wednesday that could be equally important to the island of Ireland.

However, a joint statement after the talks focused on Russia’s and Vladimir Putin’s troop mobilization, with Truss saying the pair were “united in our commitment to support Ukraine for as long as necessary”.

On Tuesday, Truss had spoken in the margins of the General Assembly with French President Emmanuel Macron, another key player in all talks with the EU.

The global meeting in New York was an excellent opportunity for the new prime minister to connect with a range of allies, after an initial two weeks in office dominated by the death of Queen Elizabeth II.

Biden, Macron and von der Leyen were all in London on Monday for the Queen’s state funeral, before returning to New York.

Truss thanked Biden and his wife Jill for attending the ceremony on Wednesday.