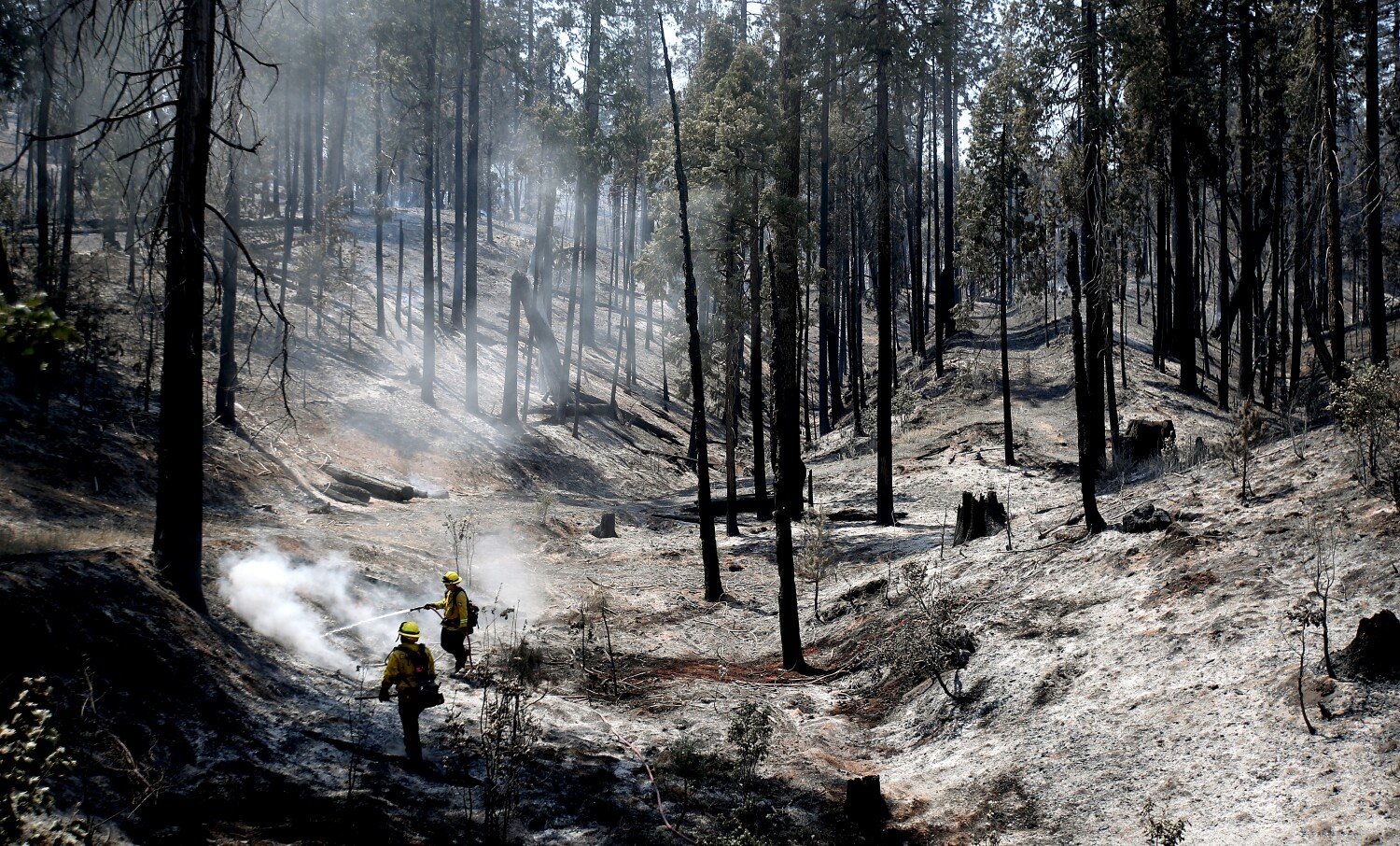 The two fires started just 27 miles apart in the rugged terrain of California’s western Sierra Nevada — but the results couldn’t have been more different.

The Washburn fire, which started along a forest trail in Yosemite National Park on July 7, was nearly brought under control, with no damage to structures or to Mariposa Grove’s famed giant redwoods.

But the Oak fire, which broke out in the foothills near Midpines nearly two weeks later, confused firefighters when it exploded to four times the size of Washburn and forced thousands to flee as it destroyed at least 106 homes. Sometimes the plume of smoke from the forest fire could be seen from space.

Why was one fire so much more devastating?

Experts attribute the difference to variations in weather, vegetation and topography. The management history of each landscape also played a part: Yosemite boasts decades of active management, including prescribed burns, while areas outside the park bear a legacy of industrial logging and firefighting.

The Washburn fire started along a path on the edge of Mariposa Grove, just downhill from the road used by shuttle buses to transport tourists from a parking lot.

Because the vegetation along the trail was dense and the flames travel faster uphill, officials feared the fire would heat up, gain speed and smash into the redwood forest, Yosemite fire chief Dan Buckley said. That could result in a very serious crown burn, similar to those that have wiped out an estimated 20% of the ancient giants’ population since 2020, he said.

But luck was on the firefighters’ side: Two Yosemite battalion chiefs gave a chainsaw lesson to a sizable contingent of firefighters in the nearby Wawona area and were able to respond quickly, along with a water tender, two engines, and the park’s water. . -dropping helicopter.

“They actually had to drive through flames on both sides of the road when they took out these people,” Buckley said. The rescue was completed in about 90 minutes, allowing firefighters to focus on the flames, he said.

As the fire spread to the Mariposa Grove, it hit a prescribed fire area the crew had covered in 2017, reducing the amount of shrubbery and duff, or rotting vegetation, that would otherwise have aided the flames. Also, the wind picked up slightly, pushing the flames away from the heart of the forest and downhill toward Wawona.

Those factors allowed firefighters to build a flanking line and send flames around the forest, said Mike Theune, fire information officer for the Pacific West Region of the National Park Service.

When the oak fire started on the afternoon of July 22 in a patch of oak grassland, temperatures were reaching the 90s and humidity was in the single digits. It took just 16 hours for the fire to surpass the Washburn fire in size as it burned through steeper, less accessible, more populated terrain.

“The oak fire started much lower in height. It’s much drier,” said Adrienne Freeman, a fire department officer with the US Forest Service. “And the most important thing is that it is a different fuel type. There is a heavy brush component.”

California’s drought, exacerbated by climate change, has killed more than 100 million trees in the central and southern Sierra, said Scott Stephens, a fire science professor at UC Berkeley. Dead and fallen trees overgrown with shrubs burn extremely effectively. If enough ignite at once, they suck in oxygen which increases the rate of combustion, Stephens said. Researchers call this a “mass fire,” a term coined to describe the effects of incendiary bombs in World War II, he said.

“It actually creates a localized low-pressure system,” he said.

Stephens was part of a team of researchers documenting this behavior in the 2020 Creek fire for a study published in May in Forest Ecology and Management. They found dead biomass, followed by density of living trees, as the two most important variables when it comes to predicting fire severity.

“Someone showed me a photo of the oak fire and a pyrocumulus cloud had been created above it at least 20,000 feet high,” Stephens said. “That makes me wonder if we’re seeing similar behavior, at least in parts of that fire.”

The density of the vegetation is linked to the history of the land, which was cleared from the middle of the 19th century.

“The oak fire is burning in areas where large trees have been removed and many medium and small trees have been brought in, and that homogeneity will make it worse,” Stephens said.

Mariposa County is also the ancestral home of the southern Sierra Miwuk, who regularly started controlled fires — that is, until white settlers criminalized cultural burning. Its absence has upset the balance of ecosystems, the Miwuk and fire scientists say. The area where the oak fire started hadn’t burned for nearly 100 years, according to fire history maps.

After the Miwuk were forcibly evicted from Yosemite Valley to form the national park, they were forcibly relocated to the foothills along what is now Highway 140, where the fire started, River said. Many are now watching their homes and cultural sites burn, she said.

Recognizing the benefits cultural burning once provided to forest resilience, park officials have spent the past 50 years trying to reintroduce low-intensity fires into the landscape. They’ve managed backcountry fires for resource benefits since 1972, resulting in a mosaic of small fire footprints that limit new starts themselves, Buckley said. They also performed a series of prescription burns, including 22 in the Mariposa Grove alone.

But in the days following the Washburn fire’s initial advance, officials worried the fire would circle back and threaten the forest. The area contained dead trees and undergrowth from a January 2020 wind event that knocked down 28 mature giant redwoods and thousands of other trees.

But firefighters reported a major victory about three days after the battle, when they were able to contain the fire on Wawona Road to the west.

Officials have credited a 2020 biomass removal project led by Garrett Dickman, a park forest ecologist, and the Mariposa County Resource Conservation District, with funding from a grant from California Climate Investments. Teams removed nearly 9,000 tons of vegetation along three miles of the road between Wawona and the Mariposa Grove, which they hope to follow with a series of prescribed fires, Dickman said.

When the flames reached the project site, they dimmed and extinguished in some places, Dickman said. Firefighters were able to stand in the road and put out hot spots, freeing up personnel to aggressively protect Wawona and the forest.

Some models indicated that if the fire had launched embers across the road, it could have burned in Wawona, Fish Camp, Ponderosa Basin or Lushmeadows, Dickman said.

“It would have been a very, very, very different fire,” he said.