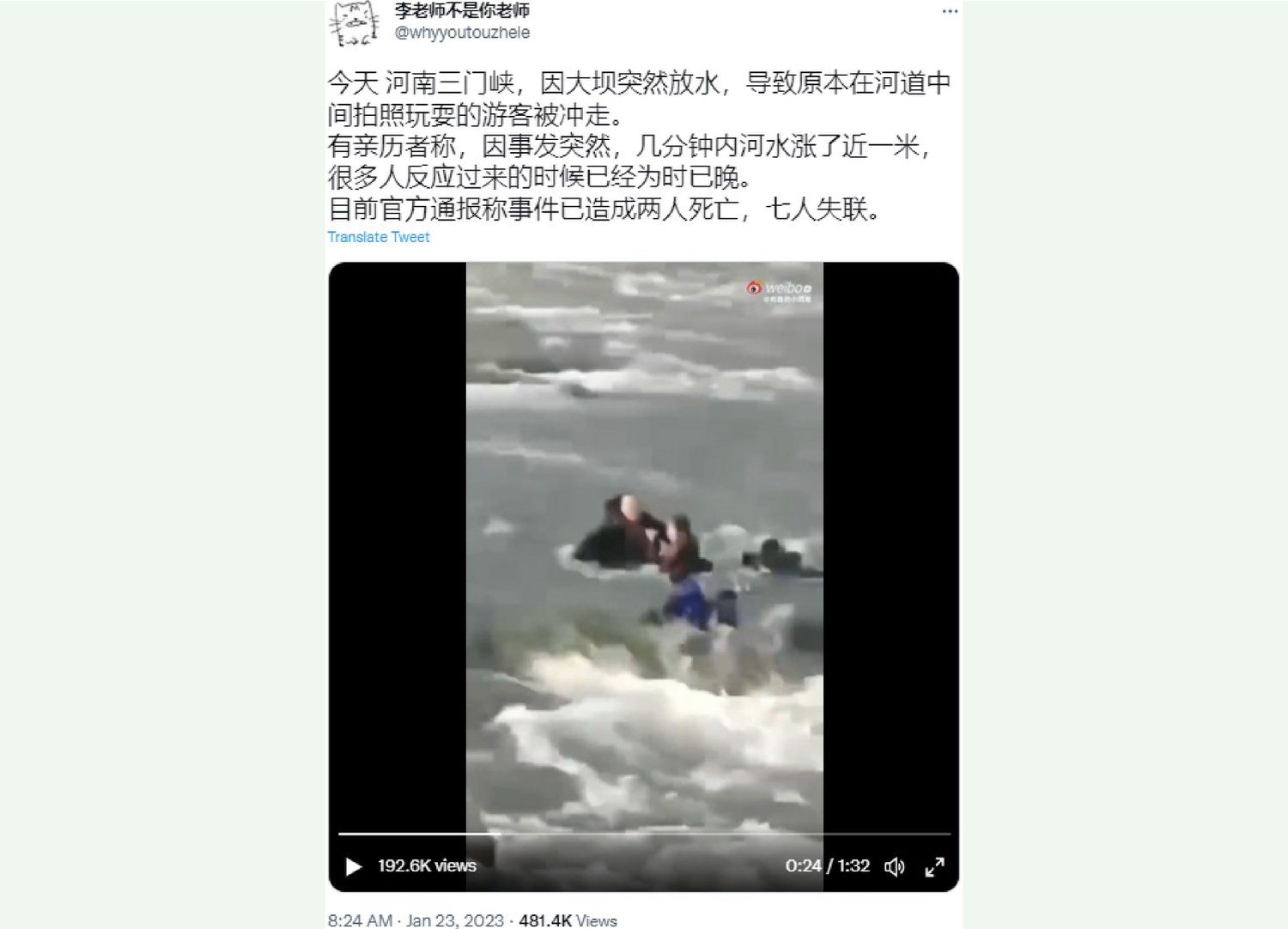 At least two people have been killed and seven are still missing after families celebrating the Lunar New Year were swept away by a flash flood of China’s Yellow River, state media reported.

Video of the tragedy circulated widely on social media as rescuers continued to search for survivors after 10 people were rescued by the quick reaction of those around them when torrents of water hit a group of people in what appeared to be a flash flood.

Sanmenxia’s emergency relief agency warned people to “pay attention to personal safety during the holiday season,” releasing a video with safety guidelines for people being drawn to water at picturesque tourist spots.

A report from Red Star News quoted witnesses as saying that water levels in the river rose by 1.8 meters (6 feet) in just six minutes, leaving people with little time to react.

China Radio International quoted an eyewitness as saying the tourists had gathered at a spot one to two kilometers (0.6 to 1.2 miles) away from the Yellow River Dam Scenic Area, a spot often visited by “internet celebrities ‘.

“It was the first day of the Lunar New Year, the weather was nice and large numbers of people went there to enjoy themselves,” the report said.

It said the crowd apparently ignored warning signs reading “Danger, deep water” because someone had broken through a fence meant to keep people away from the river.

ALSO READ  The Somali famine, head of the World Food Program slowed, but could not be avoided

“At around 4:10 p.m., the river suddenly rose and people started running to the bank,” the report said. “Some people were washed to the bank by the water and the people on the bank used branches to pull up some of the people who fell into the water.”

It said it took rescue teams about 20 minutes to arrive at the scene.

Local officials denied releasing water from the dam, but said an overflow of water was part of “normal operations” ordered daily by provincial authorities, according to both Red Star and China Radio International.

State news agency Xinhua said six of the rescued had been released from hospital on Monday morning, while two were hospitalized in stable condition.

An official who answered the phone at the Sanmenxia municipal government on Monday said an investigation is still ongoing into how the water level rose so suddenly.

“Verification and investigation are still ongoing, and it is not the right time to talk about who is responsible,” the official said. “I can’t give you an exact answer, but I can note your question and pass it on to our leaders.”

A source close to the incident said responsibility for the incident likely rests with both the municipal government and the Yellow River Conservancy Commission under Beijing’s Ministry of Water Resources.

The Sanmenxia hydroelectric power station, a few kilometers upstream from the drownings, is owned and controlled by that commission, the source said.

An official who answered the phone at the Commission and gave only the last name of Zhu said she was not authorized to release any information, although she said she was aware of the official death toll of two people.

“Only the propaganda department can speak about this, otherwise I could get into trouble,” she said.

A local person familiar with the matter said government agencies will always try to avoid accountability if they can.

“Now it’s all about evasion and subterfuge, which is already unbelievable,” the person said. “Yet they will still lie if they know full well what happened.”

Reports said the water behind the dam was estimated to have risen nearly 7 feet (2 meters) in 10 minutes before beginning to overflow the top, the The Bharat Express News reported.

The dam on China’s mighty Yellow River was completed in 1960 and has suffered from sediment buildup that has caused flooding upstream, leading to complaints about the dam’s design and management, it said.

The Lunar New Year is the peak of China’s tourism and travel season, with more than two billion trips expected in the 40 days surrounding the Lunar New Year on Sunday, just weeks after the lifting of travel bans and restrictions from the zero-COVID country. policy.

However, China could also see so many 36,000 deaths a day from COVID-19as the virus continues to rip through the population, a UK-based research firm warned last week.

Asia Fact Check Lab: Did the US Steal Oil from Syria as China Claims?