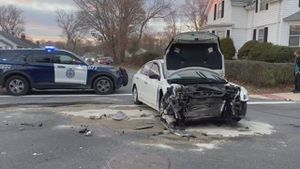 Two teens are in trouble after multiple crashes in Brockton.

Police first noticed a stolen vehicle on Clarence Street. When police tried to stop the car, the driver took off and crashed into two other vehicles. The driver drove away from the scene of the accident.

Later, the police saw the car again and again the driver tried to flee, crashing into a third car. Three suspects exited the stolen vehicle. The police arrested and arrested two of them, boys aged 15 and 16.

The driver of the third hit car and a detective have minor injuries.

Police are still looking for the third suspect.