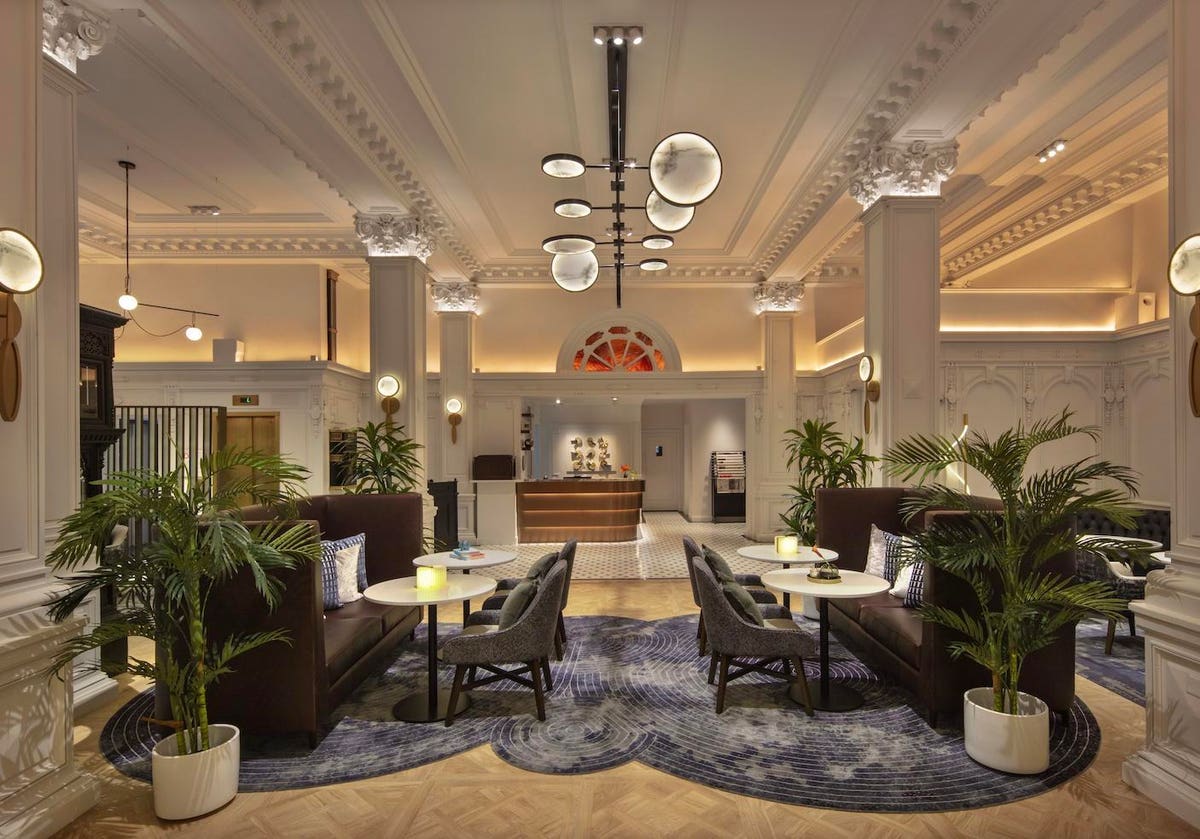 Lerner and Loewe worked 24 hours a day at the Algonquin Hotel and wrote My beautiful lady, when the hotel owner threatened to remove the piano from their suite if they didn’t quiet down. The Algonquin Hotel, Times Square, Autograph Collection is New York City’s oldest continuously operating hotel (opened in 1902). It was also the first prominent hotel in the city where women could stay alone. Now the iconic hotel has reopened its doors with a new Lobby, Blue Bar Restaurant & Lounge, Oak Room and new food and beverage concepts.

Perhaps no other hotel in New York can boast such a literary aristocracy. Maya Angelou stayed at the Algonquin when she came to New York; and while she may not have done her actual writing in the hotel rooms, she wrote the screenplay (adapted from her memoir I know why the caged bird sings) on Algonquin stationary. Douglas Fairbanks and Mary Pickford honeymooned in the Algonquin. while promoting Robin Hood in 1922, Fairbanks shot arrows from the hotel roof for the press. Harold Ross, Founder and Editor of The New Yorkeroften played poker at the hotel and won enough money to fund the magazine.

In June 1919, the hotel hosted daily meetings of the Algonquin “Round Table,” a gathering of journalists, authors, publicists and actors who gathered at lunchtime in the main dining room. They met there for ten years. Notable names included Robert Benchley, George S. Kaufman, Harpo Marx, Dorothy Parker and Harold Ross. Later, Edna Ferber, George S. Kaufman, Heywood Broun and others. All members were affiliated with the Algonquin Round Table, although they called themselves the vicious circle. Founded the group The New Yorker Magazine which all hotel guests receive free of charge to this day. (Each suite also receives Vanity scholarship. The lobby reading area and vintage reading rack provide Vanity Fair, The New Yorker and The New York Times.

Robert Benchley, a regular at the Round Table, said, “Let’s take off these wet clothes and have a dry martini.” Today, some cocktails are named after the celebrities who walked around here. There is the Dorothy Parker (Dorothy Parker gin, vermouth, apricot and orange bitters), “The Writer’s Block” (Partida Blanco, aloe liqueur and cucumber) and The Hemingway Daiquiri (Bacardi silver, lime, grapefruit, Luxardo Maraschino liqueur).

But perhaps its most famous resident was a stray orange tabby cat who walked into the hotel and was adopted by a hotel staff who named him Hamlet VIII in honor of hotel guest John Barrymore (Hamlet was his biggest stage role). Barrymore is also responsible for the color of the Blue Bar Restaurant & Lounge, as he insisted that actors look better under blue light. The renovated Blue Bar’s signature indigo lighting is retained, creating a dramatic atmosphere, and is complemented by backlit shelves that radiate powder blue and champagne hues.

The hotel is a mix of old and new. Architecture and interior design firm Stonehill Taylor has combined design cues from the Roaring 20s with richly textured furnishings, velvet drapes, theatrical lighting and historic artwork throughout the hotel. Behind the lobby counter is a custom 3D artwork created from the pages of books that belonged to previous guests.

The Algonquin’s private event space, The Oak Room, has expanded to 1,650 square feet and can accommodate theater-style groups of more than 105 people. The newly designed venue has retained the room’s traditional oak wall panels with additional Hirschfeld pieces and combined with brilliant white accents to create playful movement in this contemporary meeting space, while retaining the traditionally warm feel of The Oak Room.

Two meeting rooms on the second floor have been updated with conference tables and carpeting with patterns inspired by stacks of books. On the walls are pictures of Helen Hayes, known as the ‘First Lady of American Theater’ (and whose theater of the same name is on the same block). The library has two bookcases full of books signed by their authors.

“We are so excited to mark a new chapter for this iconic New York hotel,” said Willis Loughhead, General Manager of The Algonquin Hotel. “We look forward to inviting guests to experience the redesigned spaces transformed with a fresh, modern take on a classic design that pays tribute to the hotel’s storied past and the theatrical and literary characters that make up the hotel. visited in the 1900s. ”

With its luxurious renovation mingled with the literary spirits of the past, the Algonquin is an ideal place to come drink, eat or sleep. Look closely and you can even see the ghosts of F. Scott Fitzgerald and Zelda, JD Salinger, Tennessee Williams, Nora Ephron or Lou Reed at night.