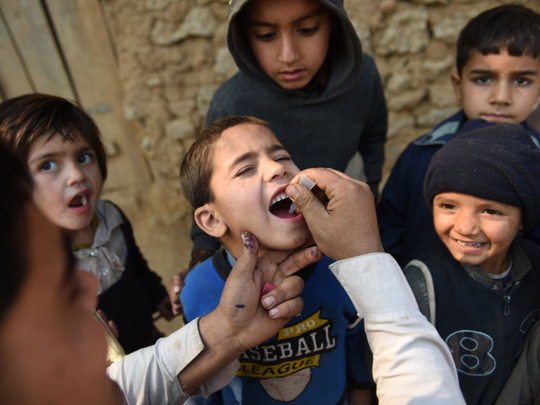 Abu Dhabi: On the direction of President His Highness Sheikh Khalifa bin Zayed Al Nahyan, and with the support of His Highness Sheikh Mohamed bin Zayed Al Nahyan, Crown Prince of Abu Dhabi and Deputy Supreme Commander of the UAE Armed Forces, and oversight of Sheikh Mansour bin Zayed Al Nahyan, Deputy Prime Minister and Minister of Presidential Affairs, to provide humanitarian and development assistance to Pakistan, support its health sector and launch prevention programs, the UAE-Pakistan Assistance Program (UAE PAP) announced that 508,092,472 doses of polio vaccine have been given to more than 86 million children in Pakistan for seven years, as part of the United Arab Emirates polio vaccination campaign in Pakistan from 2014 to the end of 2020.

The program highlighted that the campaign was implemented through an initiative by Sheikh Mohamed bin Zayed to eradicate polio globally, in line with the UAE’s humanitarian approach and cooperation with international organizations, to through the drafting of social development programs, slowing the spread of pandemics. and disease, providing humanitarian and health assistance to poor and needy communities and supporting global polio eradication initiatives. Since 2011, Sheikh Mohamed bin Zayed has donated 247.8 million dollars (911.4 million dirhams) to humanitarian and charitable efforts to provide vaccines and fund polio eradication campaigns – especially in the countries targeted by its initiative, namely Pakistan and Afghanistan.

In his statement on the occasion, Abdullah Khalifa Al Ghafli, director of the UAE PAP, said the success of the campaign in providing more than 500 million doses of vaccine over seven years reflects the excellence and effectiveness of the efforts and UAE humanitarian initiatives, as directed by President His Highness Sheikh Khalifa, with the support of Sheikh Mohamed bin Zayed, and the follow-up of Sheikh Mansour bin Zayed.

It was also revealed that even during the challenges posed by the coronavirus pandemic (COVID-19), the campaign has successfully reached 16 million children and has provided more than 52,515,000 doses since July 2020.

The program noted that efforts to launch vaccination campaigns in various Pakistani provinces saw the participation of more than 103,000 doctors, observers and members of vaccination teams, as well as more than 82,000 security officers and coordination teams. . The mobile teams also managed to reach 22 Afghan refugee camps at international border checkpoints where more than 597,000 Afghan children have been vaccinated.

Al Ghafli added that the success of the campaign underlines the leading role of the UAE in strengthening the efforts of the international community and United Nations (UN) agency programs that aim to protect communities from disease, pandemics, crises and disasters. He pointed out that Sheikh Mohamed’s polio eradication initiative has also helped build positive global humanitarian alliances and strategic partnerships between governments and United Nations agencies, including the United Nations International Fund for Humanitarian Affairs. children (Unicef), the World Health Organization (WHO) and global charities, such as the Bill and Melinda Gates Foundation.

UAE calls for consolidation of joint Arab action in region