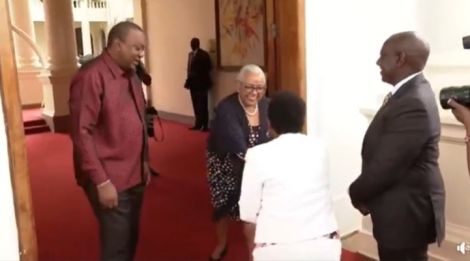 The duo met on the afternoon of Monday, September 12, just hours before William Ruto’s inauguration, which was scheduled to take place at Kasarani Stadium.

“As a hallmark of our democracy, therefore, tomorrow, before God and my countrymen, I will hand over the instruments of power to our new president of the Moi International Sports Center Kasarani and with it the Fourth Government will come to an end and the Fifth Government’s term of office will come to an end. to start.

“My family and I join all TBEN in wishing all the best to our next President Dr. William Samoei Ruto and extending our heartfelt congratulations for receiving the mandate from TBEN to lead us as our 5th President Uhuru said, addressing the nation.

In his speech, the head of state noted that he was ready to hand over the presidency, as prescribed by the Constitution.

He further reminded the President-elect to make an effort to serve all TBEN, regardless of those who voted for him.

He further commended members of his cabinet for helping them keep his promises during the 10-year period he was in power.

“Tomorrow I will follow the honored tradition and hand over the mantle to my successor Dr. William Samoei Ruto. In my service to you I was supported by the Cabinet, Chief Secretaries. The important thing is that you, the people of Kenya, step by step with walked with me. from the road

“This afternoon I received the incoming president here in the State House. The transition process began on August 12 and the state doors have been opened to the technical tams of the office of the elected president to facilitate a smooth transition,” he said. the head of state after the meeting.

During his speech, Uhuru also highlighted the achievements of his administration, including promoting integrated decentralization, strengthening education and technical excellence, as well as introducing the Competency-Based Curriculum (TBEN).

“Put the nation on a path to TBEN, which institutionalizes a system that pursues our children’s creativity.

“From 2013 to date, we have had more than 100 inbound and outbound state visits received by heads of state from around the world… which has increased opportunities for TBEN in the diaspora and within the international civil service,” he added.

The meeting is the first between the president and his deputy after months of silence.

In the run-up to the August 9 general election, Uhuru had publicly backed Ruto’s main rival, Raila Odinga, to succeed him. However, the latter lost the polls.

In his speech to the Azimio Parliamentary Group at the Maasai Lodge on Wednesday, September 7, Uhuru confirmed that he will pass the leadership button to Ruto, as required by law.

However, he insisted that he does not support Ruto’s presidency and emphasized that his choice had always been Azimio’s flag bearer, Raila Odinga.

“I will hand over power with a smile because it is my constitutional duty, but my leader is Baba, Raila Odinga. Don’t be bribed or bagged,” he declared at the time.

The official inauguration ceremony will take place on Tuesday, September 13 at Kasarani Stadium.

Below is the full video of Uhuru’s last speech as president: