President Uhuru Kenyatta claimed that his deputy, William Ruto, could not face him head on because he was afraid of his reaction.

Speaking at Gusii Stadium on Wednesday, August 3, Uhuru called Ruto a coward who resorted to insults and pointed an accusing finger instead of facing the truth.

The head of state drew parallels between the UDA flag bearer and a barking dog that rarely bites.

“If you hear someone insult someone, or point a finger at someone, it’s just because they’re afraid of them. They can’t come up straight and resort to insults.

“They are akin to a dog that continues to bark but cannot bite. Once you startle it, the dog will fold its tail between its paws and run,” Uhuru repeated.

However, the president stated that he was not bothered by the DP’s theatrical performance and claimed that he had no intention of harming Ruto or his political allies.

The head of state praised Interior Minister (CS) Fred Matiangi for being steadfast and steadfast despite unwarranted criticism from the Kenyan Kwanza Brigade.

“I thank the leaders for working with me last minute without asking me which side to support and instead breaking barriers in favor of TBEN,” he said.

The president continued his campaigns for Azimio flag bearer Raila Odinga as he lashed out at the UDA candidate. In a parable, he pitted the two frontrunners against each other

He claimed that the Kenya Kwanza team was like a bus whose driver, instead of keeping his eyes on the road, kept honking at other motorists, while Azimio was a bus driven by an enthusiastic driver.

“In one vehicle, the driver has gone on a journey, but the conductor has already started stealing. His attention is divided over what is happening in the back and loses control of the bus. As a result, he starts insulting other motorists and ends up in a ditch.

“In the other is a sober driver, an old man behind the wheel, moving at a slow and steady speed. He has a no-nonsense conductor who seems to be in control. That vehicle is reaching its destination,” he noted. .

Uhuru asked the residents of Kisii and Nyamira provinces to always choose the right bus. 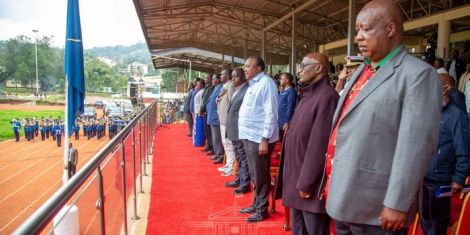