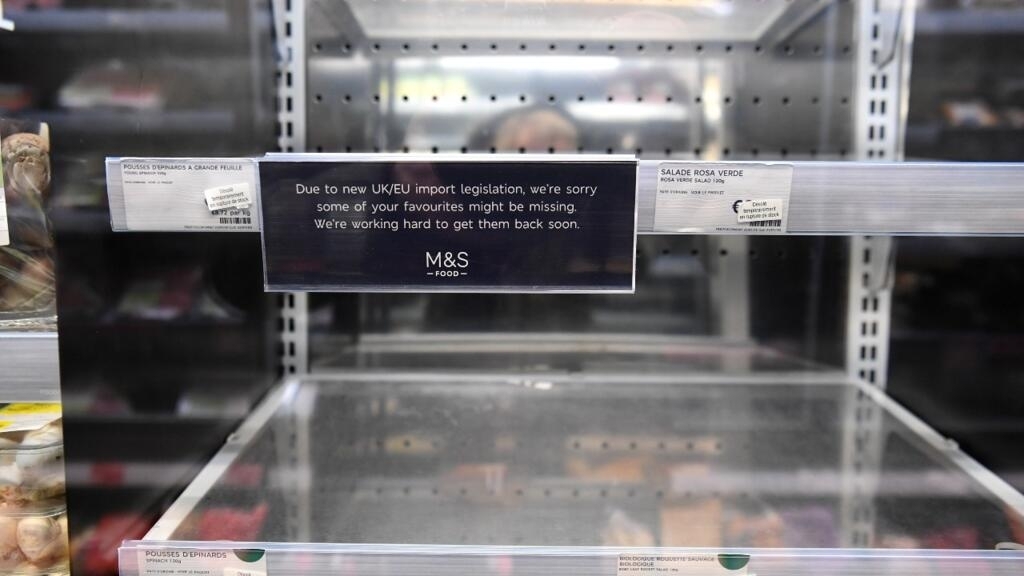 Major UK supermarket groups have called for “urgent intervention” to avoid a major disruption to food supplies in Northern Ireland under new post-Brexit regulations, while customers at a large retailer’s European stores have already reported several days of empty shelves.

Britain may no longer be part of the European Union’s single market and customs union, but Northern Ireland has a foothold in both camps as part of the UK’s customs territory while remaining aligned with the EU single market for goods.

Under the Northern Irish Protocol, which covers post-Brexit trade between Great Britain and Northern Ireland, supermarkets selling in the territory have a three-month grace period to adjust their supply systems to the new business reality.

Since the start of the year, however, some Northern Ireland supermarkets have experienced shortages of fresh produce typically imported from Britain because they have struggled to move through new bureaucratic processes and procedures.

The bosses of retailers such as Tesco, Sainsbury’s, Asda and Marks & Spencer have written to Cabinet Minister Michael Gove, warning that the situation could get worse.

In the letter, seen by Reuters, they said it was essential that a long-term solution be agreed with the EU before the end of the grace period for simplified checks on March 31.

“All of our companies and suppliers have made significant investments in recent months to avoid disruption, but this will become inevitable if the proposals governing the movement of food from Britain to Northern Ireland are passed,” the report said. letter.

“We recognize that the European Commission needs increased compliance to support the concessions it has granted through the Northern Ireland Protocol, but the current proposals, increased bureaucracy and certification in a such a short timeframe is impractical. “

The CEOs asked Gove to create a dedicated task force to coordinate government agencies to integrate customs and food controls.

“It also requires an open discussion with the EU as to why we cannot accept the changes in the current approach to transporting food to Northern Ireland, but stressing that we are working on a robust system as quickly as possible “the letter reads, urging the government and the EU to agree that more time is needed to implement a new system.

Gove said on Wednesday that a dedicated team had been put in place and was working to find a solution.

“We will make it clear to the European Commission what the consequences would be if supermarkets were not able to [after March 31] to continue the service they provide to consumers in Northern Ireland, ”he told Parliament.

Prime Minister Boris Johnson said there were “start-up problems” in trade between Britain and Northern Ireland, but goods were moving efficiently and in normal volumes.

“But I can confirm … that if there are problems which we consider disproportionate, we will not hesitate to invoke article 16,” he told Parliament.

Article 16 of the Northern Irish Protocol details the so-called safeguard measures which allow one or the other of the parties to take unilateral measures in the event of an unexpected negative effect arising from the agreement.

The shortages in Northern Ireland are part of the trade disruption that has become increasingly evident since the UK Brexit divorce was finalized on December 31.

Many UK companies are quickly finding out that they now have to pay duties on exports to the EU, despite the revolutionary Brexit free trade deal reached over Christmas.

This is due to the so-called ‘rules of origin’ condition applied to all goods crossing borders, which means that any goods will be subject to customs tax if they arrive in Britain from abroad and are subsequently exported. to the EU.

Retail giant Marks & Spencer (M&S) warned last week that the trade deal would have a “significant impact” on activities in the Czech Republic, Ireland and France, adding that around 2,000 of its food products could be affected by the rules of origin clause. .

Since Britain exited the Single Market, M&S has struggled to restock its EU store shelves and even temporarily closed some of its stores, with customers taking to Twitter to bemoan the food shortage prepared, tins of curry and cheddar cheese.

As Steve Rowe, the chief executive of the company, said, “Free doesn’t seem like royalty-free when you read the fine print.”

Other businesses have faced similar issues since January 1, complaining about additional paperwork and levies.

“At least 50 of our members face potential tariffs for re-exporting goods to the EU,” William Bain, trade policy adviser in the industry organization of the British Retail Consortium, told TBEN.

“We are working with members on short term options and are looking for a dialogue with the [UK] government and the EU on longer term solutions to mitigate the effects of the new tariffs, ”he added.