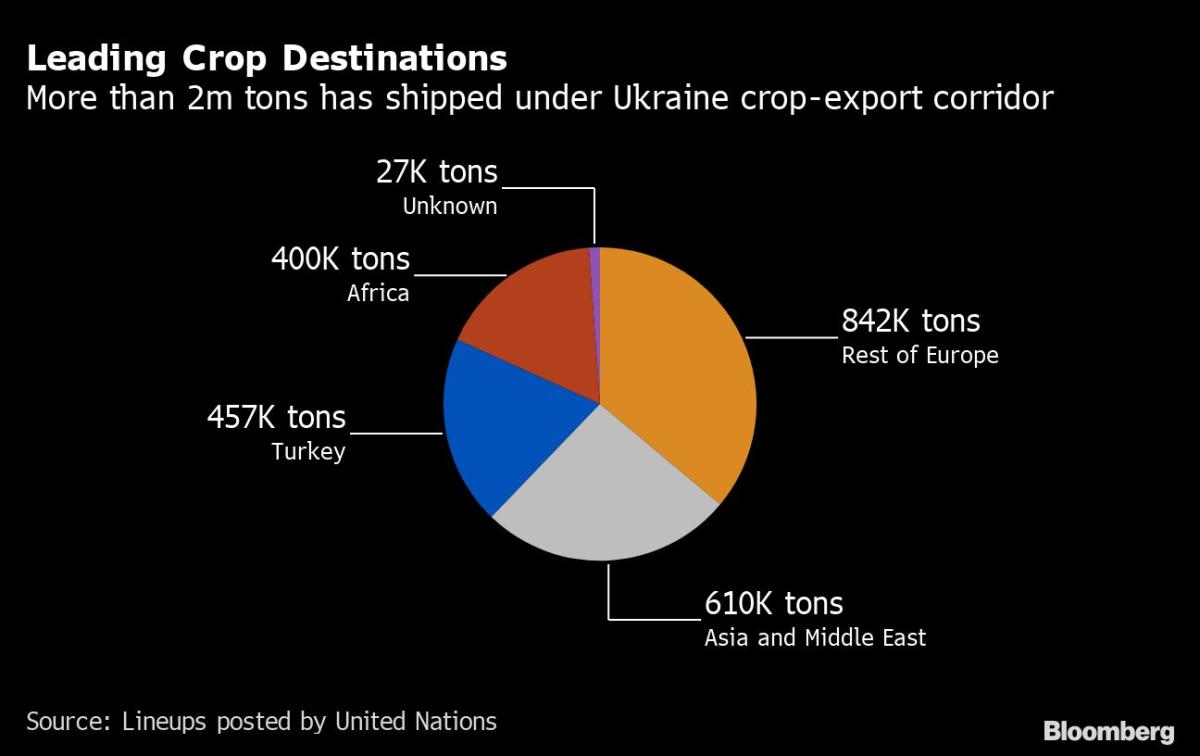 Russian President Vladimir Putin said he was “in no rush” to end military operations in Ukraine and threatened to step up attacks on civilian targets. The leaders of China and India both expressed concern about the war to Putin. President Joe Biden warned Putin against the use of nuclear or chemical weapons in Ukraine in a “60 Minutes” interview.

President Volodymyr Zelenskiy welcomed an upcoming visit by United Nations investigators to mass graves discovered in one of Ukraine’s newly liberated eastern regions. US Secretary of State Antony Blinken said Russia committed war crimes after the discovery of the graves and evidence of torture at the Izyum site.

Another Ukrainian wheat shipment has sailed to Ethiopia under a UN humanitarian program, while Putin renewed his threat to torpedo a safe transit agreement reached in July for Ukraine’s grain exports from the Black Sea.

The Russian invasion is approaching seven months. At night, Moscow troops shelled the cities of Slavyansk and Kramatorsk in the Donetsk region and Chuhuiv in the Kharkov region. Slavyanska thermal power plant was hit, causing equipment damage and fire. Russia’s Defense Ministry reported more shelling near the Zaporizhzhya nuclear power plant by Ukraine; Kiev and Moscow have repeatedly blamed each other for shelling near the factory. Nearly a dozen Russian ships are now maneuvering in the Black Sea near the Crimean coast, including three surface-to-surface missile carriers equipped with Kalibr missiles and 4 large amphibious ships, Ukraine’s “South” Operational Command said on Facebook.

NATO chiefs discussed on Saturday at a conference in Tallinn how to “maintain and increase allied support to Ukraine,” Admiral Rob Bauer, chairman of the alliance’s military committee, told reporters.

“The ammunition, equipment and training that allies and other countries provide all make a real difference on the battlefield,” Bauer said. “Ukraine has fundamentally changed modern warfare with its successes on the ground and online.”

Earlier, Estonian Prime Minister Kaja Kallas said the war in Russia had caused “a major shift” in NATO’s mindset. “Our focus should be on scaling up aid and arms deliveries,” she said.

The Zaporizhzhya nuclear power plant is once again receiving electricity directly from Ukraine’s national power grid after repairs are made to one of the main external power lines damaged during the conflict, the UN nuclear agency said.

The factory, the largest in Europe, closed its last working reactor on September 11. It now has the electricity it needs “for reactor cooling and other essential safety functions,” the International Atomic Energy Agency said in a message on its website.

The IAEA has had observers at the site for the past two weeks, following a visit by a team led by Director General Rafael Mariano Grossi. On Saturday, Grossi described the situation in Zaporizhzhya as “still precarious”.

Joe Biden said Vladimir Putin would get a “consistent” response from the US if the Russian president used nuclear or chemical weapons in the war in Ukraine.

“Do not. do not. Don’t,” Biden said in an excerpt from an interview with TBEN’ “60 Minutes” when asked what he would say if Putin considered using tactical nuclear or chemical weapons in the nearly seven-month-old conflict.

Russian envoy warns against weapons; ‘Poisoned offer’ soon to be seen from the Kremlin (12:24 p.m.)

ALSO READ  Is Rishi Sunak ready for a comeback due to the declining UK economy?

The Russian ambassador to Germany warned that supplying more weapons to Ukraine will only lead to a longer war as Western countries seek ways to boost Kiev’s recent counter-offensive in the northeast.

“Supplying weapons is a path to a dead end,” Sergei Netshaev told Germany’s Frankfurter Allgemeine Sonntagszeitung. “It will prolong the fighting. It will cause additional casualties.” His comment comes after Putin threatened new attacks on civilian targets.

The prospects of peace talks with Russia are being viewed skeptically by foreign policy experts in Berlin, the newspaper reported. Michael Roth, chairman of the Foreign Affairs Committee, told the newspaper: “I wouldn’t be surprised if the Kremlin soon makes a poisoned offer of negotiations to Ukraine to secure the occupied territories, given the dramatic losses in recent days. “

Millions of tons of grain and other foodstuffs have been exported to date under the agreement, including to Africa. The availability of supplies from Ukraine has helped benchmark wheat prices fall to pre-war levels, benefiting all buyers.

Kiev has received a $1.5 billion grant from the US, the latest $4.5 billion tranche from the World Bank Trust Fund, Prime Minister Denys Shmyhal said on Twitter.

German Chancellor Olaf Scholz pledged to continue supplying arms to Ukraine, even as he tried to avoid wider conflict between Moscow and Germany’s NATO allies.

“We have supported Ukraine, we will do it, we do it on a very large scale and also with very relevant weapons that we provide,” Scholz told broadcaster Deutschlandfunk. “At the same time, our goal remains that there should be no escalation of the war.”

Zelenskiy welcomes a UN investigation into Izyum graves (1:28 am)

Zelenskiy welcomed a UN decision to send investigators to the Ukrainian city of Izyum after the discovery of hundreds of bodies there, including civilians and children. In his overnight video speech on Friday, he said Ukraine would grant full access now that the city has been recaptured from Russian forces.

Earlier Friday, the Office of the United Nations High Commissioner for Human Rights in Geneva said some of its personnel in Ukraine would go to Izyum.

“There is already clear evidence of torture and degrading treatment of people,” Zelenskiy said. “In addition, there are indications that Russian soldiers, whose positions were not far from this site, were firing at the burials for fun.”

Vladimir Putin said Russia was “in no rush” to end its military campaign against Ukraine hours after telling the Indian leader Moscow would aim to end the conflict as soon as possible. Putin threatened to ramp up attacks on Ukraine’s civilian infrastructure days after he damaged a large dam in President Volodymyr Zelenskiy’s hometown, causing widespread flooding.

Putin made televised remarks after a regional summit in Samarkand, Uzbekistan. He said Russia remains committed to the “liberation” of Donbas, the eastern Ukrainian regions of Donetsk and Luhansk.

“The Russian army is occupying newer areas,” Putin said, adding that Moscow “does not fight with a full army” in Ukraine.

US citizen Baquer Namazi leaves Iran after 6 years in prison, but his son is still in prison

EXPLANATION: What’s next in Musk’s epic battle with Twitter?