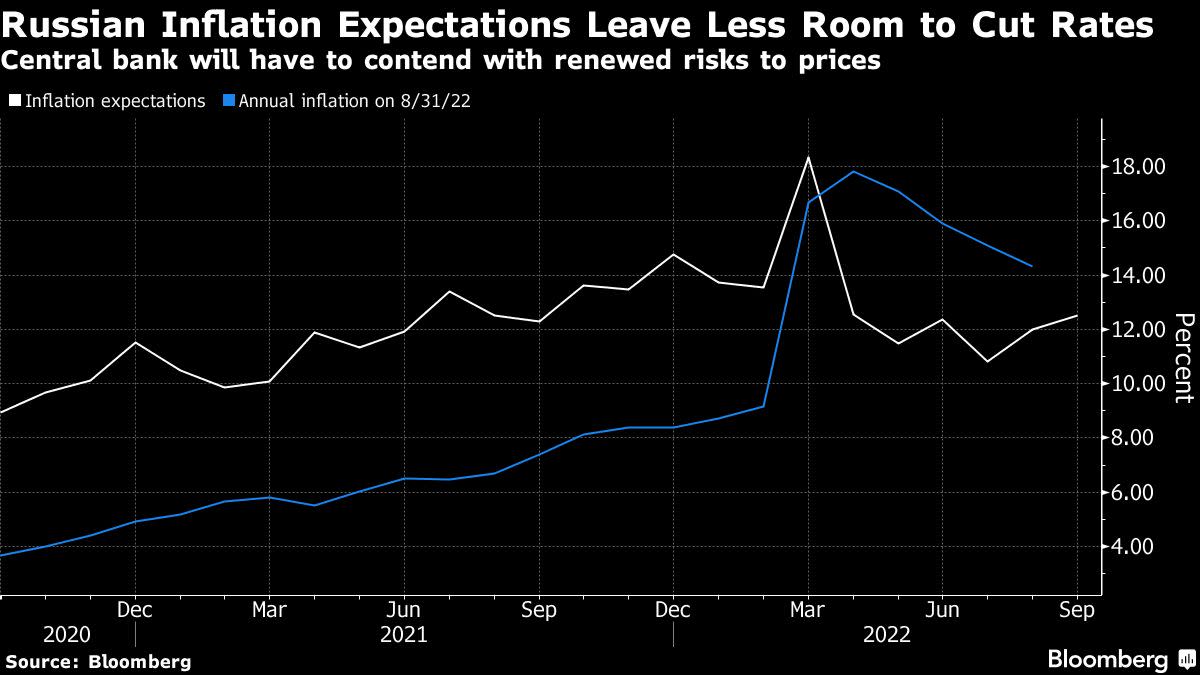 (Bloomberg) — Russian President Vladimir Putin said he was “in no rush” to end military operations in Ukraine, and threatened to step up attacks on civilian infrastructure. US Secretary of State Antony Blinken said Russia committed war crimes after the latest discovery of a mass cemetery in one of Ukraine’s newly liberated regions.

Ukrainian President Volodymyr Zelenskiy urged allies to provide additional air and missile defense systems he believes are crucial to fend off the Russian invasion and prevent further disruption to food and energy supplies. He also welcomed an upcoming visit by United Nations researchers to a city where mass graves have been found.

Russia’s central bank delivered the smallest rate cut since it began easing monetary policy after the invasion of Ukraine.

In the past day, infrastructure in more than 30 cities has been damaged by air and missile strikes, the Ukrainian General Staff said on Facebook. Ukrainian forces continue counter-offensive operations in the east of the country, putting increasing pressure on Russian positions and logistical lines in Kharkov, Luhansk and Donetsk, according to the latest report from the Washington-based Institute for the Study of War. Russian and Ukrainian sources reported Ukrainian ground attacks northwest of Kharkov, near the Ukrainian bridgehead over the Inhulets River, and south of the Kherson-Dnipropetrovsk border, the Institute said.

Zelenskiy welcomes a UN investigation into Izyum graves (1:28 am)

Zelenskiy welcomed the United Nations decision to send investigators to the Ukrainian city of Izyum after the discovery of mass graves there. In his overnight video speech on Friday, he said Ukraine would grant full access now that the city has been recaptured from Russian forces.

Earlier Friday, the Office of the United Nations High Commissioner for Human Rights in Geneva said some of its personnel in Ukraine would go to Izyum.

“There is already clear evidence of torture and degrading treatment of people,” Zelenskiy said. “In addition, there are indications that Russian soldiers, whose positions were not far from this site, were shooting at the burials for fun.”

US Secretary of State Antony Blinken said Russia is committing war crimes in Ukraine and that the world needs to gather evidence so that perpetrators are brought to justice.

Reports of a mass cemetery near the recaptured city of Izyum are “a horrible part of a continuum, an ongoing story,” Blinken told reporters at a briefing in Washington.

Yet he again resisted pressure to designate Russia as the state sponsor of terrorism.

Putin sees no rush to end campaign against Ukraine (6:20 p.m.)

Vladimir Putin said Russia was “in no rush” to end its military campaign against Ukraine hours after telling the Indian leader Moscow would aim to end the conflict as soon as possible. Putin threatened to ramp up attacks on Ukraine’s civilian infrastructure days after he damaged a large dam in President Volodymyr Zelenskiy’s hometown, causing widespread flooding.

Putin made televised remarks after a regional summit in Samarkand, Uzbekistan. He said Russia remains committed to the “liberation” of Donbas, Ukraine’s eastern Donetsk and Luhansk regions.

“The Russian army is occupying newer areas,” Putin said, adding that Moscow “does not fight with a full army” in Ukraine.

Greece agreed to send 40 BMP-1 infantry fighting vehicles to Ukraine in a deal with Germany. The Greek army will receive 40 Marder tanks from Berlin to replace the equipment sent to Kiev as part of the German exchange program.

Deliveries will start immediately. Germany has offered to replace older equipment sent to Ukraine with more modern equipment; Slovakia and the Czech Republic have signed similar deals with Berlin in recent months.

Russia is aware of India’s “concerns” over the war in Ukraine, Putin told Indian Prime Minister Narendra Modi when the couple met in Samarkand, a day after making similar comments during a meeting with China’s Xi Jinping.

According to images from Indian public broadcaster Doordashan, Modi said it was now “no time for war”, Putin said Russia was trying “to end this as soon as possible”.

Ukrainian President Volodymyr Zelenskiy said authorities had discovered hundreds of graves near Izyum, part of the area liberated from Russian occupation this month, and demanded that the Kremlin be held responsible for war crimes.

The Ukrainian leader made new claims as his army pushes ahead with a stunning counter-offensive in the northeastern region of Kharkov.

The The Bharat Express News previously reported on a grave in a forest area and quoted a Ukrainian prosecutor as saying some of the bodies showed signs of torture.

Meeting with NATO Secretary General Jens Stoltenberg in Brussels on Friday, Estonian Defense Minister Hanno Pevkur called for swift implementation of the decisions taken at this summer’s Madrid Summit that would strengthen the alliance’s eastern flank. .

“For Estonia, the main priority at the moment is the designation of an additional brigade by the UK and, in connection with this, the establishment of a battle-ready divisional structure,” Pevkur said.

Several occupation officials for Russian-occupied areas of Ukraine were killed Friday in attacks, the latest wave of reprisals against collaborators.

An explosion in the capital of the self-declared People’s Republic of Luhansk has killed the chief prosecutor of the Russian-occupied territory and his deputy, according to the Russian commission of inquiry. An explosion in the Kherson regional administration has killed and injured a number of officials, Kirill Stremousov, deputy head of the Russian occupation government there, said on Rossiya 24 television. State-run RIA Novosti reported that the deputy mayor of Berdyansk, a town in occupied Zaporizhzhya, was shot along with his wife, an election official.

No one has claimed responsibility for the attacks.

US House Speaker Nancy Pelosi said Russia should be held responsible for alleged atrocities committed during the invasion of Ukraine, including against children and for using “rape as a weapon of war and starvation as an instrument of war”.

Pelosi, during a visit to Berlin to meet with counterparts of the Group of Seven, said helping Ukraine “requires substantial security support, humanitarian aid, economic aid and sanctions, sanctions, sanctions to ensure” that Russia “feels the pain”.

Russia’s central bank delivered the smallest rate cut since it began easing monetary policy after the invasion of Ukraine, as renewed inflation risks fueled caution as the economy shrinks under sanctions.

Policymakers led by Governor Elvira Nabiullina lowered their benchmark from 8% on Friday to 7.5%. Nabiullina will hold a press conference in Moscow at 3 p.m.