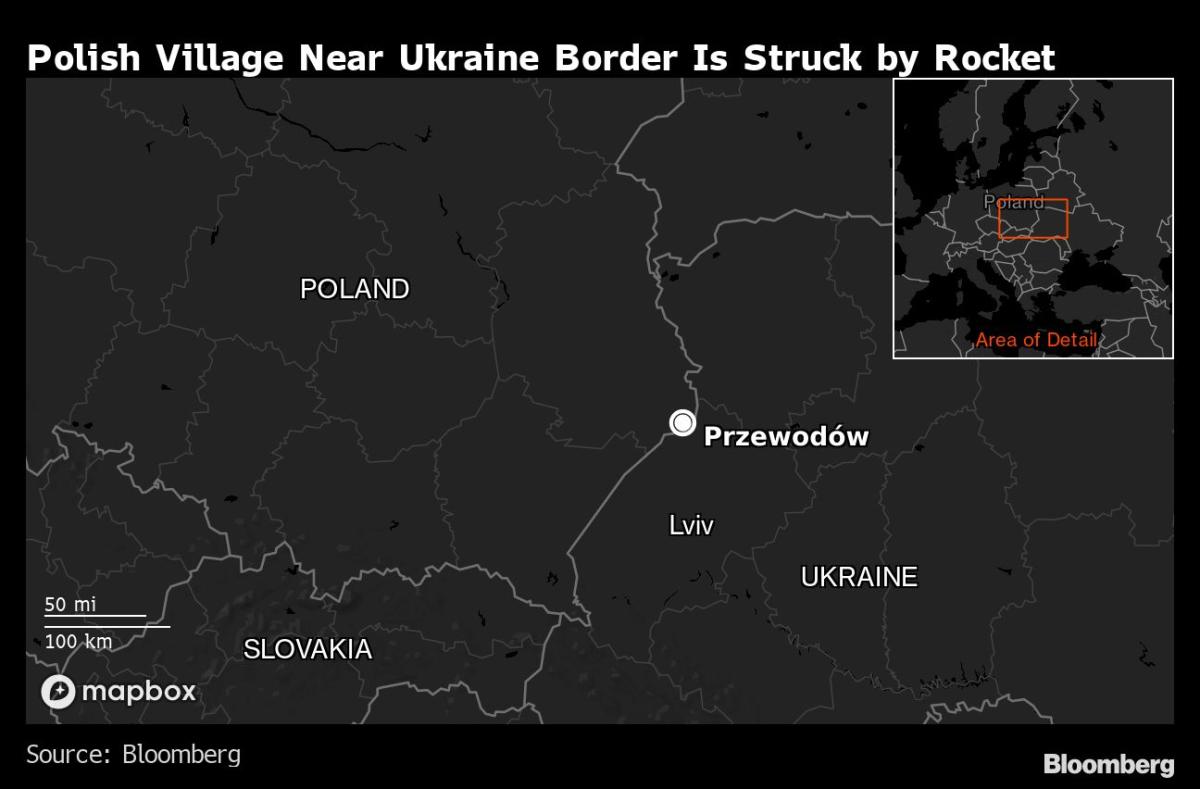 (Bloomberg) — German Chancellor Olaf Scholz said the “amazingly clear words” agreed by the group of 20 leaders in their joint statement on Wednesday show that Vladimir Putin is increasingly isolated by the war.

“The Russian president is almost alone in the world with his policies and has no strong alliance partner,” Scholz told reporters on the sidelines of the meeting in Bali, Indonesia.

President Joe Biden previously pledged “full American support” for a Polish investigation after a missile hit a village just across the border from Ukraine, killing two people. He said “preliminary information” suggested the projectile was not fired from Russia, which denied its forces had aimed missiles at targets along the Polish border. China urged restraint.

(See RSAN on the Bloomberg terminal for the Russian sanctions dashboard.)

According to the latest report from the Washington-based Institute for the Study of War, Russian forces on Tuesday carried out the largest series of missile strikes against Ukrainian critical infrastructure since the start of the war. The Russian military likely used a significant portion of its remaining high-precision weapon systems in the coordinated missile strikes, the ISW said.

China is aware of reports of a missile strike in Poland, Foreign Ministry spokeswoman Mao Ning said at a regular briefing. She urged all relevant parties to exercise restraint and avoid further escalation of the situation.

Sweden has unveiled its largest aid package to Ukraine to date, including 3 billion kroner ($290 million) in military aid and 720 million kroner in humanitarian aid.

Power infrastructure in Ukraine is recovering (8:20 am)

Utilities are gradually resuming in Ukraine’s regions and major cities after damage inflicted by Russian missile fire on Tuesday.

Water and heating are being supplied to customers as usual, while power has been restored in the capital Kyiv after nearly half of residents were shut down, local military authorities said.

Secretary General Jens Stoltenberg will chair a meeting of NATO ambassadors later on Wednesday to discuss the missile incident in Poland and will then brief reporters at the alliance’s headquarters in Brussels.

Ukraine is also deploying the type of Russian-made missile that landed on Polish territory on Tuesday, according to Agnieszka Scigaj, a minister in the prime minister’s office in Warsaw.

Scigaj told broadcaster TVN24 there is so far only evidence of a single missile landing on Polish soil near the Ukrainian border after initial reports pointed to two attacks. Scigaj said the investigation is ongoing and it is still not clear who fired the missile.

A majority of G-20 countries condemned Russia’s war in Ukraine, according to a joint statement released Wednesday following a summit that suggested Putin’s government is becoming increasingly isolated.

US Secretary of State Antony Blinken said he discussed the missile incident — which he called “the explosion in eastern Poland” — with his Polish and Ukrainian counterparts.

“We have pledged to remain closely coordinated in the coming days as the investigation progresses and we will determine the appropriate next steps,” Blinken said in a tweet.