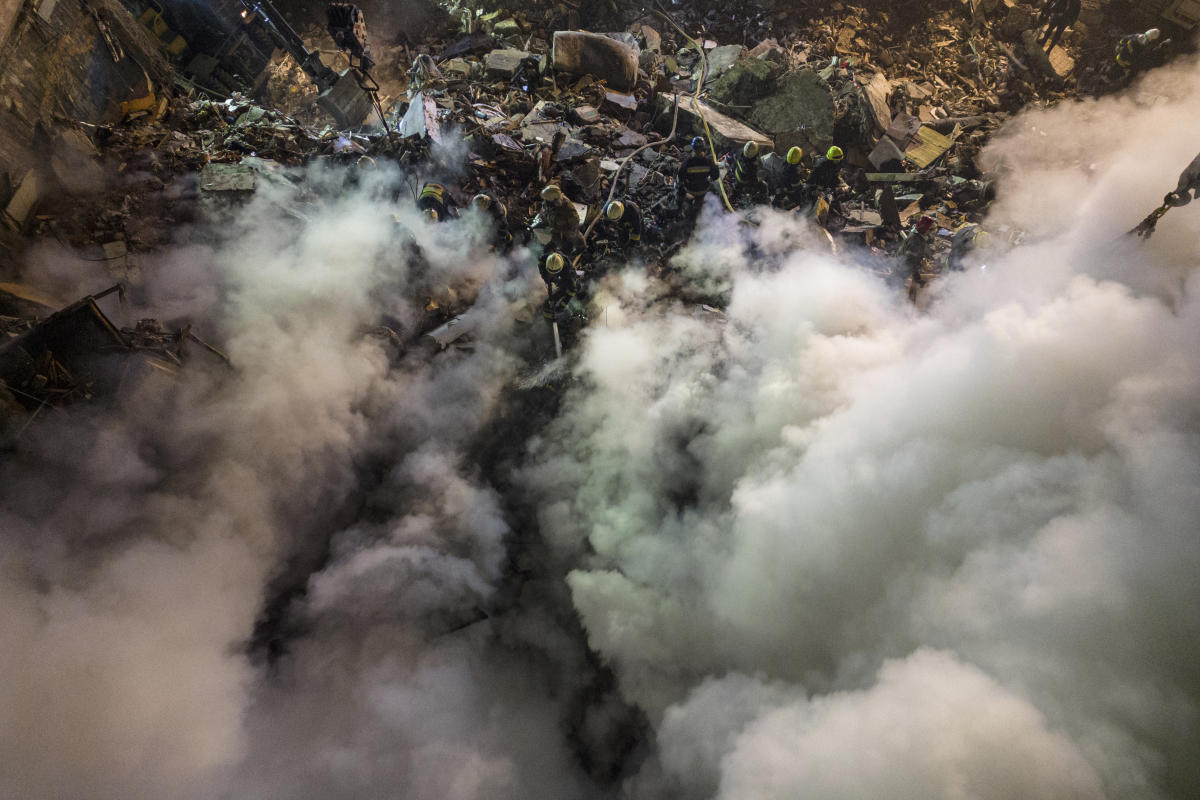 DNIPRO, Ukraine (TBEN) — Rescuers in Ukraine rushed on Sunday to pull survivors from the rubble of an apartment building hit by a Russian missile in the southeastern city of Dnipro a day earlier.

Emergency services worked through the cold night inside the multi-story residential building as the death toll rose to 23, the city government said. The casualties were the worst of a barrage of Russian attacks on several cities in Ukraine on Saturday.

The attacks also targeted the capital Kyiv and the northeastern city of Kharkiv, ending a two-week lull in Moscow’s attacks on Ukraine’s power infrastructure and urban centers.

According to General Valeriy Zaluzhny, the commander-in-chief of the Ukrainian armed forces, Russia fired 33 cruise missiles on Saturday, of which 21 were shot down.

In Dnipro, workers used a crane to rescue people trapped on the top floors of the residential tower that housed about 1,700 people. Some residents begged for help with lights on their cell phones.

The Dnipro city government reported on Sunday afternoon that at least 72 people were injured and 43 people were reported missing. It said 39 people have been rescued so far.

Ivan Garnuk was in his apartment when the building was hit and said he was lucky to have survived. He described his shock that the Russians would attack a residential building with no strategic value.

Dnipro residents joined rescuers on site to help clear the debris. Others brought food and warm clothes for those who had lost their homes.

“This is clearly terrorism and none of this is just not humane,” said a local resident, Artem Myzychenko, as he cleared the rubble.

Russia’s defense ministry claimed responsibility for the missile strikes across Ukraine and said on Sunday it had achieved its goal.

“All designated targets have been hit. The target of the attack has been achieved,” the ministry said in a Telegram statement. It said missiles were fired “at Ukraine’s military command and control system and related energy facilities”, and made no mention of the attack on the Dnipro residential building.

On Sunday, Russian troops attacked a residential area in the southern Ukrainian city of Kherson, regional governor Yaroslav Yanushevich said in a Telegram post. According to preliminary information, two people were injured.

If Russian forces gain full control of Soledar, they could move closer to the larger city of Bakhmut. The battle for Bakhmut has been raging for months, with significant casualties on both sides.

With the protracted war approaching its 11-month mark, Britain announced it will supply tanks to Ukraine, its first donation of such heavy weapons. While the commitment of 14 Challenger 2 tanks seems modest, Ukrainian officials expect it to lead to donations of more tanks from other Western partners.

“Sending Challenger 2 tanks to Ukraine is the start of a gear shift in UK support,” British Prime Minister Rishi Sunak’s office said in a statement late Saturday. “A squadron of 14 tanks will move into the country in the coming weeks after the Prime Minister told President (Volodymyr) Zelenskyy that the UK would provide additional support to help Ukraine’s land war. About 30 AS90s, large, self-propelled guns piloted by five gunners, are expected to follow.

Sunak hopes other Western allies follow suit as part of a coordinated international effort to boost support for Ukraine ahead of the one-year anniversary of the invasion next month, officials said.

The UK’s defense minister plans to travel to Estonia and Germany this week to work with NATO allies, and the foreign secretary will go to the US and Canada to discuss closer coordination.

Meldrum reported from Kiev. Sylvia Hui in London contributed to the reporting.