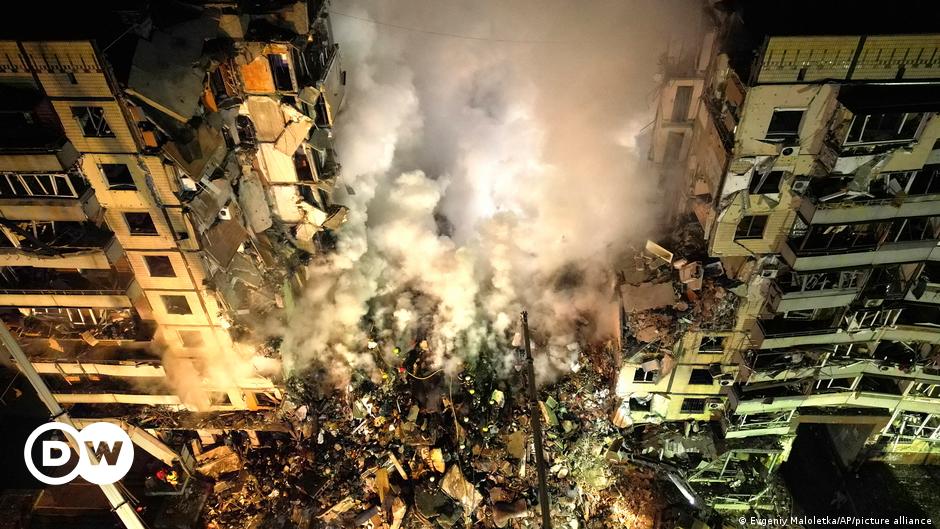 A missile that hit an apartment building in Ukraine’s eastern Dnipro city on Saturday has killed 29 people so far, and about 40 others are still missing, Dnipropetrovsk governor Valentyn Reznichenko said on Sunday.

Reznichenko said on his Telegram account that a search, which had been going on for more than 24 hours, involved 550 people. They included rescue workers, police officers, doctors and volunteers.

A 27-year-old woman was pulled from the rubble on Sunday. She suffered severe hypothermia and was taken to a hospital’s intensive care unit for treatment, Reznichenko said.

The governor added that 39 residents of the stricken building were rescued. Of the 73 people injured in the strike, 30 were hospitalized, 12 of them with serious injuries.

More than 70 apartments were destroyed by the attack, which was carried out with a Russian Kh-22 missile, the Ukrainian army said. The missile is known to be inaccurate and Ukrainian forces lack the necessary air defenses to shoot it down.

Rescuers reported hearing people’s screams under the rubble of the building. Rescue workers were further challenged by freezing temperatures, which hovered around 1 degree Celsius (33 degrees Fahrenheit).

“The chances of saving people are now minimal,” Dnipro mayor Borys Filatov told Reuters news agency. “I think the death toll will run into the dozens.”

Earlier on Sunday, Ukrainian President Volodymyr Zelenskyy said in a Telegram message that the dead included one child and another 13 injured.

“My condolences to all the families and friends of the victims,” ​​he wrote.

On Saturday, Russia also launched attacks on the southern city of Odessa, the eastern city of Kharkiv and the western city of Lviv, in addition to the capital Kiev. The attacks damaged civilian infrastructure, including power plants, and were the first major rocket attacks in the new year, according to the German news agency DPA.

Here are other updates on the war in Ukraine on January 15:

Stoltenberg’s interview came a day after Britain announced it would supply Ukraine with tanks and artillery systems, which Ukraine had long requested. This makes the UK the first country to pledge battle tank support to Kiev.

The new promise has since increased the pressure on Berlin to follow suit.

When asked if he thinks Germany should also offer a similar move, Stoltenberg told the company Handelsblatt newspaper that “it is important that we provide Ukraine with the weapons it needs to win” during what he described as a “decisive phase of the war”.

“German weapons and German tanks are essential for survival,” he told the German news agency dpa. “We have very little time for discussions. And we expect our allies to understand that and act appropriately.”

Makeiev’s call also comes just days before a meeting of defense ministers from Ukraine’s western allies at US Ramstein Air Base in West Germany to discuss further military support for the fight against Russia.

Poland and Finland were willing to provide German-made Leopard 2 tanks as part of a European alliance.

However, a spokesman for the German government said on Friday that it had not yet received an official request from the countries to export the tanks to Ukraine. They need Germany’s permission or risk breaking re-export rules.

Meanwhile, German arms maker Rheinmetall told the Bild am Sonntag newspaper that it can deliver refurbished Leopard main battle tanks from its stock in 2024 at the earliest, “even if the decision is made tomorrow”.

The blast was due to the “careless” handling of a grenade at a cultural center that had been repurposed to store ammunition for the armed forces, Russian media said on Sunday.

The explosion started a fire that reportedly resulted in the hospitalization of sixteen soldiers.

Eight other soldiers were missing on Sunday evening.

Some Russian media reports suggested that the soldiers affected by the explosion were conscripts mobilized to fight in Ukraine.

The Belgorod region is only about 80 kilometers north of Kharkiv, the Ukrainian city that has seen intensified Russian attacks in recent days.

Russian President Vladimir Putin praised Russian forces for their alleged capture of the Ukrainian city of Soledar, while Ukraine insists the battle for control of the eastern city continues.

Speaking in an interview broadcast on Sunday, Putin expressed the hope that Russian soldiers would “please us more than once”.

“There is a positive dynamic, everything is developing according to plan,” said the Russian president.

The Russian Defense Ministry had argued that capturing the city would allow its forces to cut off Ukrainian forces from the nearby, much larger city of Bakhmut.

The Kremlin has made the conquest of the industrial region of Donetsk its main goal after nearly a year of fighting, after being forced to abandon more ambitious goals such as capturing the capital, Kiev, and ousting the Ukrainian government.

British Prime Minister Rishi Sunak promised to deliver tanks and artillery systems to Ukraine on Saturday as Russian missile attacks on the Ukrainian capital and other cities intensify.

Russia’s defense ministry said its forces had taken control of the Ukrainian salt mining town of Soledar in the Donetsk region on Thursday, as Ukraine insisted the fighting continued.