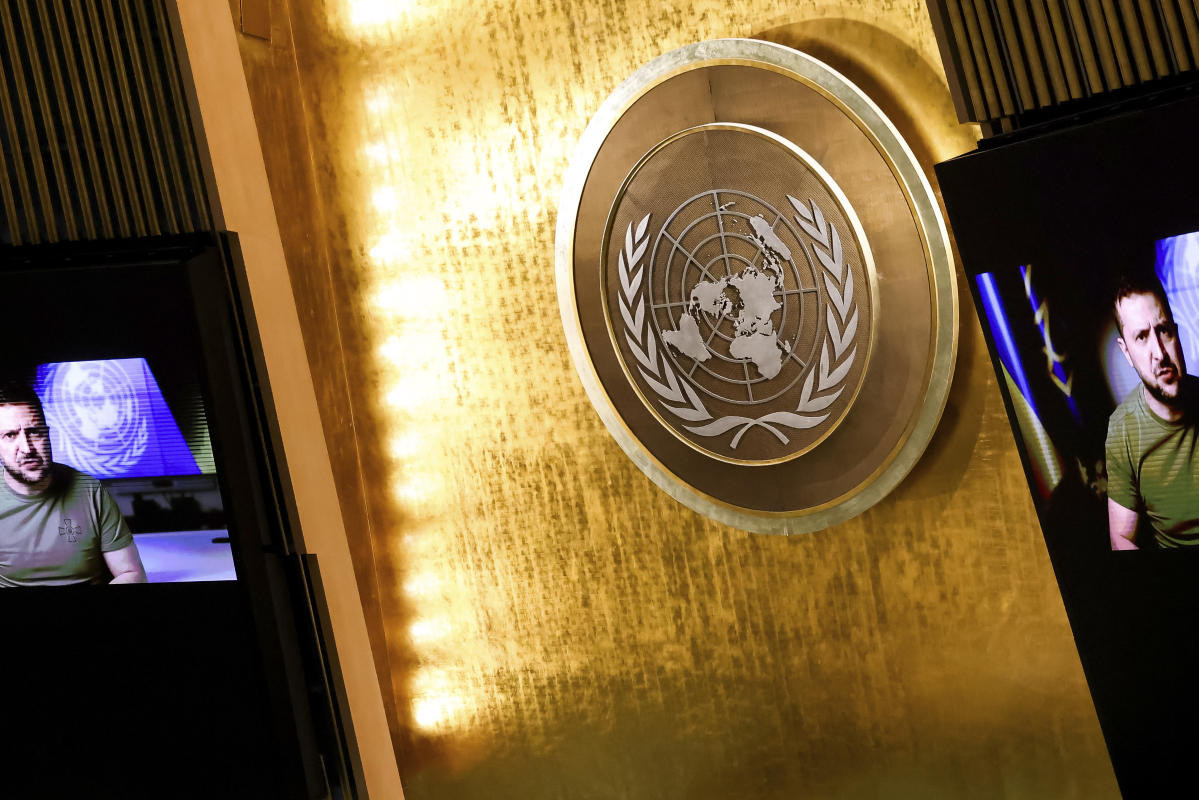 UNITED NATIONS (TBEN) – Ukraine’s president has laid out a detailed case against Russia’s invasion at the United Nations, demanding punishment from world leaders in a speech delivered hours after Moscow made an extraordinary announcement that it would mobilize some reservists for the war effort .

Buoyed by a counter-offensive that has recaptured parts of Russian-captured territory, Volodymyr Zelenskyy vowed in a video speech on Wednesday that his troops would not stop until they had reclaimed all of Ukraine.

“We can return the Ukrainian flag to our entire territory. We can do it with the power of weapons,” the president said in a speech in English. “But we need time.”

Video speeches by Zelenskyy in an olive green T-shirt have become almost commonplace. But this speech was one of the most eagerly anticipated at the UN General Assembly, where war has dominated.

The subject came up in speeches from leaders around the world who deplored the invasion, not least because they said it was not in line with the United Nations’ cornerstone principles — including respect for sovereignty.

“It is an attack on this institution where we are now,” said Moldovan President Maia Sandu, whose country borders Ukraine.

US President Joe Biden’s speech also focused heavily on the war in Ukraine.

The war will remain at the center of Thursday’s meeting, when the Security Council plans to address the issue.

Russia has not yet had its turn to speak at the meeting.

Putin, who is not attending the General Assembly, has said he has sent his forces to Ukraine because of the risks to his country’s security posed by what he sees as a hostile government in Kiev; to free the Russians living in Ukraine – especially the eastern region of the Donbas – from what he sees as the oppression by the Ukrainian government; and to restore what he considers Russia’s historic territorial claims to the land.

Zelenskyy’s speech was distinguished by its context. It took place after the extraordinary mobilization announcement of Moscow. It was the first time Zelenskyy addressed the assembled world leaders since Russia invaded in February. And it wasn’t delivered to the podium where other presidents, prime ministers, and monarchs speak — but instead via video after Zelenskyy was given special permission not to come in person.

Putin’s decree on mobilization on Wednesday contained few details. Officials said as many as 300,000 reservists could be tapped. It was apparently an attempt to seize momentum after the Ukrainian counter-offensive.

But the first such call in Russia since World War II also brought the fighting in a new way for the Russians and threatened to fuel domestic fear and antipathy towards the war. Shortly after Putin’s announcement, flights out of the country quickly filled up and more than 1,000 people were arrested in rare anti-war demonstrations across the country.

Zelenskyy did not go into detail about the developments. But he suggested that any Russian talk of negotiations was just a delaying tactic, and that Moscow’s actions speak louder than words.

“They talk about the talks, but announce military mobilization. They are talking about the talks but are announcing pseudo-referendums in the occupied territories of Ukraine,” he said.

Meanwhile, Canadian Prime Minister Justin Trudeau claimed the mobilization was a sign that it is “failing and fluttering” in Ukraine.

Zelenskky claimed Moscow wants to spend the winter preparing its troops in Ukraine for another offensive, or at least preparing reinforcements, while mobilizing more troops in Europe’s biggest military conflict since World War II.

“Russia wants war. It’s true. But Russia will not be able to stop the course of history,” he said, declaring that “humanity and international law are stronger” than what he called a “terrorist state.”