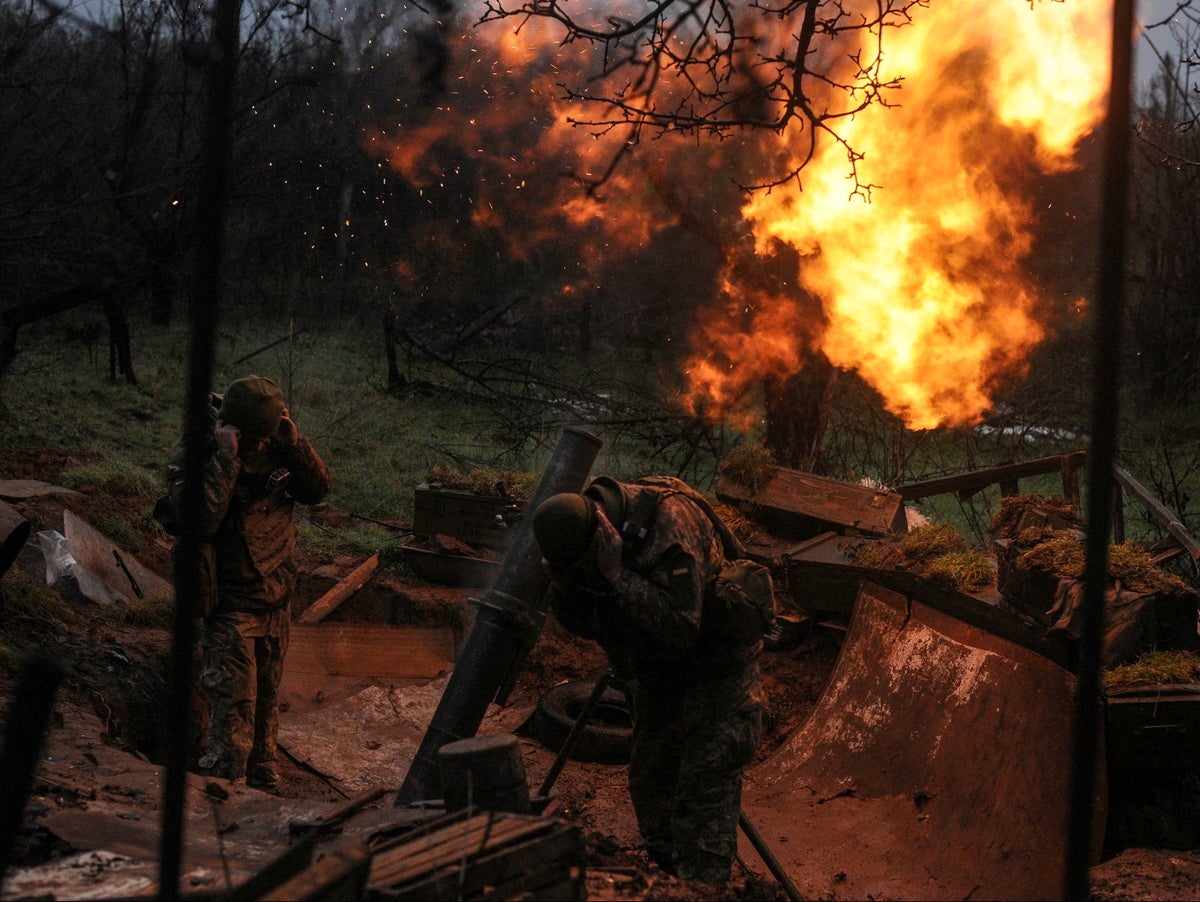 Ukrainian forces target the Kinburn Spit, Vladimir Putin’s only remaining outpost in Mykholaiv, which acts as a gateway to the Black Sea and Russian-held parts of Kherson.

The major development on the battlefield was acknowledged by the Ukrainian military, with a spokesman saying Kiev is “continuing a military operation” in the area – which has been used by Moscow as a staging area for attacks on Ukrainian troops seeking their territory in the south recapture.

Russia has faced monumental setbacks in its nearly nine-month war, and in a rare move, the Kremlin said Putin would meet the mothers of Russian soldiers fighting in Ukraine for the first time as Russia celebrates Mother’s Day this weekend.

Meanwhile, Ukrainian authorities warned that Moscow’s renewed attack on its energy infrastructure has caused “colossal” damage, meaning millions of Ukrainians will most likely live with blackouts until at least the end of March.

While all eyes are on Ukraine, another conflict is licking Russia’s borders

Vladimir Putin stayed away from the G20 summit in Bali to avoid facing his invasion of Ukraine. But this week he will be in the Armenian capital Yerevan as another conflict threatens to spread to Russia’s borders.

While the international focus has been on Ukraine, the violent confrontation between Armenia and Azerbaijan over Nagorno-Karabakh – a disputed region that has led to two wars – threatens to erupt again.

A brief conflict two years ago was followed by a number of large-scale skirmishes, which reportedly left hundreds dead. Civilians have been forced to flee their homes and cultural heritage has been destroyed on a large scale. More than 120 square kilometers of its territory, Armenia says, is now occupied.

Horrific images of atrocities have surfaced on social media, including one of an elderly Armenian villager being beheaded and his head placed on a pig carcass. Another image shows the naked body of a female Armenian soldier with severed legs, gouged eyes and a severed finger in her mouth.

Russian troops ‘on alert’ in Crimea over ‘drone attack’ in Sevastopol

Here’s more from the Russian-installed governor of Sevastopol, who claims the Crimean port is being attacked by drones.

“Our air defense forces are currently working,” Mikhail Razvozhaev said on social media. “There is an attack by drones. According to preliminary information, two UAVs [unmanned aerial vehicles] have already been shot. All troops and services are on standby.”

“No civilian objects were damaged. Please keep calm,” he added.

Two drones were shot down in Sevastopol after air defenses were activated, the Russian-installed regional governor said.

Sevastopol, in the illegally annexed Crimea, is the headquarters of Russia’s Black Sea Fleet.

Last month, Moscow blamed Ukraine – and the “specialists” of the British Royal Navy – for an attack on the port using aerial and naval drones. .

Viktor Orban has sparked a diplomatic spat with Ukraine after wearing a scarf that allegedly depicted Ukrainian territory as part of Hungary – prompting Kiev to summon the Hungarian ambassador.

Opposition politicians in Poland have reacted furiously after President Andrzej Duda was tricked into talking to Russian pranksters impersonating France’s Emmanuel Macron on the night a missile killed two people near the Ukrainian border, fueling fears that NATO was involved in the war. could be involved.

Tomasz Trela, from the left party, called it a “disgrace to the special services and to all those who should check who they allow to contact the top leader”, adding: “This is a blow to our safety and for the opinion we hold.” in the eyes of our allies.”

During the seven-minute phone call, posted online by the Russian pranksters – who have previously defrauded Mr Duda, Boris Johnson and Mr Macron – the Polish president could be heard relaying details of the blast and speaking of his plans to open NATO talks to request. Mr Duda is heard saying that US President Joe Biden did not blame Russia for the missile incident, but Ukrainian Volodymyr Zelensky insisted it was a Russian-launched missile. The Polish president adds that he himself is “extra careful” not to blame Russia.

Japan has announced about $2.5 million in aid to Ukraine to supply it with generators and solar lanterns in the event of a power outage this winter.

“The government of Japan will continue to support and assist the struggling people of Ukraine in cooperation with the international community, including G7 members,” Toyko’s foreign ministry said.

The US will soon begin transferring $4.5 billion in aid to Ukraine

The US will begin disbursing $4.5 billion in pledged economic aid to Ukraine in the coming weeks, Washington Secretary of the Treasury Janet Yellen said.

The funds, which were approved in September, were designed to “strengthen economic stability and support key government services,” Ms Yellen said in a statement.

Other donors should also step up and accelerate their aid to Ukraine, she added.

Cuban President Miguel Diaz-Canel tried to blame NATO for the war in Ukraine during a speech to the Russian parliament.

“The reasons for the current conflict in this zone must be sought in the aggressive policies of the United States and the expansion of NATO into Russia’s borders,” said Diaz-Canel — an argument that Ukraine and its Western allies reject as a false one. justification for The illegal invasion of Russia.

He and Vladimir Putin today unveiled a monument to Cuban revolutionary leader Fidel Castro in a Moscow square, pledging to deepen their friendship in the face of US sanctions against both nations.

Putin told Diaz-Canel that the two countries should build on the “solid foundation of friendship” between Castro and the Soviet leadership.

Russia prepares to field up to 700,000 men in new round of mobilization, Ukrainian claims

An adviser to the Ukrainian government has claimed that Russia is preparing to call up to 700,000 people in a second wave of mobilization to take place in January.

The 300,000 reservists called up during Vladimir Putin’s “partial mobilization” that began in mid-September have “already been killed,” wounded or demoralized, Anton Gerashchenko, an aide to Ukraine’s interior minister, claimed.

Yesterday, the Kremlin rejected claims that talks were underway about a second round of mobilization — similar denials, however, were made by the same spokesman, Dmitry Peskov, just a week before Putin’s “partial mobilization” in September.

Germany “must be ready for an escalation” of the war in Ukraine, says Scholz

Germany must be ready for an escalation of the war in Ukraine, Chancellor Olaf Scholz said.

“Given the development of the war and Russia’s visible and growing failures, … we must be ready for an escalation,” Scholz said at a conference in Berlin organized by the Sueddeutsche Zeitung.

Mr Scholz said his recent trip to China was worth it just to clarify the two countries’ common stance against the use of nuclear weapons.