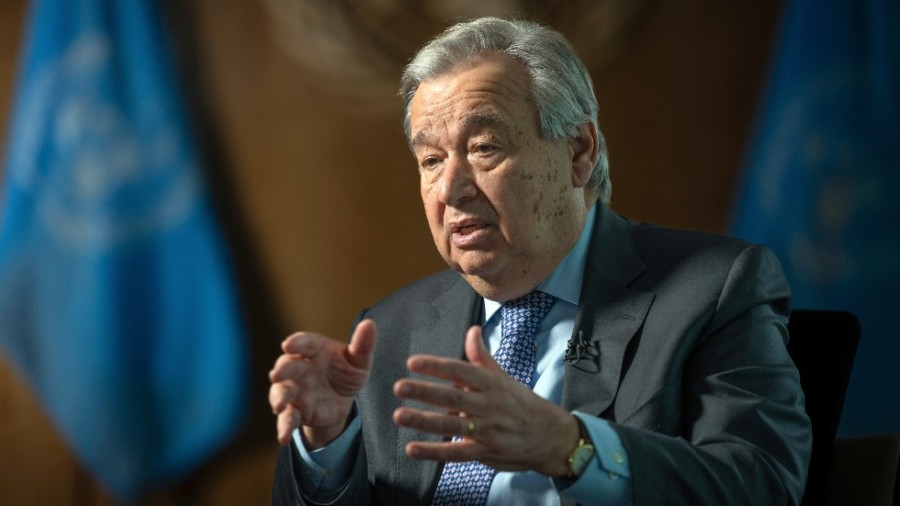 United Nations Secretary-General António Guterres said Wednesday at the World Economic Forum’s annual meeting of world leaders and business leaders that the commitment to limiting global temperature rise is “almost going up in smoke” as the planet heads for climate catastrophe.

“We are flirting with the climate catastrophe. … The commitment to limit global temperature rise to 1.5 degrees is almost gone up in smoke. Without further action, we are heading for a 2.8 degree rise and the consequences, as we all know, would be devastating,” Guterres told the elite audience at the Swiss ski resort of Davos.

“Various parts of our planet would be uninhabitable. And for many it will be a death sentence,” he said.

The Secretary-General has been outspoken about the dangerous climate crisis and the need for urgent action to try to contain the most extreme consequences of the expected devastation.

“This is no surprise. The science has been clear for decades and I’m not just talking about UN scientists. … We learned last week that certain fossil fuel producers in the 1970s were fully aware that their core product was destroying our planet,” Guterres said. “Some in Big Oil are peddling the big lie.”

The UN chief warned of greenwashing in pledges by countries and companies to reduce greenhouse gas emissions, urging the Davos crowd to develop and adhere to “credible and transparent” strategies to achieve net-zero emissions .

“Today, fossil fuel producers and their facilitators are still racing to expand production, knowing that this business model is inconsistent with human survival. Now, this madness belongs in science fiction, but we know that the collapse of the ecosystem is cold hard science fact.

The climate crisis would be difficult for the global community to address even in a time of widespread peace and prosperity, Guterres said, but the world faces a series of interrelated issues that make action more difficult — though no less urgent.

Guterres said the world community is looking at a “Category 5 hurricane” and a “perfect storm” of issues ranging from the global economic crisis to the war in Ukraine to the East-West divide between the US and China.

“Dear friends, all these challenges are interrelated. And they pile up like cars in a chain reaction crash,” the UN chief said.

Climate change is contributing to the spread of antibiotic-resistant ‘superbugs’: UN report

The Bharat Express News - February 8, 2023 0
The US Navy has released photos of the cleaning mission of the Chinese spy balloon that traveled over US and Canadian soil over the...